David John Douglass is a writer, historian and political activist in Tyneside and Yorkshire.

The coalfields of the 20's were a hotbed of discontent and militant communist agitation. The Bishop of Durham Dr Hensley Henson said that his Durham diocese was the most communistic in Britain and could anyone wonder why ? In 1928 Scottish and Northern Communists of the Communist Ex-Servicemen's Labour League, dressed in their khaki uniforms stormed the platform of the Durham Miners' Gala. The much-respected Communist MP Shapurji Saklatvala had called from the platform for the Scottish miners to be given the right to speak, something which would never sit well with the deeply formalistic DMA Executive.

It was against such a background and ruling-class fears that the British working class would follow the Soviet example to revolution, that two football teams of northern pitmen were forging their mark on the game - Ashington in Northumberland and Durham City in Co Durham. Both were founder members of Division 3 (North) in 1921.

The standing stones of bitter and epic battles of the union from its inception in 1825, leaders who dragged themselves and their workmates up by their bootstraps with vision and principle, through great Northern Coalfield strikes of the Durham and Northumberland miners and national actions over 150 years will be well known to many former miners.

The major disasters, whose impacts were scorched into the collective memories of northern coalfield communities likewise will come as no surprise to many of my generation and previous ones. What is novel in this interesting wee book is the parallel struggles on the pitch as the colliers, through strikes, disasters, lockouts and unbelievable hard work, battled for their teams. This is a social, political and sporting tale interwoven in a way I have not see or thought about before. Men whose prowess on the field spared them no mercy down the pit at the coalface, or the punishing shift work they all still engaged in. The team interestingly played in black and white stripes, which were the traditional Northumberland County colours. Jon Tait retraces the blow by blow action on the pitch and the triumph over many neighbouring teams, and the starry trajectory of some of their players. 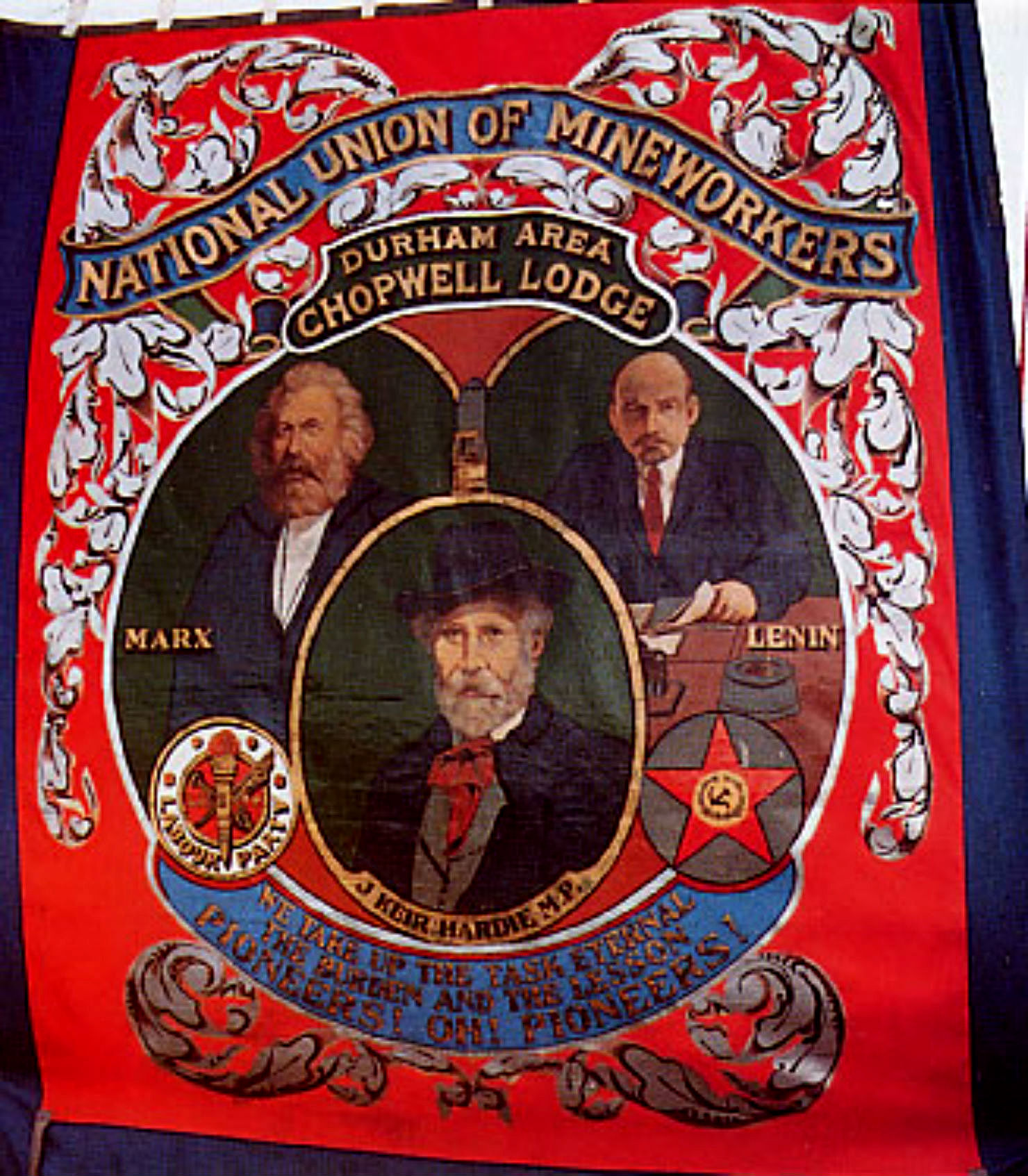 The book has a number of interesting insights and cameos. Not least the chapter on 'Little Moscow' and the red village of Chopwell. One of the most militant pits in the whole northern coalfield, it threw up some giants of men as leaders, not least the Lawther family whose dynasty in the miners and left movement generally is remarkable still. It produced the first of the three 'red banners' which carried among them the images of Marx, Lenin, Keir Hardie, Arthur Cook and in the uniform of the Irish Citizens Army in which he died fighting for Irish freedom, the bold James Connolly. Unique in their far left trajectory, the banners from Chopwell, Follonsby (Wardley) and Bewick Main, were all from Gateshead.

As for the football overlap, Ashington was the farthest north team in the Third Division North. In the 1926/7 campaign almost the entire team hailed from Northumberland, with the rest from 'the toon' or villages in Co. Durham. Their key striker and captain Price was though a Scot, close enough. The book records the matches, the scores, the defeats, the stars and the triumphs. What makes it fascinating for me is its description the social, industrial and political backdrop against which these games were played - a time when the stands are sparse because of pit closures and mass layoffs, the world is glutted with coal and cheap imports, and real poverty results for the northern population. It is also a remarkable piece of journalism to be able to retrace the games, the images and the atmosphere from so long ago. Another of the football chapters reveals the extent to which Northumbrian/Tyneside players influenced the birth of the game on the other side of the Atlantic, after first having cut their football teeth with the colliers. Small world, eh ?

I have not however in this review greatly focused on those chapters retelling the fortunes of the clubs and players, though they are a rich source of sporting history, with I have no doubt priceless and little known facts , thoroughly well researched.

Like any true record of the labour movement on Tyneside the history records the role of the Irish. Garment Workers union leader James Cuthbert Laird was a founder member of Newcastle and Gateshead Trades Union Council in January 1873 and remained its president for twenty years. He was also remarkably President of the TUC when it met in the Mechanics' Hall in Newcastle in 1876, with unions representing half a million workers. Laird had graduated to his trade in 1854, in time to play a leading role in the dynamic Newcastle tailors' strike that year. One tends not to associate Newcastle strikes with tailors, but trade unionism was spreading like wildfire across all trades and skills during this period. The miners of Northumberland and Durham resolved that none of their members or families would deal with any firm which didn't agree to the tailors' terms. That would have been some purchasing power and a major incentive to settle.

Chapter 7 touches on the legend that is Jack Charlton (Big Jack), a Northumbrian through and through, his family a bedrock of what was known nationally at Britain's biggest pit village Ashington. The author declares that he was among other factors a major influence:

The strike of 84/5 came during my formative years - a heady mix of football, teenage girls, Adam and the Ants, writing, the CPGB, the NUM and Arthur Scargill. Jack instilled a sense of social responsibility in me, a hatred for injustice and a strong belief in the Trade Union Movement for the good of the wider community and for social change.

A few of the Charltons had been involved in organising the Communist Party in Ashington, and played a leading role during the war years. James Charlton had stood as a Communist councillor in the Ashington Urban Council elections of 1948, along with three other Communist candidates. The role of the North East in the fight for Spanish socialism against fascism is well known, a number of famous northern working-class leaders made that stand, and many paid with their lives. The author reckons that 100 men and women from the North East went off to fight in Spain during the Civil War.

One of the unavoidable features of Northumbria and Durham working peoples' history is the tendency to physical resistance. This is born of class struggle of course, but also the apparently contradictory influences of Jacobites and Jacobins. The large presence of Irish republicans in the region ensured the armed-struggle tendencies of that aspiration featured deeply on Tyneside and the coalfields. So it was enjoyable to find another cameo in that long tradition - Percy Gibson, a Seghill miner and member of the CPGB, who had came with an IED in 1924 to the Quayside. His target was either the Town Hall or the cylinders of a power station, to throw Newcastle into darkness and allow the impoverished masses to loot the shops. He thought he was meeting some fellow communist insurgents. Sadly, although they were indeed fellow members of the CPGB they had sold him out to the cops with whom they were working.He went down 'for the cause' he thought he was serving.

This is a simple wee book, quietly and honestly spoken and bvery well researched. it is a cameo of the northern working class, how it was composed, what it stood for, and how that was represented on football fields, battlefields, picket lines, and coalfaces. It is insightful and deeply moving in parts, a story of football, hardship and families, a story of an industry now gone.

It makes me reflect and question when people say, 'why can't you forget all that and just move on?' What it is we're moving on from, given what we had, the depth of that comradeship and hope and vision? And what exactly are we moving on to?