Tim Hollins is a musician, educator and cultural activist.

50 years ago, in 1972, the great Chilean singer song-writer Victor Jara released one of his final albums, ‘La Población’ . It consists of 9 songs which tell the stories of previously homelesss people, living in a shanty town in Santiago. It became an iconic musical testimony of their struggles to occupy scrubland and build a home – a community – and also featured the recorded voices of these people. And the community is still there today.

In some ways it also is a musical document of the victories and hopes of the popular movements who had elected Salvador Allende in 1970, on a platform of radical social and economic change. After the 1973 military coup, which resulted in the death of Allende and Victor Jara, as well as many thousands of others, all of Victor Jara’s music was banned in Chile. Today his voice rings out louder than ever. They can kill the singer – but not the songs.

To receive the zoom log in directly, just email : This email address is being protected from spambots. You need JavaScript enabled to view it.

On September 18th this year, the Victor Jara festival “El Sueño Existe” – the Dream Lives On – will be presenting an evening zoom celebration of the album ‘La Población’, looking at the context, methodology, and the times in which it was created, hearing from the community, and presenting new versions of the songs Victor Jara wrote, performed by a wide variety of singers, musicians and choirs – both in the UK and from Chile. It’ll be an inspiring and uplifting evening – and replaces the cancelled 2021 festival.

The ‘Toma’ – Seizing the Land

The community featured in the album, Herminda de la Victoria, was the result  of a ‘toma’ (or land seizure). By the 1960s large numbers of people were arriving in the city from the countryside, but there was little available housing for them. For years these internal migrants,  in Santiago as elsewhere in Latin America cities, had occupied land and housed themselves as best they could, but the pobladores at Herminda were very organised. Local leaders ensured they were well motivated and could access external support. And as one of the pobladores recounts on one of the album's tracks, when their original site was discovered, they were able switch to an alternative at the last minute.

The Pobladores erected tents and shacks during the night. As with any toma at that time, the police would attempt to evict them, and around 400 police attacked using tear gas, forcing the pobladores into a small part of the land, and cordoning them off. The pobladores managed to hold on, surrounded, with the police initially refusing to let any supplies in. Local radical politicians (including Salvador Allende) supported the toma and the ongoing, eventually successful negotiations.

Why ‘Herminda de la Victoria’ ? Herminda Alvarez Chavez was a baby who died soon after the toma. Some say she was shot or tear-gassed, but most likely she died of illness when there was little medical treatment available. Naming the new community in memory of the baby and the victory of the people helped to unify the group at a difficult time. Her death would not be in vain, their suffering and organisation allowing them to eventually create a home of their own. One of the songs on the album is a lullaby for the dead child, ‘who died before she had a chance to struggle’. 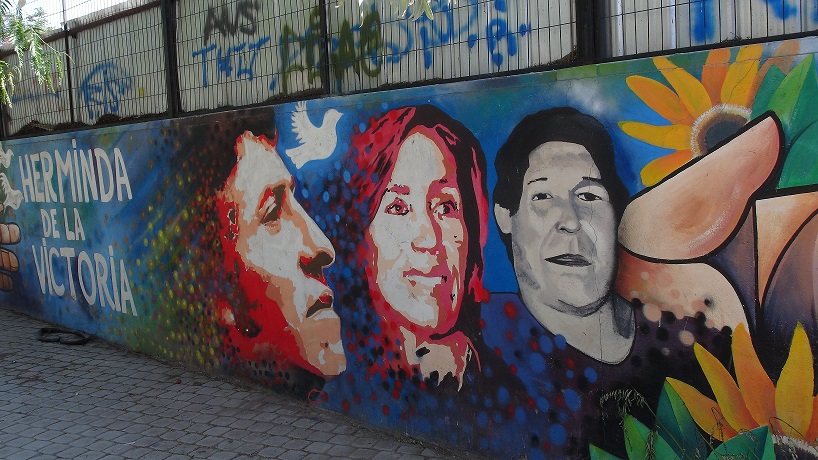 A modern mural within Herminda

After weeks of negotiations, the government agreed to provide land, in another location. The new site lacked water, electricity, sewerage and paved roads. A key feature of the ‘Poblador’ movement : “Build everything ourselves”, comes through in Victor Jara's celebratory song ‘Man the Creator’, in which he sings “With my pure ability, I worked for them as a carpenter, as a plasterer and a bricklayer, as a gas fitter and a lathe-turner.”

Before and especially after Allende’s election as President in 1970, direct action of all kinds flourished in Chile, including many more land seizures that resulted in self-build housing. Herminda was followed by an increasing number of tomas, probably hundreds by 1973.

Uniquely the toma at Herminda was celebrated in song. By 1971 Victor Jara had produced 6 albums, including several songs about the lives of urban and rural workers. In Joan Jara's account, this whole album would be a new departure, providing a voice for the voiceless and marginalised. She describes it as happening by chance when a Poblador said to Victor : “If you're looking for something to sing about, why don't you come to our community, Herminda?” Later Victor Jara wrote: “I had to spend a lot of time researching the struggles of the pobladores, …...with a tape recorder in my hands. How much music there is in these stories, how many books could be written about them!”

Barely a year after its launch, this music, and much more, would be banned in Chile. As someone who was in Santiago at the time of the coup put it : “On the day before the coup, everything was possible. From the day after the coup, nothing was possible”.

The Población of Herminda de La Victoria survived the terrifying years of the  dictatorship, despite regular military attacks, disappearances, murders of leaders, and the shooting of demonstrators with live bullets, including after a demonstration against Pinochet when he visited the locality in 1988. In Herminda today this history is told through the many murals around the community, educating the new generations about the struggles to create, build and defend the community. 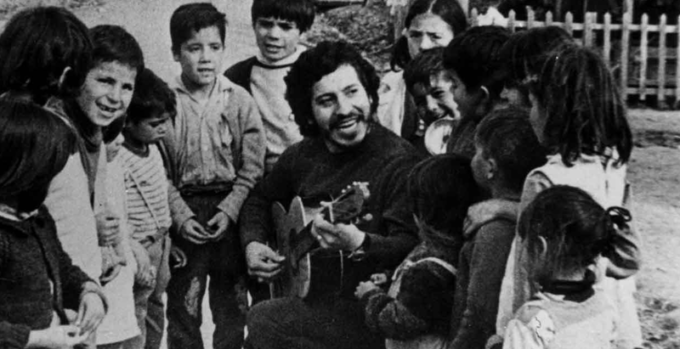 Victor Jara singing for the children of Herminda, in 1972

‘La Población’ will be recounted and celebrated in song and murals, with contemporary and archive film, during the 18th September zoom event. There will be Spanish interpretation available throughout for Latin American friends.

The “El Sueño Existe” festival normally happens every summer in Machynlleth, Wales, and draws a fantastic crowd of Latin American exiles, academics, dancers, journalists, singers, activists, musicians – and festival goers – to celebrate Chilean ‘New Song’, and to bring together modern politics and cultures, struggles in Latin America and closer to home, through every conceivable art form – all in a glorious coming together in beautiful West Wales. All information (including 2022 weekend dates), videos of past festivals etc. are on the festival website.

You can watch a short film about the songs, the album and the festival here:

You can listen to the whole original album of La Población (55 mins) on Youtube here: