Caroline Anjali Ritchie discusses William Blake, trees, and 18th-century radicalism. Image above: The Divine Image, from Songs of Innocence and of Experience

Poet and artist William Blake was energetically engaged with the political thought of his day. His ties to the radical publisher Joseph Johnson and associated figures such as William Godwin and Mary Wollstonecraft in the 1780s and ‘90s are especially well known. In this article, I want specifically to explore one aspect of Blake’s radicalism that situates him firmly within the ferocious revolutionary debates of 1790s Britain, in the immediate wake of the American and French Revolutions.

Radical: the word’s etymology (from Latin radix, -icis, meaning ‘root’) is laden with metaphorical force. In its now-prevalent political sense, it refers to fundamental systemic change from the roots up. Its political usage appears to date back to British Whig politician Charles James Fox, who in a 1797 speech called for the ‘entire radical reform in the whole system of Government.’ Fox’s usage of the term ‘radical’ in this period seems to play into a wider discourse in which trees figured as symbols of states. Imagery of trees continually furnished artists and commentators with a rhetoric of the growth and health of one political system or another. Pitted against the image of the deeply rooted old oak of the British establishment as described for instance by Edmund Burke, the ‘Tree of Liberty’ became associated with the newly sprouting French and American Revolutions and especially with the Foxite cause in Britain, sometimes—though definitely not always—in a celebratory sense. 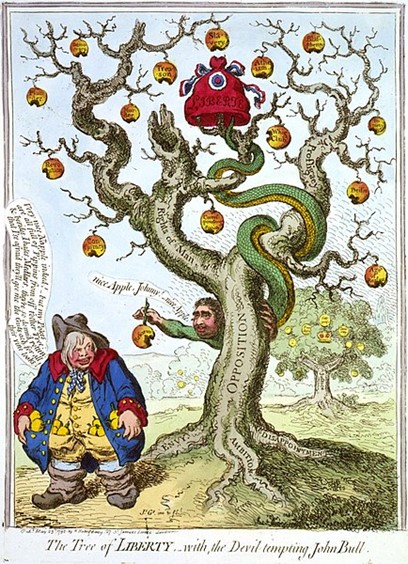 In the illuminated books of William Blake, more trees were taking root: here we find mention of a ‘Tree of Mystery’ and a ‘Poison Tree.’ Blake’s trees figure as contraries to loyalist satires against the ‘Tree of Liberty,’ standing in both religious and sociopolitical terms for rigid systematicity and an old patriarchal order. In this article I want to focus on two things. Firstly, the fact that Blake’s arboreal anti-ideal is so deeply embedded in the debates of the 1790s offers an illuminating vista into his direct engagement with the politics and visual culture of his time, a complex and energetic engagement that has been more fully elucidated by scholars such as E. P. Thompson, Jon Mee, Ian McCalman, and Saree Makdisi, among many, many others. Secondly, Blake’s imagery of conservative, outdated systems as insidiously rooted trees literalises the meaning of the word radical and typifies Blake’s struggle with the very notion of systematicity, with the problematic ways in which systems can come to structure and constrict our ways of thinking, being, and knowing.

Blake’s tree imagery suggests a remarkable conversancy with diverse branches of radicalism in the 1790s. One author whose work Blake was aware of is Thomas Paine, author of The Rights of Man and many other tracts in a rationalist radical spirit. Paine had urged readers to take an ‘axe to the root’ of the system. Meanwhile, radical publisher Daniel Isaac Eaton’s Politics for the People (1794) included a contrast between the Tree of Liberty and the ‘Upas, or Poison Tree’ of monarchy, and many scholars have noted that this was a probable source for Blake’s ‘A Poison Tree’ and ‘The Human Abstract’ in Songs of Innocence and of Experience, and of the Tree of Mystery that appears in The Book of Ahania. As Jon Mee has highlighted, another ‘popular’ radical pamphleteer, Thomas Spence, also adopted similar imagery in a passage from The Rights of Infants (1797):

All dominion is rooted and grounded in land, and thence spring every kind of lordship which overtops and choaks all the shrubs and flowers of the forest. But take away those tall, those overbearing aristocratic trees, and then the lowly plants of the soil will have air, will thrive and grow robust. Nevertheless, take care you leave not any roots of those lordly plants in the earth, for though cut down to the slump like Nebuchadnezzar, yet if any vestage of the system remain, any fibre of the accursed roots, though ever so small lie concealed in the soil, they would sprout again and soon recover their pristine vigour, to the overshadowing and destruction of all the undergrowth. Thus do philosophy and the purest philanthropy compel us to eradicate this baneful order from human society. - in Mee, Jon, Dangerous Enthusiasm: William Blake and the Culture of Radicalism in the 1790s, Oxford: Clarendon Press, 1992, p.102

Spence’s language of ‘roots’ and ‘eradicat[ion]’ (from the same etymological ‘root’ as ‘radical’) is here connected with Nebuchadnezzar, the notorious Babylonian tyrant often associated with the resistance of monarchism to change. Blake himself famously portrayed Nebuchadnezzar as a crawling, abject figure in his The Marriage of Heaven and Hell, later represented in the 1795 colour print Nebuchadnezzar. 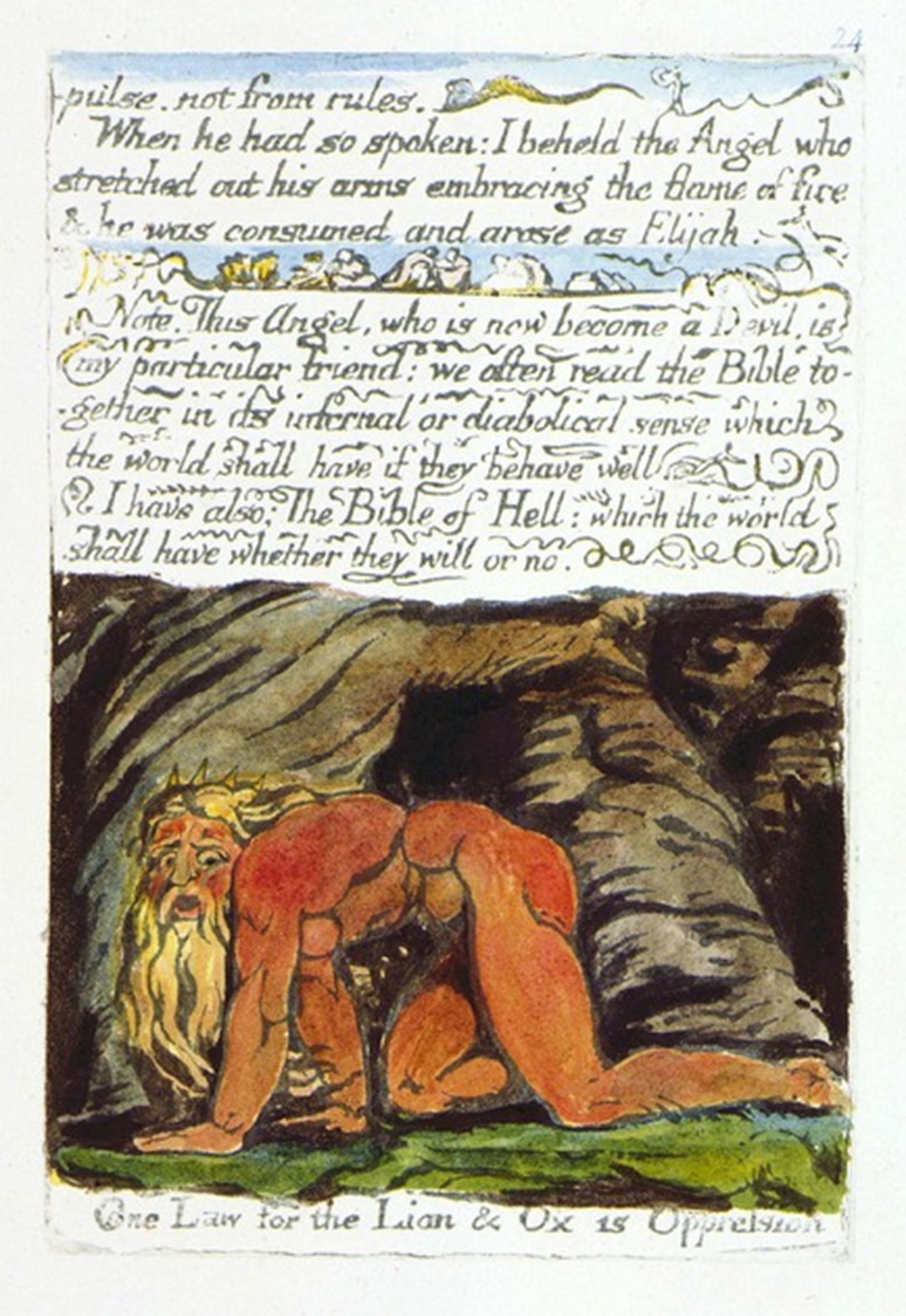 From The Marriage of Heaven and Hell (copy D), Library of Congress.

The madness of Nebuchadnezzar, here depicted by Blake, was frequently associated with George III’s episode of ‘madness’ in 1788-9, and it seems likely that many of these commentators (including Blake) had this in mind and were bringing it to bear in their criticisms of the monarchical order. Underneath Blake’s depiction is the printed line: ‘One Law for the Lion & Ox is Oppression,’ functioning as a kind of subtitle identifying King Nebuchadnezzar as the very embodiment of oppression.

Let’s look at Blake’s ‘The Human Abstract,’ which is haunted by the image of both the oppressive tyrant and the dangerously deep-rooted tree: 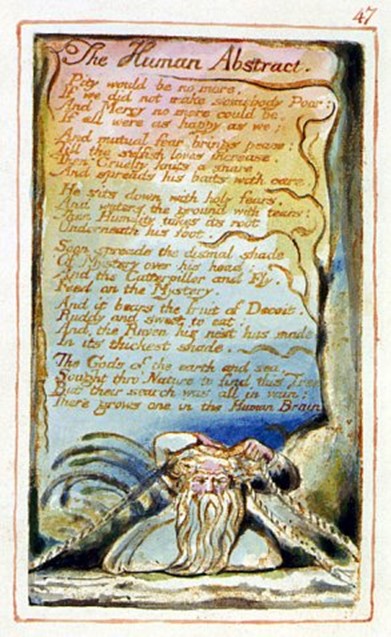 The Human Abstract, from Songs of Innocence and of Experience (copy D), Library of Congress.

Pity would be no more,
If we did not make somebody Poor:
And Mercy no more could be.
If all were as happy as we;

And mutual fear brings peace;
Till the selfish loves increase.
Then Cruelty knits a snare,
And spreads his baits with care.

He sits down with holy fears,
And waters the ground with tears:
Then Humility takes its root
Underneath his foot.

Soon spreads the dismal shade
Of Mystery over his head;
And the Catterpillar and Fly.
Feed on the Mystery.

And it bears the fruit of Deceit,
Ruddy and sweet to eat;
And the Raven his nest has made
In its thickest shade.

The Gods of the earth and sea,
Sought thro’ Nature to find this Tree
But their search was all in vain;
There grows one in the Human Brain

‘The Human Abstract’ is a terrifying, and terrifyingly powerful, poem. Despite its seemingly simple, sing-song form, the poem bristles with a kind of sharp, raw anger that is characteristically and wonderfully Blakean. As ‘Cruelty’ slowly but surely roots itself into the earth, the ‘dismal shade’ of obscure ‘Mystery’ begins to settle overhead, and the shrunken, benighted shadow of humanity coalesces into a self-enclosed world of ‘thickest shade.’ The figure Blake has included in the design to the plate, with hunched, low posture recalls the earlier depiction of Nebuchadnezzar in The Marriage. Here, the old bearded man can be associated with the figure of Urizen, who in Blake’s idiosyncratic mythology embodies all manner of oppressive forces, including patriarchy, tyranny, and abstraction. ‘Mystery,’ for Blake, figures as the very inverse of Liberty, and here we find Urizen either bound to or trying to bind the earth, as the claustrophobic columnar trees to either side of the text appear as firmly rooted pillars of a stubborn and age-bound system.

We might contrast Blake’s ‘The Divine Image,’ from Songs of Innocence, in which the freer-flowing, minimally rooted vegetation seems to evoke a bright flame of liberty rather than opaque ‘Mystery’ or—in the terms of the revolutionary debates—a kind of stiff, oakish conservatism. 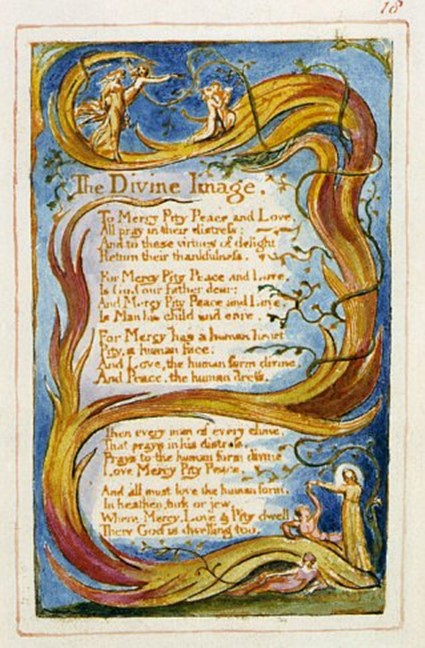 The Divine Image, from Songs of Innocence and of Experience (copy D), Library of Congress.

We might think of the lambent growth in this design as a kind of reimagined Tree of Liberty in a visionary spirit that tunes into the language of popular millenarianism as expressed, for instance, by Thomas Spence in the passage quoted above. On such occasions Blake shows himself to be immersed in the political debates of his time on the deep level of iconographic morphology.

Although he does not make the comparison to ‘The Human Abstract’ and ‘The Divine Image’ directly, Rose writes of the imagery of ‘roots’ and ‘flame-wave shapes’ in Blake’s prophecy America as constituent parts of a strongly political visual lexicon:

The double symbolism of these roots and the flame-wave shapes together with the coiling vines indicates that new life is beginning to grow and flame out, that the human spirit can no longer be buried, that freedom or, more properly, the desire for freedom is to be found at the roots of eighteenth-century civilization. - Rose, E. J., ‘Blake’s Human Root: Symbol, Myth, and Design,’ Studies in English Literature, 1500-1900, pps. 575-90

Blake’s radical imagery—his imagery of roots—shows him to be deeply concerned with the kind of traditions and systems that need to be weeded out in order to promote real regeneration, real liberty. Yet, for Blake, the issue runs deeper than a mere shuffling of political structures: the Tree of Mystery has sunk its roots into the Human Brain to such an extent that its deracination can only be achieved on a total scale, at every level of thought and being. In this regard, Blake is one of the most deeply, most literally radical figures in eighteenth-century art and literature.

Caroline Anjali Ritchie is a poet and researcher living in London. She is currently completing a PhD on the poetry and art of William Blake.