Tara Hanks writes about aspects of popular culture for a variety of websites and publications.

Artist Fionn Wilson is the curator of Dear Christine: A Tribute to Christine Keeler, an exhibition featuring her paintings alongside the work of twenty women artists in a variety of media, now on display at Arthouse1 in London until February 29. Dear Christine addresses issues of class, gender and sexuality as experienced by a beautiful but vulnerable young woman from humble origins who found herself at the centre of the Profumo Affair, hastening the collapse of Harold Macmillan’s Tory government in 1963. 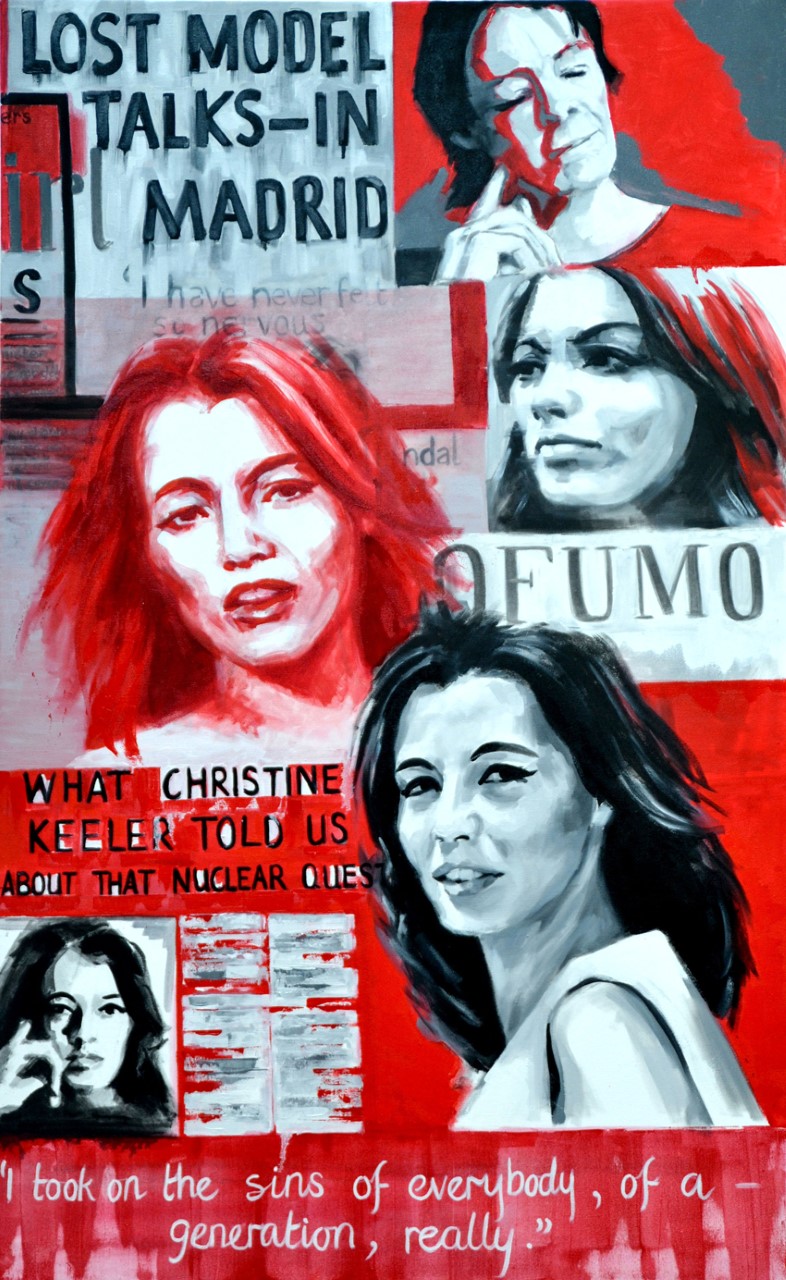 In your foreword to the catalogue for Dear Christine, you recall watching Scandal, the 1989 film about the Profumo Affair, as a teenager. Why do you think your interest has endured?

When I first became aware of the Profumo Affair via Scandal back in the eighties, I could relate to Christine Keeler’s story, in particular, in a very personal way. Growing up in Newcastle upon Tyne, my coming of age was sometimes difficult for various reasons and I used to escape into the world of retro glamour from the fifties and sixties, copying the style of film stars and reading their biographies borrowed from Newcastle Central Library.

I was brought up a Catholic and was intrigued as a child by the beautiful faces of the female saints, lit by candles in churches. I think that, in some way, I associated beauty with virtue. I was convinced that Marilyn Monroe was an angel the first time I saw that famous image of her in a golden dress, head tilted back, eyes half closed.

I saw beauty as some sort of liberation from the everyday mundane and I recognised immediately that Christine saw her own physical beauty as a possible tool to use to escape a miserable life. I was also becoming quite politically aware around the time of the release of Scandal and the obvious injustice and Establishment coercion involved in the narrative of the Profumo Affair made me want to know more. These themes have continued to be of interest to me through the years and, as part of my painting journey which began in 2010, Christine Keeler came back to me as a perfect focus for a series of portraits.

Why has Christine Keeler inspired artistic interpretations – from Lewis Morley to Pauline Boty – more so than other famous figures connected with the events of 1963 (like Mandy Rice-Davies?)

Mandy Rice-Davies thrived and danced her way through the chaos, which is wonderful, of course. But this doesn’t necessarily make for something interesting to explore visually. Christine’s face, to me, is often all telling but also often like a sphinx. It’s very difficult sometimes to get a grasp of who she is. This is intriguing and, I think, is probably what other artists, photographers and filmmakers have also picked up on.

I find Christine’s beauty much more vulnerable and more open to different interpretations than Mandy’s, which in turn offers more scope for exploration. Of course, the Lewis Morley photo of Christine on the chair is such an iconic photo of the sixties – it’s probably one of the most famous images of the 21st century – which has kept Christine constantly in the cultural eye.

You have painted around twenty portraits of Christine. How did this process begin and how has it evolved?

I started painting Christine Keeler in 2014, focusing on black and white expressive paintings and quickly rendered small portraits (a series of four) based on media images from the sixties. As the project Dear Christine started to take shape, I began to explore aspects of the narrative of the Profumo Affair through Christine’s eyes – placing her in context of locations important to the story (e.g. the Flamingo Club, which is where a fight broke out between two of her lovers, which ultimately led to the media revelations of the Profumo Affair) and also imagining how she must have felt as she navigated the fallout of the scandal (in Christine at The Flamingo Club she reads the Denning Report with suspicion and thinly veiled contempt – in Christine and the Poisoned Apple she looks down with hurt as she is handed an apple labelled ‘whore’). 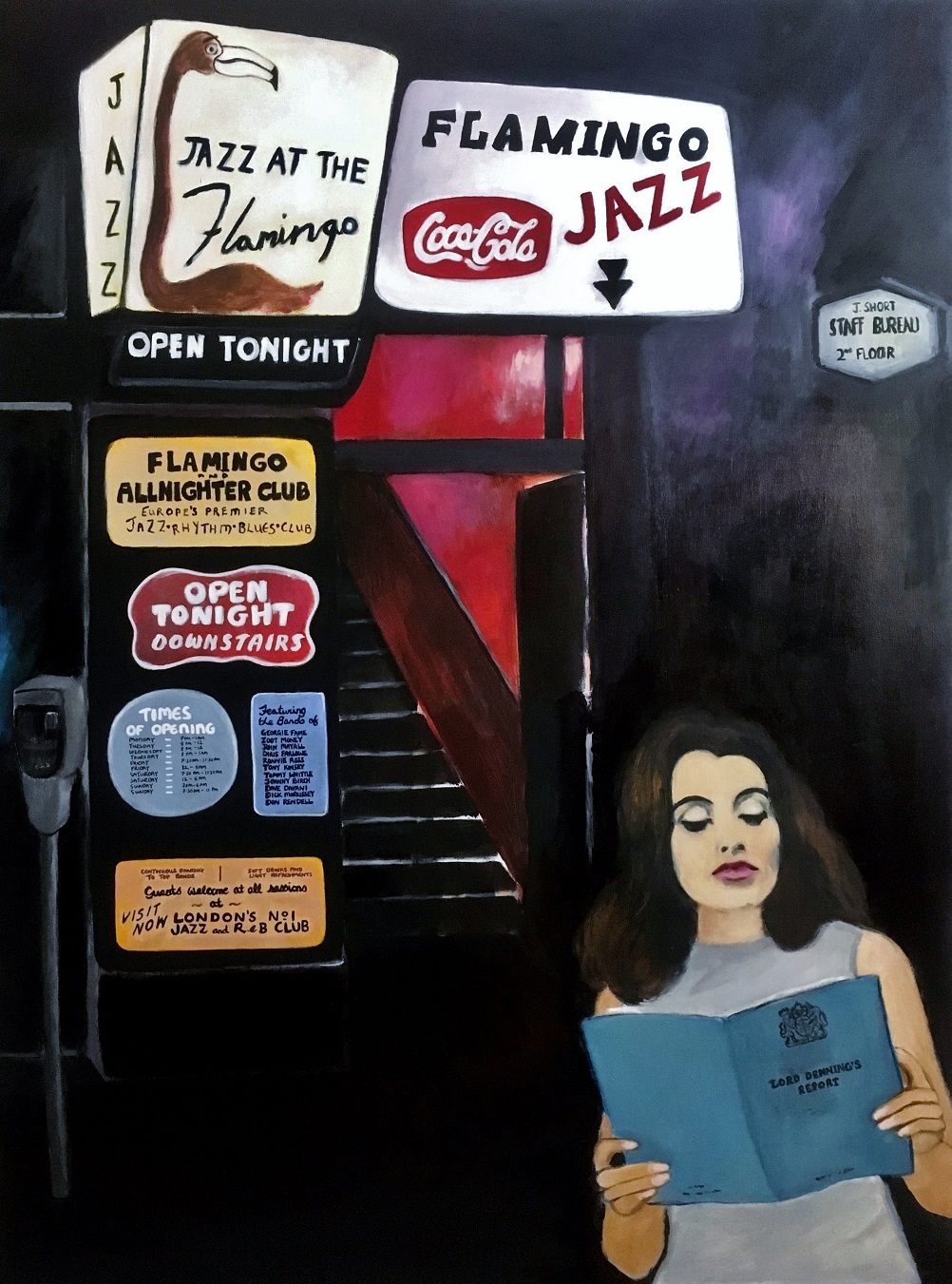 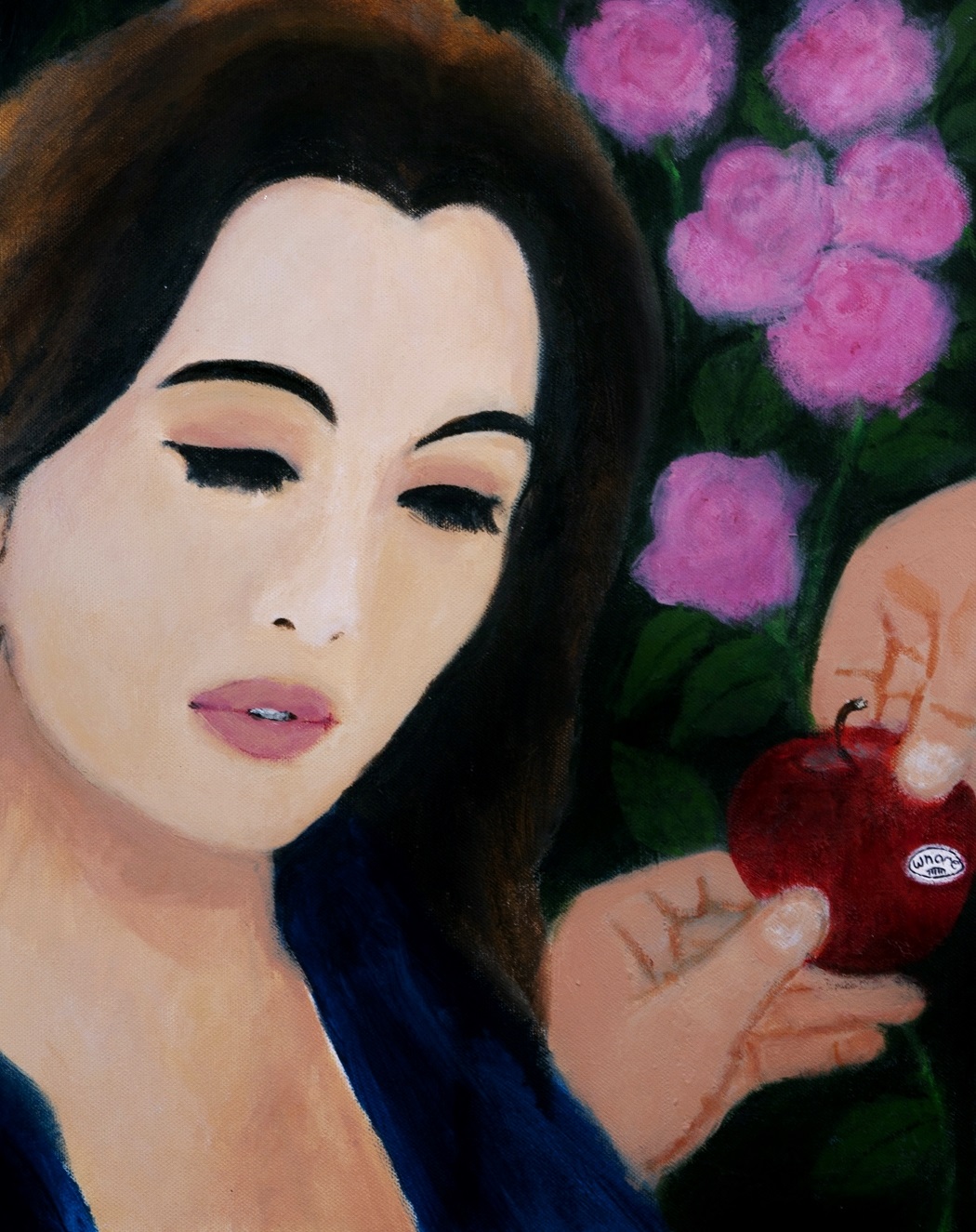 Focusing more on narrative meant my painting became tighter and less expressive – more concerned with composition and also with colour. As the series developed, I became more and more interested in painting Christine in her middle age and older life. One of the portraits of Christine I’m happiest with – Christine Keeler with her Cat – is now part of the Priseman Seabrook Collection of 21st Century British Painting and shows Christine in her council flat in Chelsea in the eighties. It’s based on photos taken by Allen Olley and I think it captures a dignity, but also a vulnerability. In the painting, the cat which Christine strokes on her lap acts almost as an advocate – daring us to make any more judgments of her. 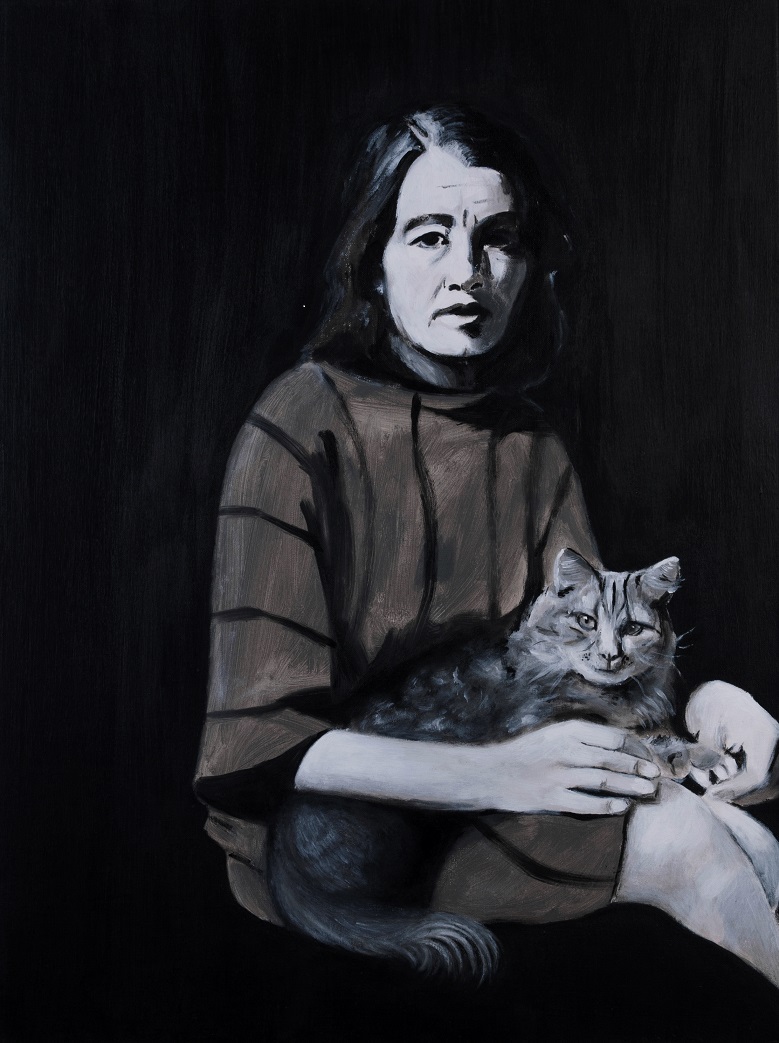 Which materials were most helpful to you in researching Christine’s life and image, and in what ways do you think she has been misrepresented?

I knew it was vital to do as much research as possible into Christine’s life – I wanted to know everything and from as many different angles as possible and through all types of media. I think if you’re going to paint someone who was a real human being you need to do them justice, and for this you need knowledge. Photographic historian and curator Terence Pepper showed me his wonderful Christine Keeler archive at the National Portrait Gallery which was invaluable. I also read Christine’s autobiographies, which were obviously the most helpful in getting a feel of who she was.

There’s a large amount of black and white images online of Christine from the sixties, but ones of her later in life are much harder to find and you have to dig for those. I was astounded to find photos of Christine from the eighties where the captions still refer to her as ‘Mistress of John Profumo’ and ‘prostitute’ and ‘call girl’. This really hit home to me how she had been misrepresented unfairly and how she never managed to escape these labels, even decades later.

There’s a fantastic Channel 4 documentary from 1989, which you can find on YouTube called They Would Say That, Wouldn’t They? which documents the struggle to make a TV series about the Profumo Affair (which was obstructed by, amongst others, the Independent Broadcasting Authority) and the subsequent decision to make a film instead (Scandal, 1989). The documentary highlights how the Establishment was still quaking about the Profumo Affair as far forward as the late eighties. A Wogan interview from the same year, where Christine is subject to the most awful questioning by Sue Lawley, is worth watching to understand just what sort of attitudes Christine was still facing 25 years after the scandal.

Richard Davenport-Hine’s brilliant and award winning An English Affair: Sex, Class and Power in the Age of Profumo (2013) gives a first-class dissection of the time and is probably one of the best books around to read in order to understand the background to the Profumo Affair and the sort of Britain Christine was growing up in. Old newspapers, sourced from eBay and online, have given a clear, and often shocking idea of exactly what Christine was up against in the midst of the scandal (‘Keeler, the shameless slut’, The People, August 4, 1963).

Dear Christine features a variety of women artists working in different media. What can this body of work tell us about women’s attitudes to Christine, and how does her story relate to female experience?

When organising and planning Dear Christine my main priority was to make sure all artists were exploring Christine’s story from different angles but also, vitally, I wanted all artists to explore Christine’s story through their own prisms of interests and, as a commissioning curator, to aim to be non-prescriptive. The exhibition could be said, therefore, to also be of interest in determining what sorts of questions occupy women today.

Themes explored in Dear Christine include attitudes towards the ageing woman and the sexual woman, the power dynamics of sex, political control, power and abuse, class and poverty. To me, personally, it’s also interesting to see how relevant Christine’s story still is and, this may be me being cynical, particularly how very little has changed in terms of attitudes to women being sexual and the power of their sexuality. A sexual woman remains a dangerous woman.

How do the commissioned works in this exhibition – such as the writing from poets in Wales, and embroidery created by women at the former Holloway Prison – complement the other artworks?

I wanted to make sure that, whilst exploring themes surrounding Christine’s life in Dear Christine, we didn’t somehow lose sight of the fact that Christine was a real person living a real life. To me, there’s nothing more personal about us than our own name. And so I commissioned some embroidery from Fine Cell Work (a fantastic organisation which aims ‘to help prisoners to build fulfilling and crime-free lives by training them in high-quality, skilled, creative needlework in order to foster hope, discipline and self-esteem’) with a note explaining Christine’s story and asking the stitcher to repeat Christine’s name in gold thread on gold silk. From a distance the golden silk shimmers and only upon close inspection can Christine’s name be revealed. Again, the commissioned poetry from Wales taps straight into the emotional aspect of the narrative – Christine was, of course, a real human being, not just a set of visual ideas and representations.

Christine Keeler hated being portrayed as a victim. How does Dear Christine counter this narrative, and do you think those perceptions are now changing?

Dear Christine puts Christine Keeler centre stage and shows her as a complex woman sharing similar struggles that women still face three decades later – although for Christine these struggles were ramped up to a much higher degree – she faced the full wrath of the Establishment. I think visitors to the exhibition will perhaps come away with a fuller grasp of what she was up against and, hopefully, will feel sympathy and possibly anger. Christine always maintained she didn’t want to be seen as a victim, but it’s hard to see – within the framework of her background and the difficulties she faced – that she ever really stood a chance. We would all find it hugely difficult to be in Christine’s shoes, facing what she did, I’m sure of that. But I think the exhibition doesn’t take away from the feeling that Christine had her own agency – she was fighting and maintaining dignity and courage to the end.

I think currently there is also a subtle, perceptible change in the language used by the media whilst talking of Christine Keeler and the BBC series The Trial of Christine Keeler certainly helps to humanise Christine and add to understanding. A recent article in the Daily Mail, which has hardly been fair to Christine and had previously printed cruel stories comparing her as a 70-year-old woman with younger images of herself in the sixties, includes the line: ‘Christine was the last woman standing, a raven-haired symbol of a time when beautiful working-class girls like her were dispensable and expendable; popsies viewed and valued only through the prism of their desirability to men’. Writing like this can only be a good sign, as we move onwards.