Narbi Price is a painter. He was the Journal Culture Awards Visual Artist of the Year 2018, and the winner of the Contemporary British Painting Prize 2017.

Narbi Price introduces his new exhibition of paintings, set in Ashington and inspired by the Pitmen Painters. Image above: Untitled Wall Painting (Kwik Fit), acrylic on board, 50x70cm

The idea for the exhibition and series of paintings entitled The Ashington Paintings (held at Woodhorn Museum in summer 2018), came through studying the Pitmen Painters for a PhD research project at Newcastle University, but the paintings aren’t about the Ashington Group, not really. The paintings are the product of many hours spent walking the streets of Ashington, at times in the footsteps of the Ashington Group, through a changed landscape that they would barely recognise physically, but in a socio-political climate that, increasingly, they might. 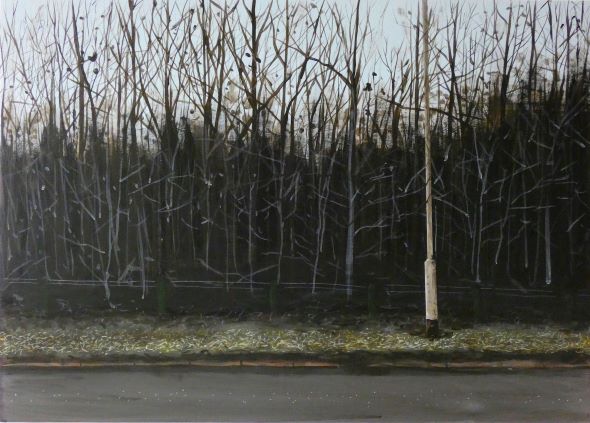 First coming together through their local WEA, the Ashington Group became celebrated during the 1930s and 40s and made work until the early 1980s, they are unique in their tenure and their conceptual rigour among other amateur art groups. Their Permanent Collection housed at Woodhorn is a unique first-hand social document. I became interested in how they actually painted, in what I as a professional artist could learn from their output as amateurs.

There’s very often a novelty factor in writings around the Group: Bill Bryson highlights this in Notes from a Small Island:

The fame of the Ashington Group… rested on a large measure of well meaning but faintly objectionable paternalism. Reading the old accounts of their exhibitions on places like London and Bath, it is hard to escape the conclusion that the Ashington artists were regarded by critics and other asthetes rather like Dr Johnson’s performing dog: the wonder was not that they did it well but that they did it at all.

One of my pet-hates is artwork made from an anthropological viewpoint, putting areas, communities, groups under an observational lens, and placing them in the position of the other, for the consumptions of a different group of people. If I was to make work about Ashington now, I had to be part of it myself, but in a quiet way. 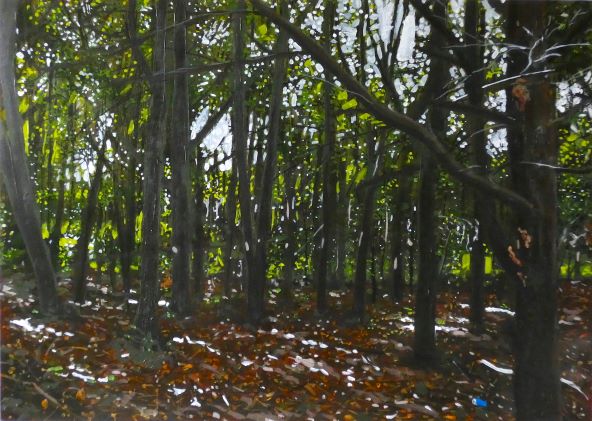 Untitled Trees Painting (QEII – for Craig), acrylic on board, 50x70cm

A key visual difference between my work, congruent with the wider continuum of my practice, and that of the Ashington Group is the issue of human presence. My work never explicitly features depictions of people, only the traces left behind by their presence. This device could be seen as a metaphorical comment on the Ashington Group itself, the industry of the area, the original function of the towns and villages depicted – all now gone. 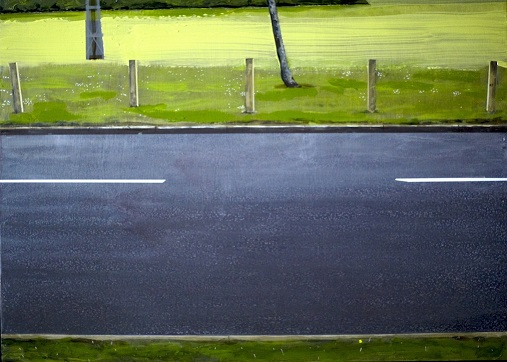 The paintings depict sites rich with histories, some of them evident within the palimpsest of marks, but much of them hidden by redevelopment, repurposing, redaction. Among the places depicted in the paintings are the sites of the five collieries operated by the Ashington Coal Company: Ashington, Woodhorn, Linton, Ellington and Lynemouth. There’s an oddness in standing on a clean, perfect road in a business park, armed with the knowledge that you’re in the middle of a vast colliery, or in watching swans glide over a lake knowing that you’re on the site of the one-time biggest slag heap in Europe. These new paintings are as much, if not more, about the ghosts of Ashington as they are about the town today. 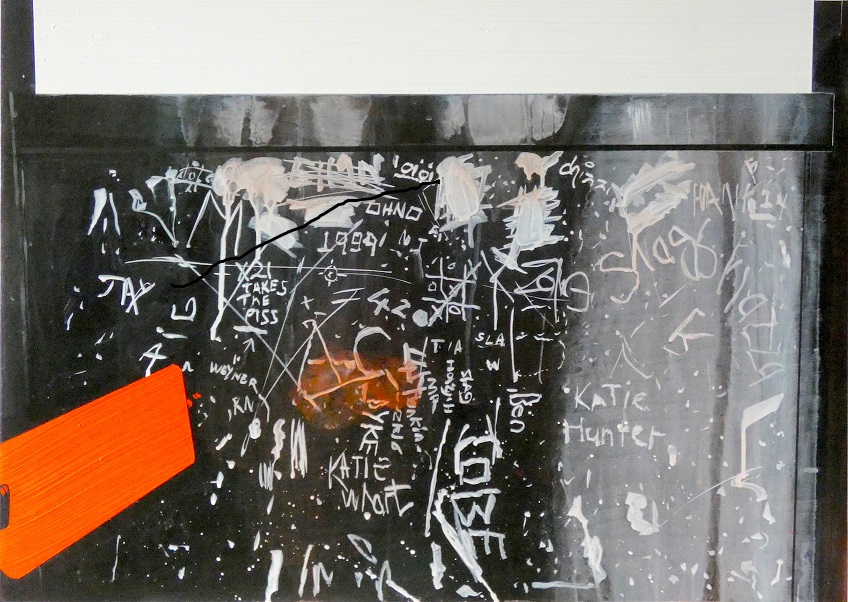 Untitled Bus Stop Painting (The Hole), acrylic on board, 50x70cm

Ashington is a town founded on mining – whilst a small number of homesteads existed there previously, it came into being proper when housing was built for mine workers in the 1840s. The end of the mining industry some 140 years later in the 1980s, left Ashington a town divorced from the very reason it exists, and the associated unemployment and social ills resulted in a rapid decline, which continues to the present. This landscape looms large in the work of the Ashington Group, providing the backdrop to the scenes depicted. The changed topography and shifted function since the end of industry in the area, provided a rich and varied subject for my new work, made in response to theirs. 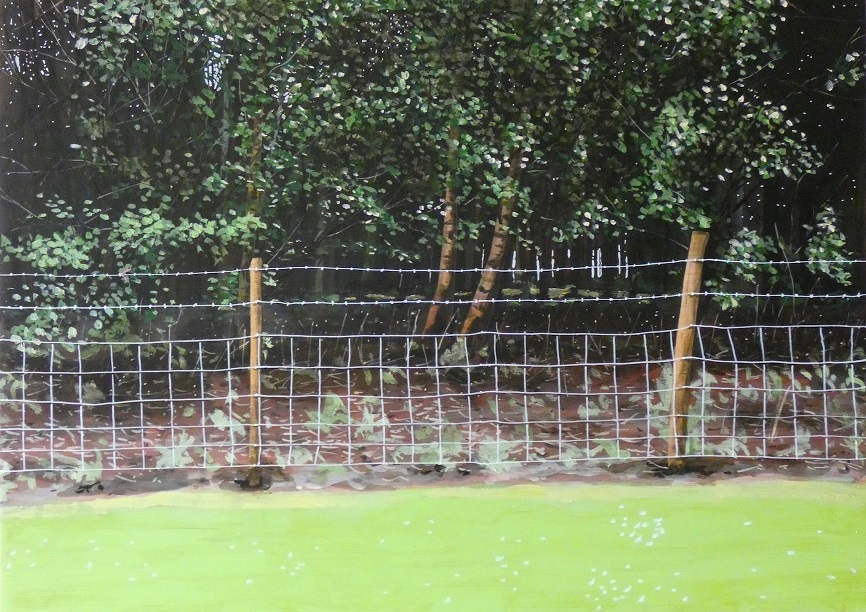 I started walking Ashington in 2015 before the Brexit vote and the biggest political shifts in this country since the pits were closed. Northumberland voted to leave by a slightly higher margin than the national average, despite around 1200 jobs relying on EU funding, and the area receiving an estimated £108m in EU funding in the decade prior to the vote. The beginning and end of the Ashington Group coincided with the depression of the 1930s and the recession of the 1980s, and many of the members lived to see the industry that they had documented, and the very reason for Ashington’s existence, taken away, making their decades long documentation of their working and home lives, all the more poignant. 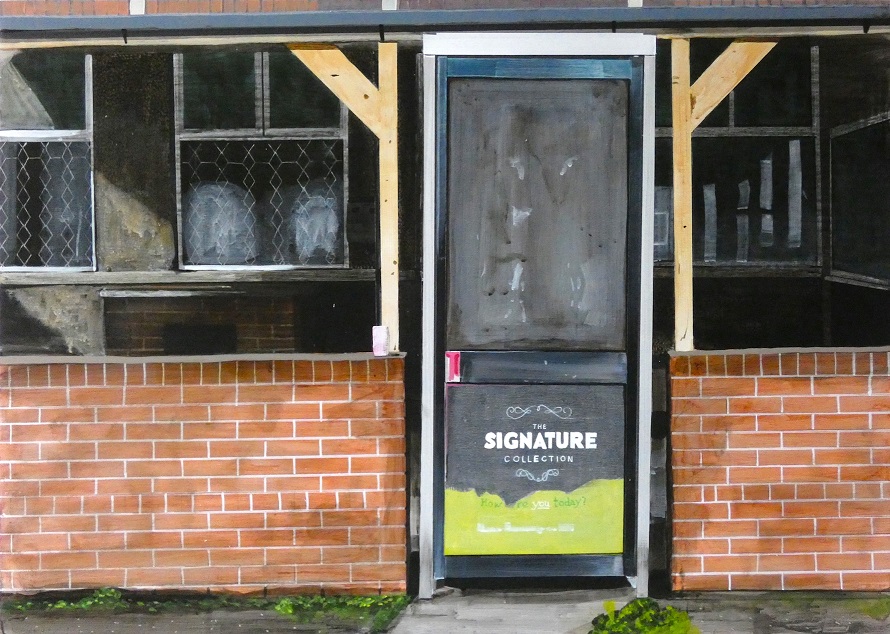 The last pit closed over thirty years ago, and Ashington is in flux. It is no longer the Biggest Mining Village in the world. No longer any mining, no longer a village. There’s literally a hole in the centre of the town. The place names as in other towns, give clues to their own histories; Portland Park, Station Road, Milburn Road. They aim for an optimism, with streets named after English trees and Shakespearean heroines. They seek permanence but other names betray them with their itchy feet. They’re transitory, looking for the next place, to find their own end; Woodhorn Road, Newbiggin Road, North Seaton Road. 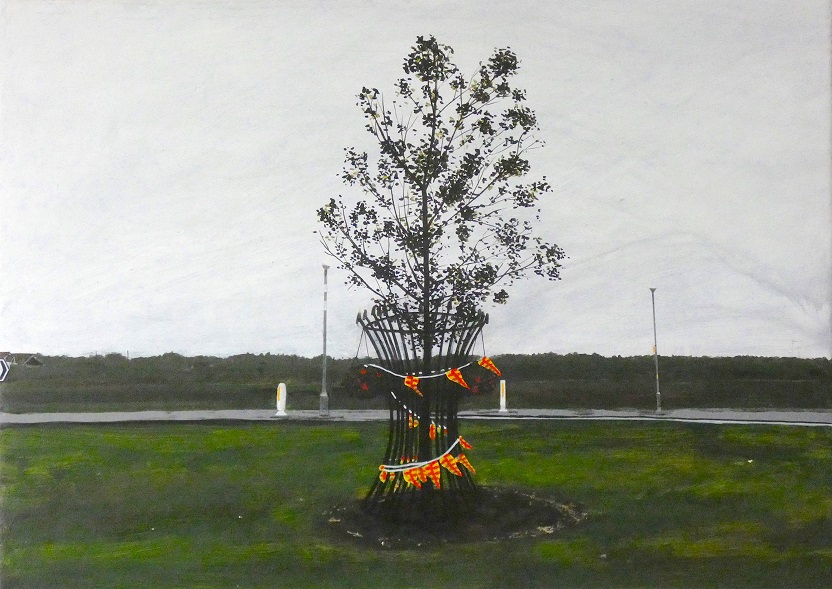 The afternoon sun is always low and shining into your eyes in Ashington regardless of which direction you’re facing, ‘contre-jour’ a friend from Chestnut Street told me. Perhaps there are bright things ahead; we just can’t quite see them yet.