Jenny Farrell writes about Albrecht Dürer, who made art in supported of the democratic movements of his time

Albrecht Dürer was born 550 years ago, on 21 May 1471, during the Renaissance, a time of upheaval that rang in the early modern age. With improved production methods, industry and trade grew rapidly, bringing with it more money and the strengthening of a new middle class. Modern science developed, age-old truths were called into doubt, and working people began to challenge their appointed places in the social, political and religious hierarchies. It was a time, among other things, when many peasants protested, arose and demanded to be treated as equals.

The Reformation in Germany was an expression of these social changes in the early 16th century. The rising bourgeoisie in the countries north of the Alps, especially Germany, felt the need to break with the papacy. The opposition forces did not yet possess the economic and political power that would have enabled them to subjugate the papacy to their own interests, as in Italy. The Reformation movement began with Wyclif in England, continued with Hus in Bohemia and culminated in Germany. Popular social opposition became part of it. Social forces in religious guise fought the Hussite wars in Bohemia.

In Germany, a differentiation within the forces that had initiated the Reformation soon became apparent. When the upper middle-class patricians realised that the Reformation meant a complete break from Rome, and that there were elements within this movement that aspired beyond bourgeois class society, they returned to the bosom of the papacy.

As Engels describes in “The Peasant War in Germany”, Luther became afraid when he realised the socially explosive effect his challenge to Rome’s hierarchy had on the peasants, who understood this to legitimise aspirations to change their own lot. So his theological reforms did not question class divisions.

Thomas Müntzer became the leader of the popular opposition. He led the Peasant War, which challenged the old social order, while Luther along with the bourgeoisie turned against the revolutionary peasants, preventing the unification of all oppositional forces, thereby setting back major social change by centuries. The peasants and their urban plebeian allies were defeated and Müntzer was imprisoned and beheaded.

The influence of the working classes on German art of the Reformation period is frequently underestimated. It survives in numerous pamphlet woodcuts from the early 16th century, but above all in many prints by Dürer and his circle. Dürer's influence can be seen in the work of Grünewald, Riemenschneider, Jörg Ratgeb and many other artists, and infuses German art of the Reformation period with a haunting popular appeal.

Albrecht Dürer’s genius so dominated the art of the early bourgeois revolution in Germany that it has been called the Dürer epoch. He was born in Nuremberg as the son of a goldsmith, studied for three years in the workshop of Michael Wolgemut, spent four journeyman years in Basel, Strasbourg and other places, and finally settled in Nuremberg. Twice he crossed the Alps to Italy, first in 1495, the second time in 1505/06, each time spending an extended period in Venice. A third journey took him to see the Netherlands in 1520/21, where he made many important acquaintances. 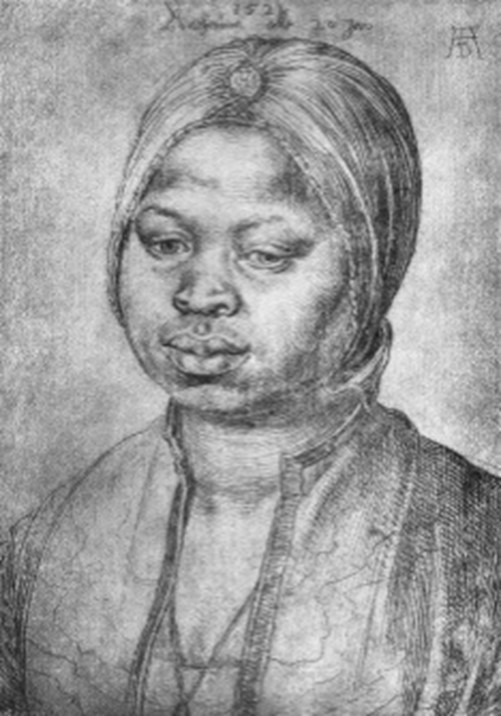 This remarkable portrait, created during the journey to the Netherlands, is based on an actual encounter and not Dürer's imagination. The drawing shows the artist's great interest in people who came to Europe because of growing international trade, which of course included the slave trade. The woman depicted here is Catherine, a 20-year-old servant of the Portuguese commercial agent João Brandão, who administered the Portuguese spice monopoly in Antwerp. Dürer was his guest when he travelled to Antwerp in 1521. It is likely that Brandão acquired this African woman through his trade connections. Her name suggests that she had converted to Christianity.

Dürer's obvious interest here is in the individual person. His deep humanism infuses her portrait with the same dignity he affords the peasants he depicts. Dürer was the first German artist to capture the peasants’ self-confidence that had been stirring since the late 15th century. He was the first to portray peasants as aesthetic subjects. Through Dürer, depictions of peasants appear in the revolutionary pamphlets of the time. 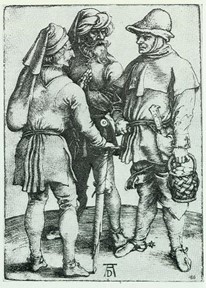 This wonderful copper engraving shows three armed peasants in serious conversation. They are clearly intelligent and dignified people. One of these rebellious peasants carries a rapier, another has a knife in his pocket and spurs on his shoes. The third figure reaches into his waistcoat, from which he might produce a leaflet.

In 1525, in the third book of his “Unterweisung der Messung” (Instruction in Measurement), as a model for the proportioning of a monument, he included a woodcut that championed the cause of the peasants. 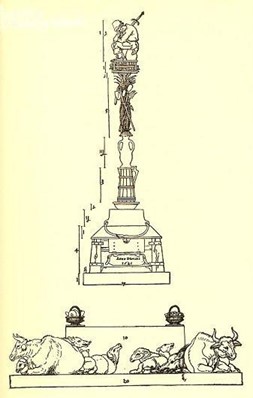 The column shows livestock, household and agricultural equipment from a peasant holding, now the booty of the conquerors. Instead of the victorious conqueror crowning the pillar, there is a peasant, pierced by a sword. We see him in the posture of Christ at rest, the slain peasant as the true follower of Christ. The Peasant War was just over, and siding with the revolutionary peasants was far from safe.

Many artists suffered persecution. Matthias Grünewald took part in seditious acts, had to flee from Aschaffenburg to Frankfurt, and died as a persecuted person in Halle. Jörg Ratgeb’s main work, the Herrenberg Altar painted in 1518/19, is inspired by a passionate and rebellious spirit. In it, he portrays the representatives of the church as fat, arrogant executioners. Ratgeb joined the peasants and became a military advisor. Following the defeat of the peasant army, he was publicly quartered in the marketplace of Pforzheim in 1526.

Tilman Riemenschneider was a leading sculptor of the late Gothic period. In 1525 he was 60 years old, a respected citizen of Würzburg and a member of the council, and was arrested, expelled from the council, and tortured. He ceased all artistic activity after this. In the last years of his life, Dürer turned away from art to more scientific preoccupations and died at the age of 57 on 6 April 1528. He remained close to the common people in his thoughts and actions. He sided with the democratic movement and fought for it with the weapons of his art.

The greatest artists of that time in Germany stood with the people.