Jenny Farrell marks the 350th anniversary of the death of Rembrandt van Rijn with a discussion of some of his dynamic, democratic and deeply humane paintings

In the 13th and 14th centuries, the Flemish cloth trade had developed into the strongest competitor of Florentine cloth makers and traders, giving rise to a growing Dutch bourgeoisie. Early capitalism developed quickly in Flanders and Brabant, with the trading centre of Antwerp, while the provinces in the French-speaking area remained agricultural and mainly dominions of the nobility.

The conflict between bourgeoisie and aristocracy became an expression of national interests, reflected in the struggle against Spanish domination. The bourgeoisie was the leading force in the national liberation struggle of the Dutch people.

Only the northern provinces of the Netherlands succeeded in 1648 in freeing themselves from Spanish rule, giving power to the bourgeoisie. Awakened national pride, love for the homeland as well as pride in bourgeois prosperity were all expressed in painting. Dutch artists painted everyday life and ordinary people at work. They raised genre painting to the level of great art, and for the first time in history, ordinary people were painted in all their diversity. Dutch art was the first to develop secular genre painting.

Cheerful aspects of life dominated the arts. The peasant world was included, however, mainly for amusement. Soldiers and beggars completed the range of subjects. The only painter who expressed a warm humanity for beggars was Rembrandt. His genius was unrecognised in patrician Holland, yet only Holland could produce such an artist. Only the Republic that had a plebeian history linked to the struggle for independence could be his historical ground.

The young Rembrandt’s paintings are full of joyful energy, as his Self-portrait with Saskia (1635) shows. Towards the end of the 1620s, his art had grown – in warm, gold tinted coloration, and in its ability to dramatise space through light-dark contrasts. 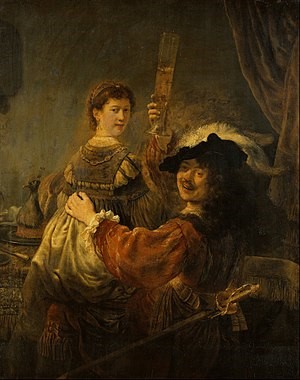 The Night Watch (1642) represents a new departure. Group portraits had become a special achievement of Dutch art and expressed proud community spirit. People wanted to see the members of a guild or a corporation represented together. The civic militia, organised in militia guilds, played an important role in the wars of independence, making such paintings artistic expressions of the bourgeois revolution. Rembrandt broke with the traditional style of a fairly stiff group portrait, by subjecting all participants to dynamic action and a dominant light-dark contrast.

Instead of an impressive company of admirable officers and disciplined men, Rembrandt paints a rather disordered assembly. Each guard seems to be looking and pulling in a different direction, doing his own thing impervious to the others. Lance and flag point in opposite directions. In the midst of it, a diminutive golden figure, with Rembrandt’s recently deceased wife Saskia’s features, holds the company’s emblems.

In this way, Rembrandt subverts what had been a heroic genre. There is liveliness, sound and motion, with a man loading his musket, the commander giving orders, a drummer drumming, a flag swung, a barking dog and the boy – carrying a powder horn and dashing off to collect more powder for the three musketeers – all adding to the commotion. Two areas of bright gold on either side of the captain focus the eye on him, as do the diagonal lines of the flag, rifle, and lance, all pointing towards him. Nevertheless, the captain and his lieutenant in the centre foreground do not impose order. This animated, energetic movement was so new that it must have perplexed both guild and viewers. It is so powerfully forward-moving that the viewer feels a need to get out of the way. It is a truly revolutionary painting.

Later, Rembrandt develops a lyrical intimacy that infuses family scenes with a humanity that constitutes Rembrandt’s timeless significance. The moving painting Jacob Blessing the Sons of Joseph (1656) uncovers depths of the human psyche, and finds its greatness in love and forgiveness. Colour and light interweave, creating an inner glow. Rembrandt focuses on the gentleness and warmth of Jacob’s blessing, not showing the disagreement between Joseph and Jacob regarding this blessing. Also, the inclusion of the children’s mother, Asenath, in this scene, is a deliberate departure from the Bible, and reflects the growing status of women in 17th century Holland as well as the importance of love in marriage. Asenath is shown to be involved and an important figure in the family setting. Her presence illustrates Rembrandt’s realism and the ingredient of doubt that he brings to his art. The painting’s colours underline the warmth and tenderness of the scene, and the perspective from which it is painted heightens the sense of the viewer surreptitiously witnessing a momentous family moment.

Jacob Blessing the Sons of Joseph, 1656

In the course of Rembrandt’s lifetime, the bourgeoisie had aligned their standard of living with that of the nobility. They became mainly interested in the outwardly beautiful and representative. Rembrandt’s incorruptible artistic honesty, shaped by the democratic spirit of republican Holland, inevitably came into conflict with the ruling class. From the middle of his life, his work was no longer valued.

Rembrandt anticipated a democratic culture that was yet to come. He was the first to place modern knowledge, understanding – and therefore doubt – at the centre of his art. This places him among the ranks of the great Enlightenment artists and thinkers, and connects him with the ideas of the French Revolution.

All but forgotten in old age, he died in poverty and alone, on 4 October 1669.