The Rising in Merthyr Tydfil in June 1831, led by ironstone miners and puddlers under a flag bathed in calves' blood, was a notable event in the history of the town. It was a rebellion against the repressive and exploitative policies of the ironmasters in which 24 men, women and children were killed, and some soldiers were injured. 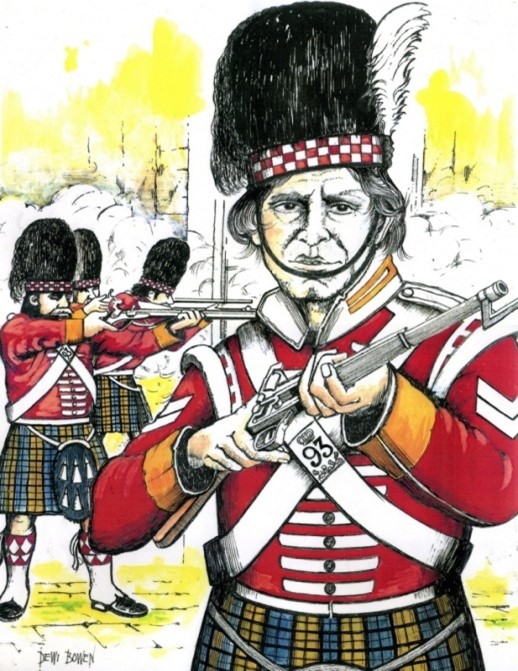 Soldiers of the 93 Regiment Argyll and Sutherland Highlanders

A court case followed and two men were singled out, Richard Lewis (Dic Penderyn)  and his cousin  Lewis Lewis (Liwsyn yr Heliwr or Lewis the huntsman), who were condemned to death. The sentence of Lewis Lewis was later commuted to transportation for life. A petition on behalf of Dic Penderyn was signed by 11,000 people and representations made by the Quaker Joseph Tregelles Price before the Home Secretary Lord Melbourne proved to be of no avail and the verdict was upheld. 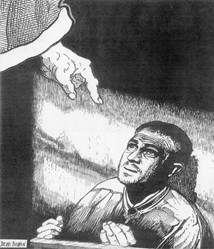 A native of the Aberafan district, the son of a Lewis Lewis, Richard lived in Pyle and later worked as a haulier in Penderyn, which may  be the origin of  his legendary name Dic Penderyn. Little is known about his history until his life except that he was a miner and a married man, aged 23 in Ynysgau in Merthyr Tydfil during the Rising of 1831. He was present during the scuffle when several soldiers were injured on the 2 June 1831, although little evidence is available on his actual role in the action. Dic Penderyn was arrested and charged with 'riotous assembling at Merthyr Tydfil' and wounding Private Donald Black, a soldier of the 93rd Regiment of the Argyll and Sutherland Highlanders. He was hanged at Cardiff goal on 13th August; his final words were "O Arglwydd, dyma gamwedd" (Oh Lord, this is an injustice).

It was later established that Dic Penderyn was innocent of the charge when in 1874, Rev. Evans Evans, a Congregational minister, said that a man called Ianto Parker had made a deathbed confession admitting that he had stabbed the soldier and fled to America to avoid capture. James Abbott, a local hairdresser, also admitted that he had lied under oath in his testimony against Dic Penderyn, claiming he had been instructed to do so by Lord Melbourne. Dic Penderyn became known as a martyr and working-class hero. 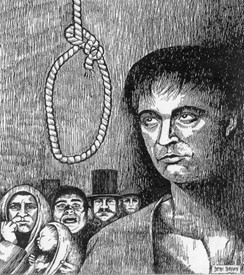 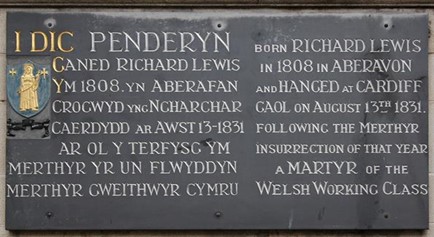 Dic Penderyn was buried at St Mary's Churchyard in Port Talbot and a memorial was placed there by local trade unionists in 1966. A plaque to his memory can be found at the entrance to Cardiff market on St Mary's street, the place of his execution. In 1977 a memorial plaque was unveiled outside Merthyr Tydfil Central Library by Len Murray, General Secretary of the TUC. 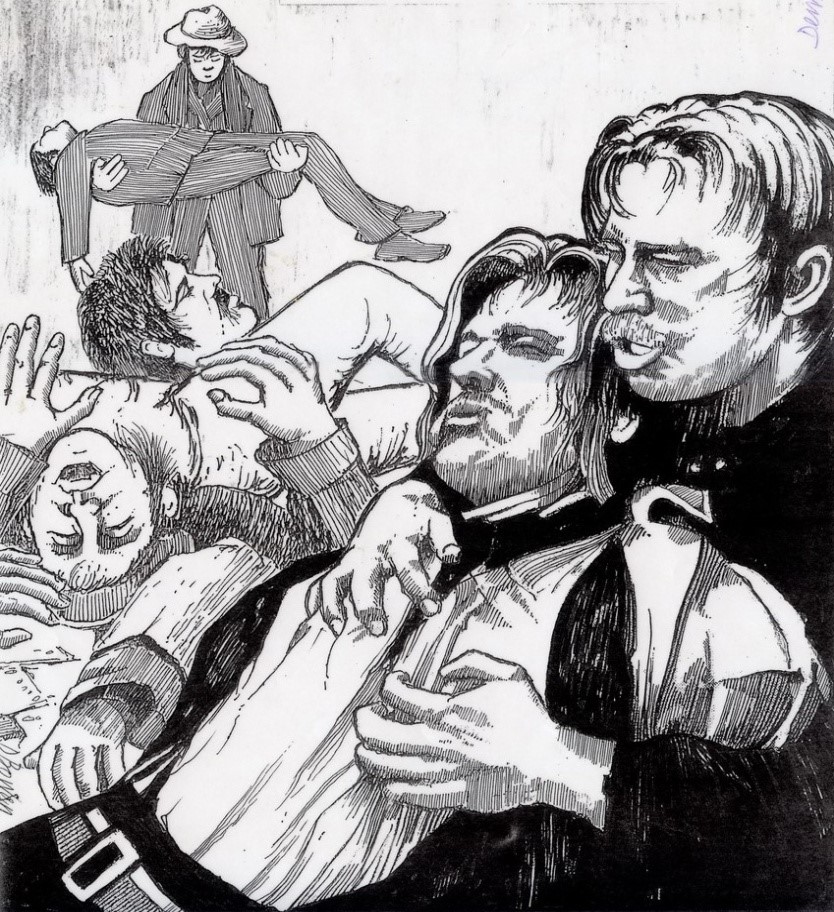 Lewis Lewis was the leading personality and folk hero of the Merthyr Rising, according to historian Gwyn Alf Williams. Born in Blaen Cadlan in Cwm Cadlan, the son of Lewis Jenkin Lewis, a butcher and horse runner, he worked as an haulier carting coal from mines in Llwydcoed to limekilns in Penderyn. Described as a charismatic, respected, fair and honourable man in his community, he was identified by the ironmasters as a leader in the Rising and his oratory skills in Welsh and English inspired the protesters into action. He was one of the leaders of the attack on the house of Joseph Coffin, Clerk to the Court of Requests, and in inciting the crowd to seize the arms of the soldiers outside the Castle Hotel.

Following some initial success and faced by  the superior power of the military, the insurrection failed and men fled, including Lewis Lewis, first escaping to Penderyn before he was eventually captured hiding in the woods of Hendrebolon in Ystradgynlais. Convicted of the charges of  'Riotous Assembly' and destroying the house of Joseph Cotton, he and Richard Lewis were condemned to death. The conviction against Lewis Lewis was later commuted to transportation and he sailed for New South Wales on 26 January 1832.

The evidence given by Lewis Lewis at his trial was heard in secret and it has been assumed he turned 'King's Evidence'. It is also claimed his reprieve may have been attributed to the influence of local gentry, particularly that of his squire Morgan Morgan of Penderyn, because of  their association with horses. 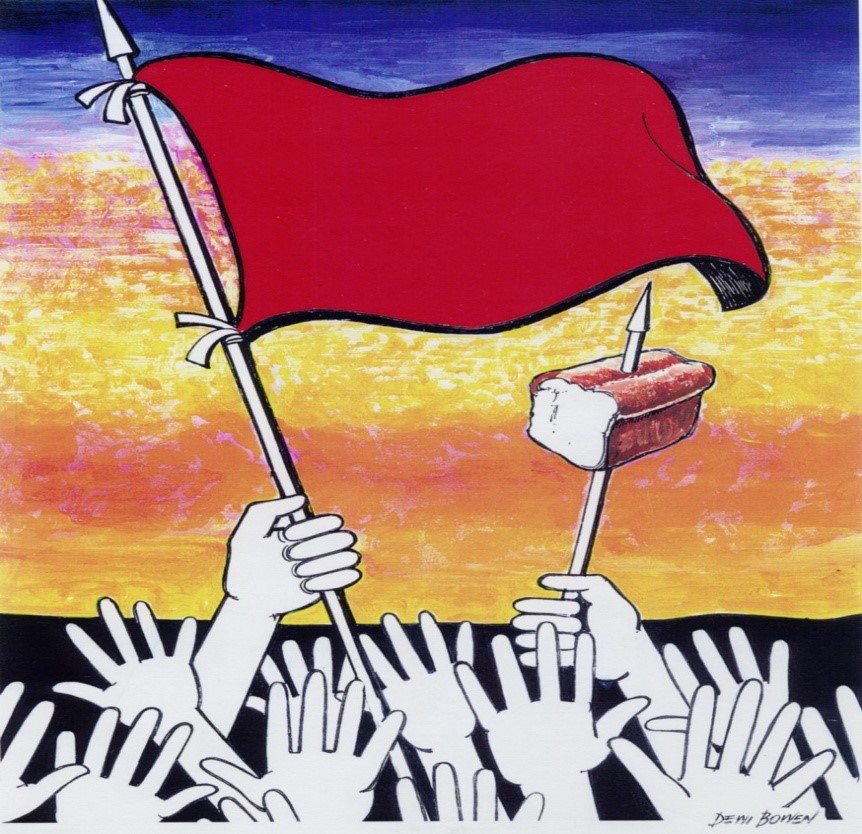 Bara neu Waed - Bread or Blood, the cry of the Rising

The town was Merthyr Tydfil,
The year was 'thirty-one,
'Twas there in grim Glamorgan
That mighty deeds were done.
The alien lords of iron
Who ground our people down,
Took refuge in their mansions
And the workers took the town.
Upon the hill of Dowlais
We raised a flag of red,
We burned the cruel courthouse
And we gave our people bread.
The cavalry we ambushed,
The yeomanry they ran,
The lancers they retreated
When we met them man to man.
But soldiers kept on coming,
We met them face to face
Unarmed outside the Castle Inn,
The masters' meeting place.
And at the masters' harsh command
They fired on the crowd,
And all the gutters ran with blood.
Why are such things allowed?
They hanged young Dic Penderyn
Outside of Cardiff town
And as he trod the scaffold
Heaven sent its lightnings down.
And Lewis the bold Huntsman
Was banished from the land
And all the workers had to bow
To the masters' iron hand.
But still we hold in honour
The men who struck and bled
For freedom and for justice
And to give our people bread.
And the time is surely coming
When Wales must more show
The courage of Penderyn
So many years ago.

The Merthyr Rising was written by Harri Webb in 1974. It is an inspiring poem dedicated to the brave ironworkers and coal miners, who rebelled against the dreadful conditions of starvation and exploitation they were subjected to by the ironmasters. Harri Webb gave a lecture, 'Dic Penderyn and the Merthyr Rising of 1831', which was published in 1956.

Malcolm Llywelyn is a published writer and historian, see llyfraubrynach.cymru