May ’68: a structuralist riposte

A cloud no bigger than a man’s hand crosses the English Channel from Paris, and then, in an instant, the trees, the orchard, the hedgerows, the field of wheat, are black with locusts. When at length they rise to fly on to the next parish, the boughs are bared of all culture, the fields have been stripped of every green blade of human aspiration; and in those skeletal forms and that blackened landscape, theoretical practice announces its ‘discovery’: the mode of production. - E.P. Thompson

‘Structures don’t take to the streets!’ - graffito on wall of the Sorbonne, May 1968

OK, point taken: it's not 'on the street'
You'd find them, all those 'structures' that we went
On endlessly about till soixante-huit
When we skulked in our academic tent
(Or so the story goes). We'd failed to meet
Our one great chance and challenge heaven-sent
To end the left's two-centuries-long defeat
By making good the two decades we'd spent
On theory-talk. 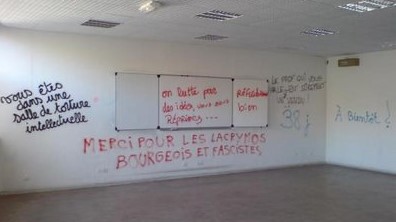 Small wonder should they greet
Us lot, those militants, with slogans lent
An added force by dint of our elite
Normalien credentials, native bent
For high-flown chat, and tendency to treat
The world as theory's oyster. We'd frequent
Only those streets (they said) where a discreet
Escape-route helped us twisters circumvent
Our own past calls to action. Then some neat
Debating-trick did service to augment
Our cultural capital, and take the heat
Off any failings that we might repent
Were they not wiped clean from our record-sheet
By the fine structuralist expedient
Of counting subjectivity a cheat
That's foisted on us when we represent
Ourselves as 'free'.

Thus all our thoughts repeat
The lie that has us willingly assent
To ideology's absurd conceit
Whereby the hoodwinked subject rests content
With a fake ‘freedom’ that would have him beat
Its own unyielding bounds. How orient
Ourselves to action if the driver's seat
Of willed intent contains a subject pent
By structures that perpetually secrete
The solvent of each self-constituent.

That's the idea: that all those Althusser-
Primed theorists could do, faced with the May
Événements, was to disown all share
Of agency, urge strikers to delay
That premature revolt, and so declare
The present conjoncture not one that they
Could possibly endorse. Then they'd compare
The current prospects with the grisly way
Things go whenever passions start to flare
And, as so many times before, betray
The white-hot zealots to the black despair
That comes of hopes and dreams long kept at bay
By the same powers that soon must conquer their
Ill-timed charade. 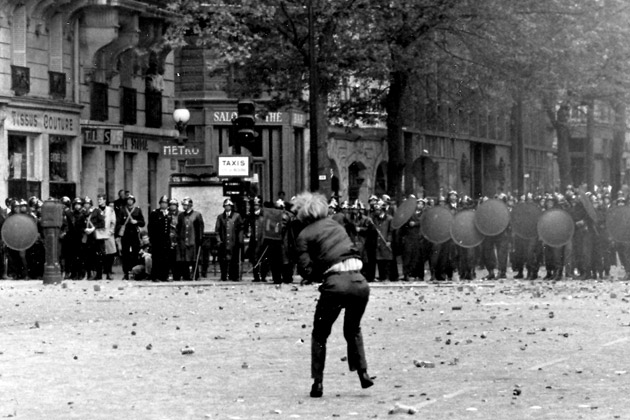 Yet I'd still say,
All these years on, that you'd best spare
Us street-averse soixante-huitards your pay-
Back accusations of our taking care
To hide ourselves behind a great array
Of abstract propositions framed to bear
Whatever weight of evidence might fray
Our threadbare theory-hope. It's you who err
Most grievously if you take that cliché,
'No structures on the streets', as if to square
Accounts with real-world history and play
The role of less-deceived. Who more aware
Than us how world-events will often stray
Far wide of anything that the armchair
Philosopher might dream hors de mêlée
Since structures don't emerge out of thin air
But just when subjects meet the come-what-may.

Quick recap for the faint of heart or weak
Of memory: 'structure' signified the site
Of struggle, contestation, and critique
Where subjects found a leverage-point despite
Appearances. It seemed to show a bleak
Since language-based determinism quite
Devoid of all idea that we might speak,
Act, criticise, and thus relieve our plight
As drifters up the croc-infested creek
Of any ideology that might
Recruit compliant minds. 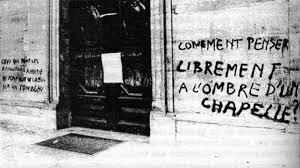 That's how the clique
Of New-Right, mostly ex-left types indict
Us true soixante-huitards, we who still seek
A way to get the basic issue right,
The one that comes to us from Ancient Greek
Philosophy and yet remains the blight
Of system-builders as of those who'd sneak
Free-will back into some (it seems) airtight
Construction through a small but handy leak
Of subjectivity. No inner light
For us old structuralists, no high mystique,
Like Sartre's, of a freedom shining bright
With existential promise through that freak
Of nature, human choice. Hail the White Knight
Who comes (though often by the most oblique
Or complex ways around) to wing our flight
From the iron grip of causal laws that wreak
Destruction on our human will to slight
Mere circumstance and end the losing streak
We suffered as if fate had fixed the fight.

My point: that structuralism helped us see
Beyond that Sartrean fix by letting go,
Once and for all, the thought of subjects 'free'
In the sense 'really, deep down, prone to no
Impediments of kind or of degree
To their free choice: 'defend the status quo
Or strive against it!'
That's the reason we
Took language as our model, or – you know
The story well enough – the master-key
Of structural linguistics. This we owe
To Saussure, Jakobson and company,
Plus Althusser who managed to bestow
On Marx a reading that could claim to be
Both rigorous and well equipped to show
Our own conjuncture with the clarity
Such thinking brings. The syntagmatic flow
Of speech is like the combinatory
Of actions and events, an ordered row
That bears the mark of willing agency,
Whether to hold in place or overthrow
Such order. Yet it shows unconsciously –
So structuralists maintain – the sous-niveau
Of differences and contrasts that decree
How speech or actions signify although
The speaker, like the agent, won't agree
That what they've said or done makes sense on so
Arcane a set of terms.
Think: why should she,
The militant, however street-wise, grow
Conversant with depth-codes of strategy,
Or speaker venture nothing till, below

The surface utterance, he too can trace
The signifying systems that elude
Our conscious grasp? For else they’d slow the pace
Of speech, or thought, or action, and preclude
All access to the generative space
Where subjects somehow find the aptitude
For words and acts that promise to displace
The ideologies that once subdued
All stirrings of revolt. So we gave chase
To errant signifiers, or pursued
Those fleeting signs – exposed to us by grace
Of Marx and Freud, plus insights late accrued
From Althusser and Lacan – that the case
Is not at all as it's naively viewed
By those who take our words and deeds at face
Acceptance but, more tellingly construed,
Half-yields to ideology's embrace
Yet kicks against it.

Hence the multitude
Of symptoms that would promptly self-erase
At its behest if not for us, the brood
Of old-school structuralists who opt to base
Our strategies and methods on a clued-
Up symptom-reader's grasp. This shuns the race
From thought to deed, reminds us what ensued
In ‘68, and bids we play our ace
Card to warn just how easily a mood
Of premature euphoria takes the place
That, we say, falls more aptly to a shrewd
Since theory-guided project to retrace
The structural constraints that had us screwed.