In early April 1968, after the assassination of Martin Luther King Jnr, a panoramic rebellion, fuelled by the rage and grief of black communities grown increasingly forthright in their own self-defence, rocked America’s political establishment to its foundations, and left a trail of smoking cities in its wake. “White America killed Dr. King last night”, Stokely Carmichael declared on April 5th, offering a social diagnosis apparently shared by the sudden masses of disaffected protestors, storming the local bastions of power and wealth, from New York to Cincinnati to Louisville. 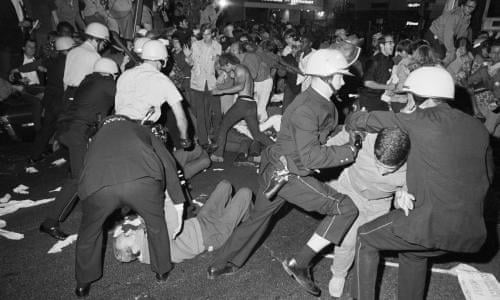 The previous summer, over 150 riots (against police brutality, black unemployment, and systemic housing discrimination) had likewise broken out across the country, filling TV screens and radio channels with panicked reports of a nation accused, and now challenged, by citizens unwilling any longer to accommodate the structures of violence used to keep them down. During those “long hot” months, from July onwards, the initial photography and production for George A. Romero’s first feature-length film took place. A lean, grimly satirical vision of a society in freefall, Night of the Living Dead was released in cinemas the following year, six months after King’s murder, on October 1, 1968. It redefined the horror genre (there would be a near-endless stream of cinematic riffs and sequels), and projected a garish iteration of the American nightmare, torn apart by apocalyptic fears and hungers.

The film begins, in eerie monochrome, with a lingering shot of a winding road, over which a distant car speeds, coming closer, eventually reaching a cemetery, where star-spangled flags twitch and riffle in the wind. It’s an ominous opening, comparable in atmosphere to Grant Wood’s haunted hurtle of a painting, “Death on Ridge Road”, while the setting and visual arrangement evoke the social realist photography of the 1930s, with a Gothic (or perhaps Hitchcockian) twist. Even before the “living dead” appear, we sense, from the outset, that this is a weird kind of anywhere, mundane and menacing.

The first characters we encounter, Johnny (Russell Streiner) and Barbra (Judith O'Dea), are well dressed and meticulously (almost spoofily) bland. “We still remember”, Johnny intones, reading from the wreath and cross he’s come to lay on his father’s grave, as he does every year, out of reluctant habit. “Well I don't [remember]!”, he quickly chirps, with a faux indignation that offends his sister. He can’t recall his father and doesn’t understand why they’ve come all this way to visit his grave. Romero has fixed his lens on a world in which the blithe amnesia of middle-Americans precedes lurid and rapidly expanding catastrophe.

Johnny, with his combed-over hair and the suit that drapes him like a loose-fitting skin, is promptly done away with by a lurch-limbed corpse, resurrected in tattered business wear, desperate for flesh to devour. From this point onwards, the film’s pace is hectic and compulsive, its intense dramatization of characters in crisis sustained in pulse-quickening close quarters. A high-strung score, large and supple, buoys and propels Barbra’s barefoot escape to an abandoned farmhouse nearby, where the rest of the action occurs, as a disparate band of fugitives likewise takes shelter within its walls, while outside the ghoulish cadavers start to circle.

When Ben (Duane Jones), athletic and intelligent, arrives on the scene, with his apparently innate assurance and pragmatism – “I’ll see if I can find some food” – Barbra seems as initially wary of him as she is traumatised by the sight of the ravenous corpses looming in the yard. “What’s happening?”, she moans, with an anger in her voice that soon dissolves to catatonic blankness. Undeterred, Jones’s character steps out-of-doors, with a calm focus and soulful courage that seem a part of his distinct aura on-screen, and methodically fights the zombies as they slowly approach the farmhouse porch, stabbing their craniums with whatever tools and utensils he can find. 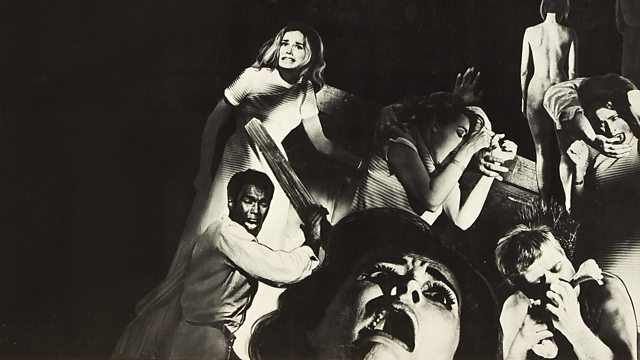 Ben, who is black, then begins to board up the doors and windows, working with tense, muscular precision to gather the materials he needs and then block the farmhouse’s weak spots from the inside, a wooden bunker. A trickle of perspiration shines on his brow, symptomatic of the encroaching peril to which his handsome, thoughtful features never quite succumb. He behaves like a man accustomed to terror, aware of its ferocity and mortal threat, and nevertheless quietly confident of his capacity to survive. In Jones’s rendering, moreover, Ben’s constant motion and intuitive ability to act in the face of horrifying death, is legible in every detail; from the moment of his entry into it, he is the magnetic centre of the film.

All the while, urgent (yet largely vacuous) radio dispatches describe “the crisis” engulfing the US, as a mysterious “epidemic of mass murder” rocks “villages, cities, rural homes, and suburbs, with no apparent pattern or reason”; the walking corpses are “ordinary-looking people”, the more knowing audience are told, “in a kind of trance”. In Romero's quasi-allegoric depiction, glazed, frenzied butchery and uncontrollable anarchy have become the new face of “ordinary” America, which persists in official channels to disseminate a narrative of sententious ignorance and incomprehension.

“So far we have been unable to determine whether any kind of organised investigation is underway”, the newsreader proffers, a blunt summation that nevertheless eloquently speaks to the film’s own epoch, with its raging fires of political unrest and floundering governmental authorities. As A S Hamrah has pithily observed, Romero’s shoestring horror-fest may be the closest thing to neorealism that American cinema produced in 1967-68, a period of eruptive violence at home (as we have seen) and imperial bloodshed abroad. In science-fiction writer Ursula Le Guin’s recollection:

[1968 was] a bitter year for those who opposed the [Vietnam] war. The lies and hypocrisies redoubled; so did the killing. Moreover, it was becoming clear that the ethic which approved the defoliation of forests and grainlands and the murder of non-combatants in the name of ‘peace’ was only a corollary of the ethic which permits the despoliation of natural resources for private profit, or the GNP, and the murder of the creatures of the Earth in the name of ‘man’. The victory of the ethic of exploitation, in all societies, seemed as inevitable as it was disastrous.

Romero’s contemporaneous plague-vision may also be understood as a war-haunted (and artfully hyperbolic) portrait of a society fed and grown sick on its own illusions, as the flesh-mouldering dead come back, hunting their former neighbours and fellow citizens for food. “The bodies must be carried to the street and burned”, a later broadcast informs surviving citizens: “soak them with gasoline and burn them... they're just dead flesh.” For Washington policymakers, arguably, the millions of charred casualties of the Vietnam war were similarly regarded as sub-human, or at any rate expendable.

As the film’s tension escalates, we learn that radiation from a faulty American space-probe may have catalysed the carnivorous resuscitation of the corpses that now stalk the land, and so threaten the characters we watch with baited, never-hopeful breath. This is post-Hiroshima, post-Nagasaki, Cold War cinema at its most brilliant and unsettling, saturated with a sense of intimate dread. For the audience, the horror is twofold, as we follow Ben’s desperate, strategizing thoughts, and as we realise that the overarching fable we remain immersed in is unfolding in the aftermath of a militarised malfunction; that the starving, contagious zombies being torched in the streets are themselves victims of America’s atomic hubris. 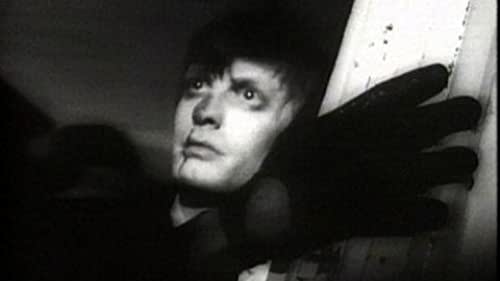 It’s for this reason that Romero’s famished dead, with their peeling, tarnished skin and stilted movements, can appear so strangely haunting; at times, they seem more pained, indeed, than the actual people trapped in the farmhouse. The roaming close-ups of the looming, hungry cadavers, feeding on human limbs outside, disturb, even today, because they evoke simultaneously the horrors of hunger and the visceral pleasures of murder – within a plausible paradigm of state ineptitude and military experimentation.

After Ben has fortified the farmhouse, he slumps, exhausted, on the couch, and lights himself a cigarette, before springing up again to scavenge the room. He finds a gun, hidden in a wardrobe, and proceeds, with deft efficiency, to load it with ammunition, as two (white) men emerge from the cellar, where they had been hiding. It’s at this point that Romero’s vision is particularly disquieting. “We lock into a safe place”, says Karl (Harry Cooper) to Ben, with an indignation verging on vitriolic, “and you’re telling us we’ve gotta risk our lives just ’cos somebody might need help!” His eyes have a hard, unfeeling fury as he barks this self-justification (which sounds like an accusation). Throughout all this, Romero’s camera flits and flows from every angle of the characters’ ramshackle, claustrophobic refuge, heightening the urgency and intensity of their circumstances, which seem uncannily familiar.

It soon becomes clear that Karl’s doctrine of seething self-interest has a racial charge. “I’ve got to get that gun”, he hisses to his wife, referring to the rifle in Ben’s hands – and unwittingly foreshadowing Stokely Carmichael’s real-time observation, that after King’s murder, once again, “black people know that they have to get guns”, if only to protect themselves against white rancour and its ubiquitous devotees. As here, Romero’s winningly tacked-together, interior canvas registers the dysfunctions and antagonisms of a racialized middle class both assured and covetous of its own entitlements. Karl remains convinced, dogmatically, of his own right to survive: “I don't want anyone’s life on my hands”, he exclaims, as Ben struggles to keep the house secure.

The cataclysm of the film’s penultimate sequence, as the troupe of internal refugees turn on each other, or are over-run by the dead, is gruesome and ferocious: a vision of hell, sewn together from the living flesh of an America as intransigent as it is vicious. When the posse of vigilantes strolls into the final act, restoring order and eliminating the zombies one by one (with a bullet to the brain), they are not heroic saviours. Rather, in their swagger and laconic mercilessness, they enact the arrogance of all the state-sanctioned kill-gangs of America’s past and future: trigger-happy, self-certain, and casually, ineffably white.

Ciarán O'Rourke is a widely published Irish poet, living in Leitrim. His poetry appears in the Culture Matters anthology, Children of the Nation, and his first collection, The Buried Breath, is available here.