Dennis Broe continues his review of series TV with a sceptical look at Comcast and Universal's Peacock, the latest streaming service from the world of capitalist media conglomerates

Do we need yet another television network/movie studio/cable station conglomerate turned into a streaming service whose main contribution is to put its back catalogue online?

This question is prompted by the conservative cable network Comcast’s launching of Peacock, its entry into a crowded field. The name summons up the NBC logo and is designed to invoke fond memories of that network, bought by Comcast to combine with the Universal film studio and challenge the likes of Netflix, Amazon, Disney+, AppleTV+ and HBO Max in what is becoming an increasingly crowded not to say polluted field.

These “hyperconglomerates,” media giants combining telecommunications, satellite systems, and digital delivery and transmissions, are often reactionary in nature. AT&T, the parent company of HBO Max, called “the most Republican of any publicly traded company” has long pushed for increased business deregulation and deeper tax cuts. Comcast, now spreading its tentacles across the world with its acquisition from Rupert Murdoch of the main European satellite service Sky, only recently withdrew from the thinktank ALEC, which promoted the murderous and racist stand-your-ground laws and is involved in a voter ID campaign to disqualify black voters. 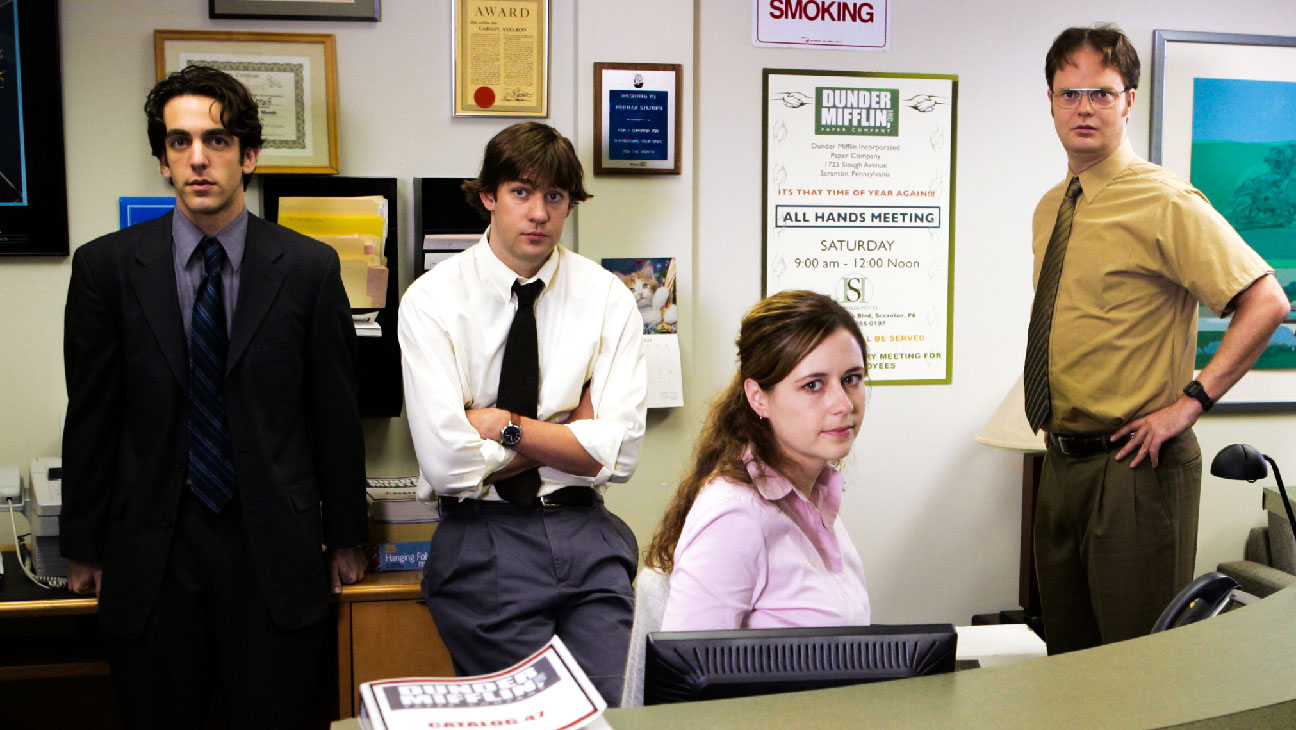 The answer to the question of Peacock’s relevance, given what has been proposed to anchor the channel so far, is a resounding ‘No!’ The streaming service flagship series is Brave New World, based on the Aldous Huxley dystopian novel. Peacock is using the old cable model of trying to make a splashy debut with a high-powered series which will conceal the fact that most of the content, as is always true on cable channels, is not new but simply cable-ready reruns of old shows and movies. A major draw here is The Office, whose brutally honest look at corporate capitalist office culture has made it one of the most watched shows in the world. The show ran on NBC but at this moment is still lodged in Netflix and won’t premiere on the streaming service until January 2021.

There will supposedly be an Office reunion episode which is designed to make viewers remember the magic of this highly satirical and often hilarious series. However, if the 30 Rock reunion is any indication, what it will do instead is evoke anger as viewers of the 30 Rock “reunion” thought they were tuning into an hour-long episode of the series and instead got what was predominantly an extended infommercial for Peacock, with some bits from the series sprinkled around the promos.

Instead of fond memories, the show might have made viewers question how hard-hitting or edgy 30 Rock, whose title celebrates NBC’s corporate headquarters, ever was to begin with. The series was always made up more of slight jibes rather than actual pokes at the industry. It didn’t bite the hand that fed it in the way that actual satires of the industry such as The Larry Sanders Show or Episodes, did. Instead it sprinkled magical fairy dust over a network that had been largely out of touch since The Office ended, perennially caught between the aging conservative heartland audience of CBS and the hipper, female, urban and sometimes progressive audience of ABC. For the better part of a decade it has not been able to make up its mind what it was, while frequently floating blandly between the two poles.

The stellar program on the network at the moment is Seth Meyer’s Late Night. His segment “A Closer Look” (available on YouTube) has become much harder-hitting during the lockdown, at it pounds away at Trump, Senate Republicans and police and paramilitary strongarm tactics in the streets. Increasingly grabbing the spotlight though, especially in the wake of the Black Lives Matter protest, has been one of its writers, Amber Ruffin, whose recounting as a black woman of her daily humiliating and intimidating experiences with the police was a series highlight. 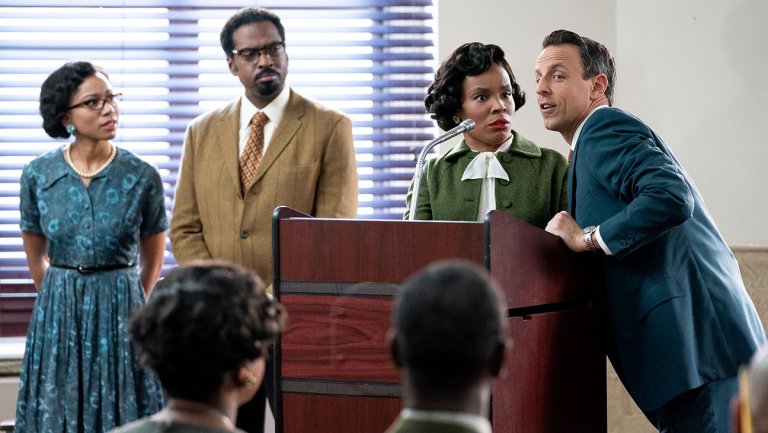 The funniest and baldest satirical moment on network TV this season was Seth and Amber’s faux “trailer” for White Savior, a send-up of trash like The Green Book where Meyer’s white guy constantly appears to take the credit and get the attention for the hard work Ruffin’s characters carry out. At the end it is Meyer’s liberal sitting on the bus who invites Ruffin’s Rosa Parks to “take a seat” next to him, hogging the limelight in her challenging of racial inequality. Amber Ruffin’s show on Peacock is being rushed into production, and given the lack of quality material on the service so far, it can’t come fast enough.

Which brings us to Brave New World, (soon available on Sky in the UK) a soft-focus gauzy mess of a show that gets Huxley completely wrong. It turns his criticism of the way technology in the wrong hands is capable of promoting conformity into an Ayn Rand, Trump-like paean to narcissistic and suicidal individualism. There is indeed a way the novel could be effectively updated in the digital age to talk about how all experience is being flattened by monopolistic entities like Amazon, and by streaming services like Peacock. But that might be hitting too close to home! 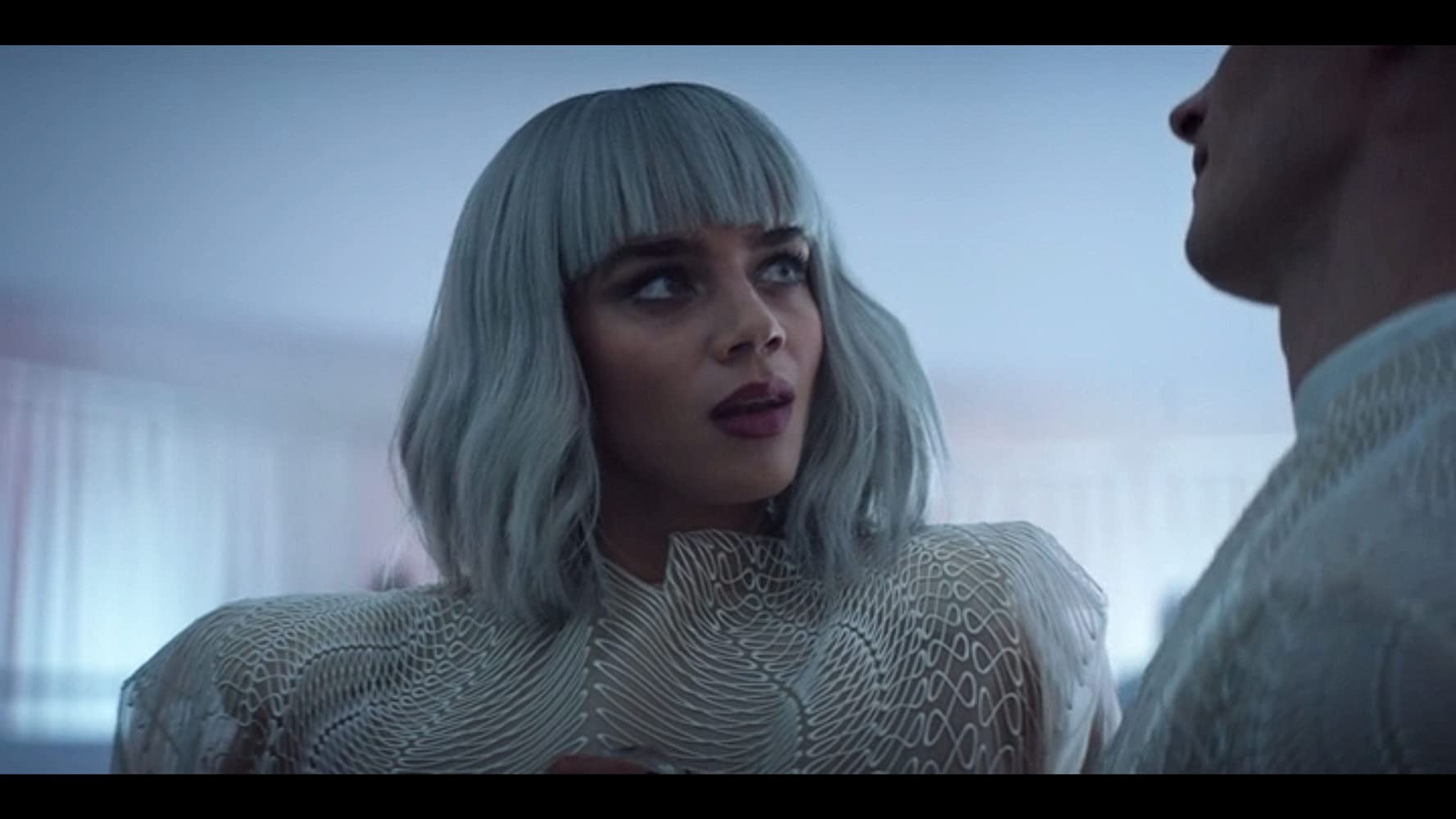 Instead the series has the ultra-rich mainly worried that they can’t have multiple dates with the same lover as monogamy is outlawed, replaced by titillating soft-focus orgies. Outside this Valley of the Dolls shtick are the poor who live in the Savage Lands in a kind of Mad Max broken-down world. But here too their major concern is not that they have no food, shelter or employment but that they have “lost their individuality,” whatever that means. The satire and description of a devastated world with a rich urban centre and an utterly left-for-dead periphery, one where our world is heading, is much sharper and accurate in the dystopian movie series The Hunger Games. Compared to it, this version of Huxley doesn’t even have the heft and weight of Netflix’s version of Sabrina the Teenage Witch.

Far more effective and affecting is Peacock’s other revival, the second film of the long-running USA series Psych, titled Lassie Come Home (available on Prime Video in the UK).  USA is owned by NBC, as the major network’s owned many of the prime cable channels, but did not own up to that fact, making it appear that cable was a land of plenty divorced from network television when in fact it was dominated by it.

The heart of Psych, a series about a fake psychic detective, was always the repartee between the bumbling would-be Sherlock Holmes Shawn Spencer (James Roday who co-wrote the film) and his number two, his sidekick Gus (the African-American actor Dulé Hill). There is certainly an uncomfortable element to the unequalness of the bantering, with Shawn always coming up with his own names for Gus, barely addressed in the follow-up film as Gus now gets to choose which name Shawn comes up with for him that he can tolerate. But their playfulness and knowledge and revelling in the more obscure and degraded back alleys of pop culture can be infectious.

The second film follow-up to the series is built around affectionately honoring a member of the cast, Timothy Omundson, who played Lassiter, the hard-edged official police foil to Shawn and Gus’s lackadaisical – but ultimately always more effective – sleuths. 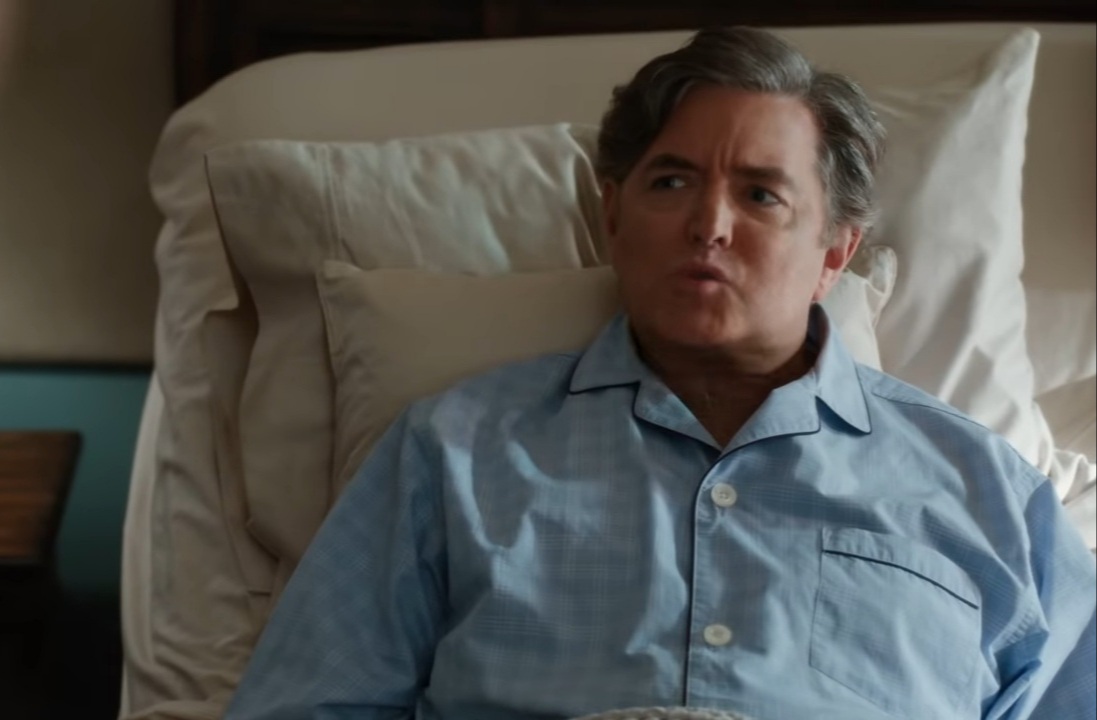 Omundson had a stroke and was unable to be a part of the first film. This second film is written around him, with the stroke explained in the film as the result of a gun battle, resulting in his actual inability to speak in the former stern voice of the character, and with his physical paralysis incorporated into the film. The last sequence has him overcoming both in a way that is touching and heartfelt, a tribute to working with the disabled, who themselves are rightly beginning to demand a place on network television and at the centre of modern life.

....so really, not very necessary

The sincere and warm sentiment of the cast and writers for the actor and his condition comes through strongly in the series and makes it authentic, everything the promo hucksterism of the 30 Rock reunion and the misguided banality of Brave New World are not. There is a long way to go before Peacock spreads its wings and displays its colourful plumage, or for that matter even justifies its existence.