Dennis Broe presents the first of a two-part topical study of Robert Colescott, whose politically committed art tackled issues of unequal racial and gender representation, and the history of racial exploitation and domination in the U.S.

One of the founding members of New Black Art just reaped the rewards of his painterly prowess. Robert Colescott’s monumental George Washington Carver Crossing the Delaware (above) recently sold for $15.3 million and is thus far the highlight purchase of the George Lucas’ Museum of Narrative Art, scheduled to open in Los Angeles in 2023.

This was nearly 17 times what any previous Colescott painting sold for and unfortunately the artist, who died in 2009, will not reap the rewards.

The painting, which shows a ragtag band of black workers in their professions and at leisure in a ragged vessel with a patch that could at any moment spring a leak, is a satirical rendering of the 1851 staple of Americana Washington crossing the Delaware. Colescott’s humorous rendition was described by the Lucas Museum head as “racially, socially and historically charged” and “at once a contemporary and historical work of art.”

That description suits Colescott’s art as a whole, which emerges after a long and arduous journey out of the dominant mode of American painting when he entered the field, Abstract Expressionism, through his engagement with Egyptian art, and his own, sometimes hilarious, sometimes painful, observations and experience with the legacy of colonialism and racism. These insights led him to raid the treasure trove of Western art to imprint his own stamp on it in a way that was more expansion of Black representation in line with the work of artists, filmmakers and television showrunners today than simple “appropriation.” 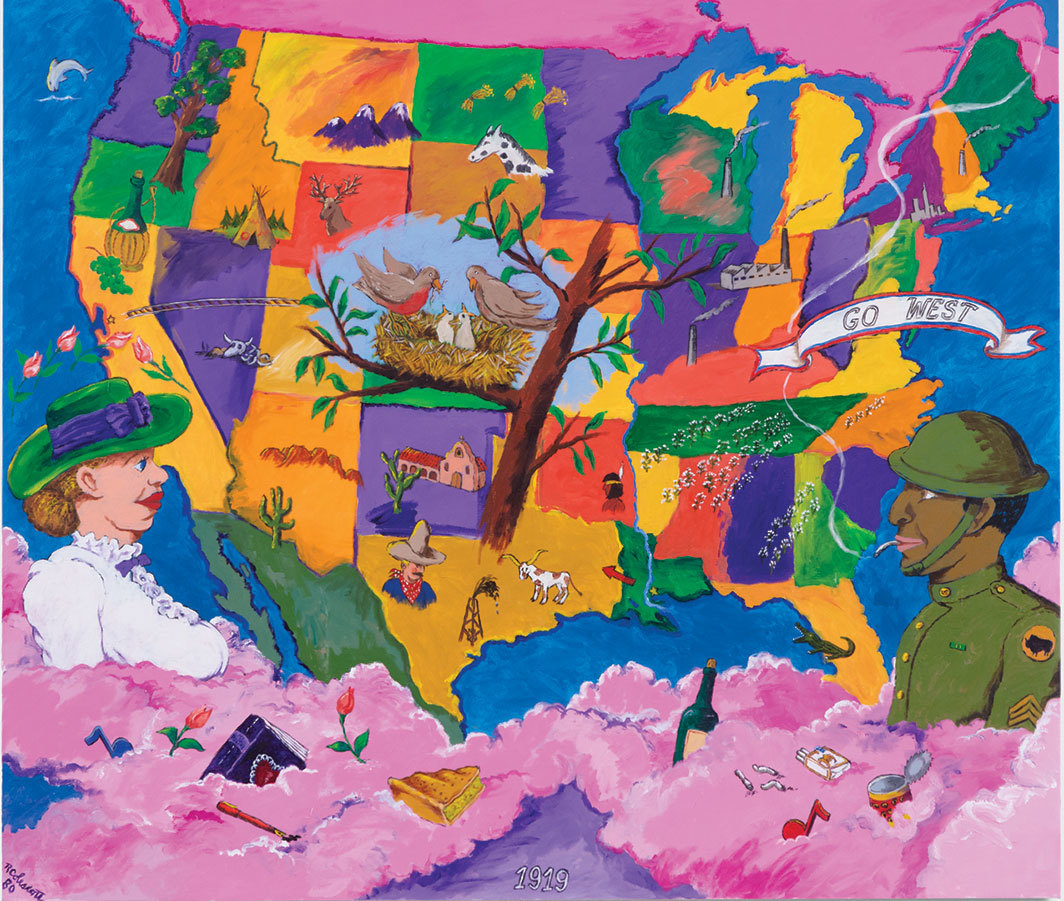 Colescott was born in Oakland in 1925 after a westward migration of his parents described in his painting 1919 (above). In it his mother, an African-American who identified as white, in white dress and green hat with a bow, and his father, with mixed African and Native American heritage in army fatigues bearing the mark of the Buffalo Soldier, face off on opposite sides of the country. His father was a jazz musician who was forced instead to work on the traditional Negro job as a Pullman conductor. Colescott, his mother’s favourite, as a teenager “passed” by enlisting into the army as white, fighting with a Caucasian unit in World War II. It wasn’t until an extended trip to Egypt, where he discovered a history of Black Art, that he stopped passing - denying his African-American heritage - at the same time as he definitively discontinued a flirtation with abstract art.

A second major influence on Colescott was his study in Paris with the cubist Fernand Leger in 1949, courtesy of the G.I. Bill. After Leger returned from the U.S. after the war, he abandoned the abstract Cubist inheritance for a figurative style that was still highly stylized, with meticulous straight lines crisscrossing the composition. But the compositions themselves now incorporated some of the direct language of advertising, being stark oblongs of figures designed to be accessible to ordinary people. Leger refused to look at Colescott’s Cubist abstract renderings and instead steered the young painter toward the kind of representational exhibited in Leger’s own Construction Workers, a kaleidoscope of workers rebuilding France after the war, including an Algerian worker as a centrepiece. Colescott later reworked this motif in the American context as Hard Hats, showing the hierarchy of white American workers with black workers surrounding them and underpinning their labor.

The major change in Colescott’s work though occurred because of two sojourns in Egypt where he was confronted with 3000 years of Black Art. He was particularly enamored with the paintings in an ancient burial site in the ruins of The Valley of the Queens. These tomb murals of Nubian female royalty had figures floating freely in space everywhere surrounded with splashes of pure colour. Colescott incorporated this freedom and this concentration on the Black female form into a series he did at the time, a highlight of which is 1967’s depictions of one of these queens in Nihad in the New World, with the title suggesting his wish to transport what he learned in Egypt to the African-American context at home. The importance of Egypt to Colescott and Colescott to Egypt was acknowledged in the recent “Robert Colescott: The Cairo Years” exhibit at the American University of Cairo. My exhibition talk on Colescott is available here.

Along with this immersion in a tradition of Black Art went his being thrown into the turbulence of the 1960s. First he was forced to flee Egypt because of the onset of the Arab-Israeli Six Days War, thus experiencing Middle Eastern colonialism firsthand, and then he returned to the political hotbed of San Francisco as the Vietnam War Protest and Haight Asbury counterculture reached its peak in 1968.

As Colescott made the transition from pure abstraction to a more socially and politically committed art, a journey that was not validated at the time in the art world, he was sustained by his university connections, the last place artists could find public support for their work, due to the dominance of abstract art in the gallery system.

Here though he was also thwarted. He wanted to be full time faculty at Berkeley, where he had gone to school, but was passed over for a job. He finally went to the University of Arizona at Tucson, where he became the first faculty member in the art department to receive the prestigious title of Regent’s Professor.

The triumph of Abstract Expressionism in the postwar 1940s and 1950s and its subsequent influence on conceptualism, minimalism, serialism etc. was accomplished at the height of the Cold War with the blessing of the CIA, and through the silencing of two other currents of modernism, the American Social Expressionists and the Mexican Muralists, both of whom retained the political thrust of earlier modernist movements.

This suppression, detailed in my book Cold War Expressionism: Perverting the Politics of Perception, subtitled Bombast, Blacklists and Blockades in the Postwar Art World, saw the work of the Popular Front artists of the 1930s and ’40s dumped on the market and sold for pennies. Their work was outlawed in the prestigious galleries which came into prominence with the decline of government support for an art of the people. What grew up alongside what the banker and later vice-president Nelson Rockefeller termed “free enterprise painting” was a privatization of visual art, was designed to be consumed by the burgeoning postwar corporate elite.

The high priest of the movement, the critic Clement Greenberg, urged artists to re-engage with “those to whom…[art] actually belongs – our ruling class.” Tom Braden made the apparently not very arduous leap from the executive secretary of the Rockefeller’s Museum of Modern Art, the temple of Abstract Expressionism, to the CIA’s director of cultural affairs. There he extolled the virtues of the new abstraction which he claimed “constituted the ideal style” now that its artists had “left behind [their] earlier interest in political activism.”

The artists themselves had mixed views about this adoption of their art where once monumental murals that expressed social struggle were replaced by large-scale abstract gaudy color schemes, such as the yellows and reds of Mark Rothko’s 1953 Untitled No 10, colours that announced the global triumph of American consumerism in works that now hung on suburban walls and in corporate lobbies.

Meanwhile, the political artists, who had been supported by the government in the New Deal 1930s were now forced into exile – for example, the artist Alice Neel, currently the subject of a retrospective at New York’s Metropolitan Museum, had to move to Spanish Harlem. There, she painted portraits of its inhabitants and grey, dingy landscapes such as Rag in Window, that expressed the loneliness of her political exile and contrasted with the productivist, corporate spirit of that other symbol of the New York landscape – the skyscraper.

Another prominent political artist, Jacob Lawrence, who described himself as an expressionist painter and whose subject matter centered on ordinary black workers, also fell on hard times and, at the height of this Cold War repression, had a mental breakdown and spent a year in an asylum. His work was scattered to the four winds and a recent painting, ironically of farmers contesting the power of the government in Shay’s Rebellion as part of the series “The American Struggle,” has recently been recovered after it was passed around and sold at a charity art auction.

The other suppressed movement prominent in this period, which Colescott when he came out as Social Expressionist would have affinities towards, was that of the Mexican Muralists, and particularly in the 1950s and ’60s the work and path of David Alfaro Siqueiros. The movement vied for renown with the Abstract Expressionists at the 1950 Venice Biennale. It was a triumph and then toured Europe where it was finally savaged by French critics – with American backing – and re-confined to Mexico. It didn’t re-surface in the American consciousness until last year’s thoroughgoing reexamination at New York’s Whitney Museum in the wake of which it was claimed the Mexican Muralist’s were more important as influences on American modernism than French artists. 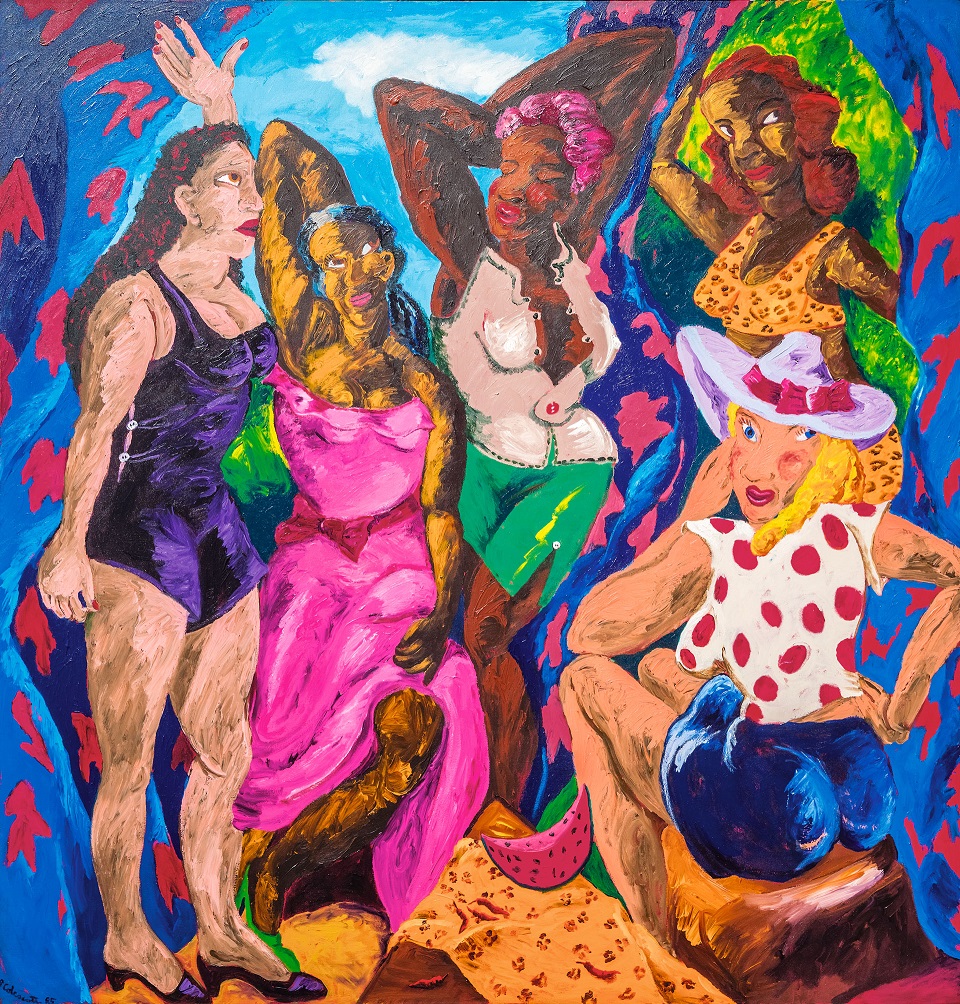 Siqueiros was one of the first to represent the female Mexican indigenous body in a corporeal way, in for example 1924’s Peasant Mother. That might have sensitized Colescott in his later representation of many shades of African and African-American female bodies, most notably in his 1986 Picasso takeoff Les Demoiselles d’Alabama (above). Colescott, who had watched Diego Rivera’s painting of a mural of the Golden Gate Bridge, also had in common with Siqueiros the journey to Egypt where in ’65 Siqueiros declared himself to be in favour of the non-aligned movement in an extended stay in Nasser’s Egypt.

Colescott himself satirized the gallery-collector system of privatized and marketized or commodified art in his work Tea for Two (below). Colescott appears as himself, a hip black artist in checkerboard pants, leaning languidly on the fireplace of an affluent home. The artist knows what sells, how to brand himself, and how to appeal to the sexualized white female rich collector who gazes at him. The curlicue wafting of the artist’s cigarette and the tea is picked up in the abstract designs on the canvas the artist is peddling. A black servant delivers the tea, highlighting the structure of racial inequality that underpins the entire arrangement. 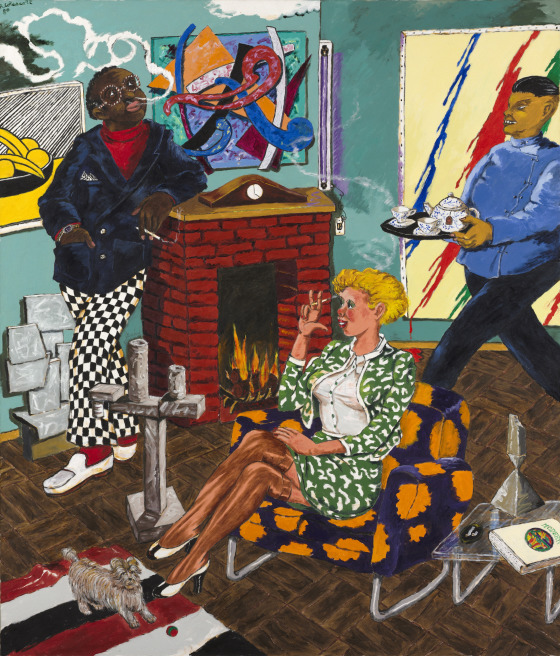 Colescott’s work in breaking free of the legacy of Abstract Expressionism, detailed in Part II (to come), would be a sustained challenge to the still formidable injunction that art should properly remain silent on the world’s increasingly more violent devastation under a form of capitalism where greed knows no bounds; or that art’s sole role must be confined to obscure and wry comments on its place in a certain highly limited and reified area of commodity exchange. In the 1980s and 90s Colescott would move beyond Tea for Two to take on wider issues of unequal racial and gender representation and to put on display the ways the U.S. postcolonial system was built on a history of racial exploitation and domination.