This is a hugely stimulating collection of nine essays of varying length which focus on issues related to the domestic and foreign politics and culture of the Indian subcontinent. Amongst the political ponderings, the world-renowned author explores the process of how the external world merges with the internal psyche for literature to occur. Arundhati Roy discusses the backdrop to her novel-writing and her increasingly powerful political essays, making it clear that both genres blend into one another, and that any supposed binary relationship between the two does not exist for her.

The first essay is from a 2018 lecture called ‘In what Language does Rain Fall over Tormented Cites?’ This was delivered at the W.G. Sebald Literary Translation event at the British Library. Although much of this essay focuses on the political situation in contemporary India, it also asks the question “which language should a non-English writer write in?”. Roy tells of interesting encounters she had while promoting her pioneering first novel The God of Small Things. The writer tells us how the colonial past still haunts the country today:

Fundamentally, India is in many ways still an empire, its territories held together by its armed forces and delivered by Delhi, which for most of her subjects, is as distant as any foreign metropole (p.11).

Critics of Roy have said traces of colonialism are there for the whole world to see within the writers of India today. Roy, however, sees her writing as a political act of challenging the postcolonial status quo.

The politics of writing and the writing of politics

These essays entwine the domestic politics of India with the art of writing, which she sees as an implicitly political act. This is a book essentially about culture: about the art of writing and how to write whilst living through times of political destruction. Roy has interwoven the personal and political spheres of human existence – a radical stance which also underpins her two great novels, The God of Small Things and The Ministry of Utmost Happiness. She states in the essay ‘Language of Literature’ that:

the place for literature is built by writers and readers. It’s a fragile place in some ways, but an indestructible one. When its broken, we rebuild it. Because we need shelter (p.78).

The act of writing becomes a political one which cannot be separated from fiction, so literature and the political become irrevocably connected. One cannot survive without the other from her perspective. The great Marxist critic, John Berger, once said to her:

Your fiction and non-fiction, they walk you around the world like your two legs (p.79).

Could I write as compellingly about irrigation as I could about love and loss and childhood? Not as reportage, but as a form of storytelling? Was it possible to turn these topics into literature? Literature for everybody – including for people who couldn’t read and write, but had taught me how to think, and could be read to? (p.87)

Roy clearly sees her political writings as an important form of narrative which is firmly embedded in the heart of literature. In order to fully appreciate these essays, the reader would be advised to become familiar with her two novels:

I knew that if The God Of Small Things was about home with a broken heart in its mists, The Ministry Of Utmost Happiness would begin after the roof had been blown of the home, and the broken heart had shattered and distributed its shards in war-torn valleys and city streets (p.88)

Roy uses her novels to amplify her political voice. She gives a voice to the voiceless – the poor, the oppressed, the outcasts of society surviving in the margins of the Asian sub-continent.

In the novels, Roy addresses the politics of the war-torn region of Kashmir:

The story of Kashmir is not the sum of its human rights report…For a writer Kashmir holds great lessons for the human substance. About power, powerlessness, treachery, loyalty, love, humour, faith. What happens to people who live under military occupation for decades? What happens to language? The narrative of Kashmir is a jigsaw puzzle whose jagged parts do not fit together. There is no final picture (p.89).

Geopolitical hotspots become Roy’s characters and are given voices. She not only inhabits these worlds but almost becomes them, through the process of character-building.

The architecture of Indian fascism

The next two essays, ‘The Silence is The Loudest sound’ and ‘Imitations of an Ending’, explore the dire situation in Kashmir and the rise of Hindu nationalism within the wider Indian state. The recent set of legislation surrounding citizenship known as the National Register of Citizens (NRC) are compared to the infamous Nuremburg Laws of 1930s Germany. Roy informs the reader of the lives of people living under fascism and the BJP-inspired mob mentality daily. She chillingly writes that:

As the world looks on, the architecture of Indian fascism is quickly being put into place. (p.105)

By directly comparing Modi’s India to Hitler’s Germany, Roy not only jolts the attention of the reader, but also hands responsibility onto the reader to help avert another genocidal catastrophe. She is accusing Western powers of standing by as the Rome of secular India burns in the flames of sectarian hatred.

Roy recounts the case of a young man, falsely accused of a crime, who was murdered in broad daylight by a mob wielding sticks and axes:

The lynching of Tabrez Ansari illustrates just how deep the rot is. Lynching is a public performance of ritualized murder, in which a man or woman is killed to remind their community that it lives at the mercy of the mob. (p.122). 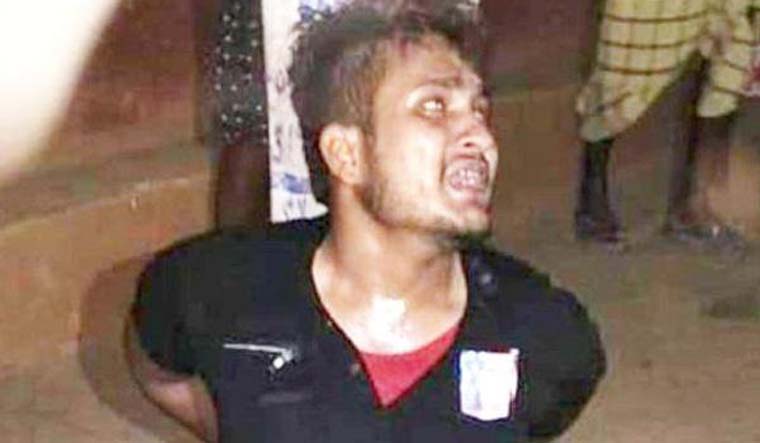 According to government records, lynching is becoming another pandemic in the country. The act of lynching demonstrates a terrifying balance between inclusion and exclusion of the mob and the community.

The smoking debris of Modi’s India

Why does Roy devote so much of her writings to explain in detail the politics of India? The reason which becomes clear is that her surroundings are the backdrop in her novels. Very much like nineteenth-century English writers such as Dickens and Gaskell, who depicted characters with a commentary on the Industrial Revolution, child poverty and the widening gap between the wealthy and the poor, Roy creates novels out of the  smoking debris of Modi’s India.

Another essay is the 2020 Clark Lecture in English Literature which Roy delivered earlier this year. This essay is entitled ‘The Graveyard Talks Back’. It is where her second novel is situated and is also a pun on the influential 1980s study of colonialism, ‘The Empire Writes Back’. Roy discusses how the geography of space can shape a novel. She writes:

I have given about the place for literature in the times in which we live, and about the politics of language, both public and private. (p.151)

In this essay, she shines a light on the physical act of writing. She explains the importance of her view from the window:

Some writers may wish to shut the window or move to another room but I cannot so you will have to bear with me, because it is in this landscape that I hear my stove and store my pots and pans. It is here that I make my literature. (p.153)

In the rest of the essay, Roy describes what is happening on the ground in Kashmir, which is integral to the narrative of her second novel, The Ministry of Utmost Happiness. Roy also explains in detail the caste system, which remains a hugely controversial aspect of Indian society:

The principles of equality, fraternity, or sorority are anathema to the caste system. It’s not hard to see that the idea of some human beings are inherently superior or inferior to others by divine mandate slides easily into the fascism of a master race. (p. 163)

Roy writes in this essay of how the internal and the external worlds of human experience are fundamentally connected:

We keep our complicated world, with all its seams exposed, alive in our writing (p.177)

She talks again of the many similarities of the European fascism in the 1930s to the rise of Hindu nationalism in the 21st century. In her final essay ‘The Pandemic Is a Portal’ Roy, is optimistic for the future, not only for India but the world. She writes powerfully of how:

Covid-19 has made the mighty kneel and brought the world to a halt like nothing else could..…in the midst of this terrible despair, it offers us a chance to rethink the doomsday machine we have built for ourselves (p.214).

Roy ends this collection on a note of hope or at least the possibility of hope for the post-pandemic future. By referring to this pandemic as a chance for us to ‘let go’ of:

The prejudices and the hatred our dead rivers and smoky skies..(and be)…ready to imagine another world. And ready to fight for it. (p214).

After all the despair and sadness discussed in this highly readable collection, Roy is refreshingly optimistic that a better world awaits us on the other side of the portal.

TV, internet and other media