Jenny Farrell marks Tomás Mac Síomóin's birthday on 19 February with an essay on this subversive, internationalist writer, who translated the Communist Manifesto into Irish, satirises  contemporary neoliberal Ireland in poetry and prose, and is ignored and unofficially censored by the Irish literary-political establishment.

One of the tragedies that befell Ireland after Independence was that the aspirations for this newly liberated state were almost immediately replaced, as Liam O’Flaherty put it, by the “tyranny of the Irish Church and its associate parasites, the upstart bourgeoisie, the last posthumous child from the wrinkled womb of European capitalism”. O’Flaherty’s novels of the 1920s describe this sad state of affairs and its impact on the people of Ireland.

Following a few short years after partial Independence in 1922, the authorities of the Irish Free State set up the Committee on Evil Literature in 1926, from which grew the Censorship of Publications Board in 1929. The banning of Liam O’Flaherty’s “The House of Gold” was its first act. Ostensibly targeting ‘indecent’ literature, it was a de facto ban on intellectual exchange of any kind, causing intellectual and cultural stultification.

The impact of the official banning of books and its knock-on effect of unofficial and self-censorship can hardly be overestimated. While official banning is no longer implemented, unofficial censorship continues to this day. It is at its most serious in Irish language literature. Students keen to propel this native language into modernity are presented largely with inferior modern literature in their courses, or ‘safe’ stories idealising rural life. Socially subversive and global issues do not feature, being considered “too dark”.

But frustration generated by such unofficial, low-key censorship, has been the fate of Tomás Mac Síomóin. Small editions, absence from libraries and bookshops, missing from reading lists in school and universities – he is patronisingly regarded as too difficult, in short unsuitable. A developed modern literary culture doesn’t exist in Irish, he admits ruefully.

Mac Síomóin, who holds a PhD from Cornell University, worked as a biological researcher, university biology lecturer, journalist, editor, publisher and writer, initially exclusively in Irish. His literary output is remarkable by any measure. He writes poetry, short stories, novels, and stands out as a translator of world literature, both fiction and poetry, into Irish, or Irish poetry into Spanish, Catalan and English. He also writes non-fiction.

Mac Síomóin has won literary awards from the Irish Language authorities, which have never quite translated into the national recognition and literary fame they deserve. Out of disgust at the abandonment by modern Ireland of the social, linguistic and cultural ideals of the Irish Revolution and their replacement by Anglo-American consumerist values, Mac Síomóin left Ireland, like so many writers before him. He began to translate some of his own work into English in an effort to reach a broader audience. Among these translations are his collection of short stories, “The Diary of an Ant”, and the novels “The Cartographer’s Apprentice” and “Is Stacey Pregnant”. 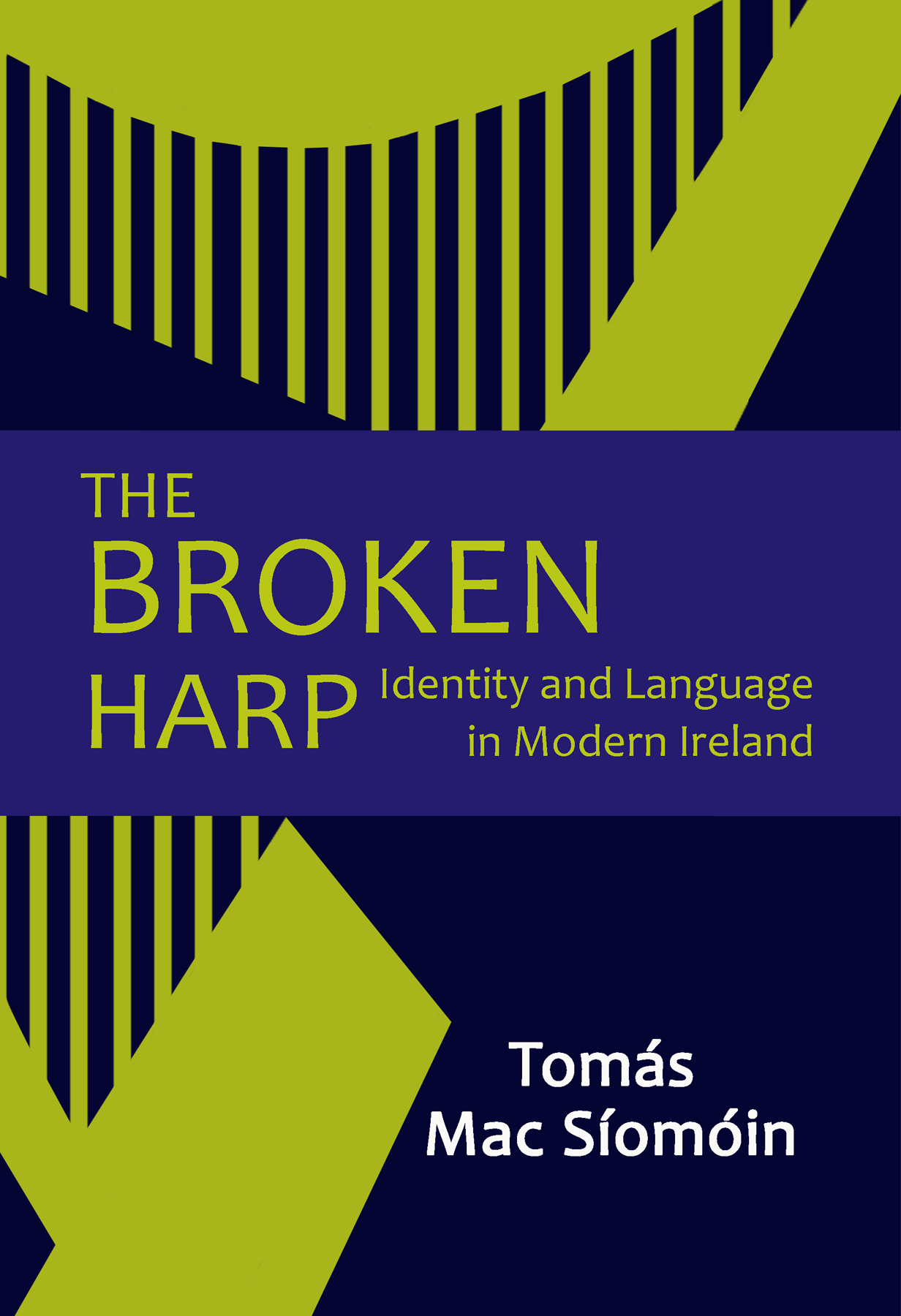 Two further books, the non-fiction exploration of the Irish neocolonial psyche, “The Broken Harp” , and his brilliant re-writing of Swift, “An Immodest Proposal”, he penned directly in English, and which has been published along with Swift’s original text and one by O’Flaherty, “The Cure for Unemplyment”, by Nuascéalta under the title “Three Leaves of a Bitter Shamrock” (2014).

As is evident in every word he writes, Mac Síomóin is an internationalist and has deep regard for social revolutionaries, both in his native Ireland and abroad. He has translated Mayakovsky into Irish, he has written a novel set in revolutionary 19th century Cuba and written while living in contemporary Cuba. He has translated and published “The Communist Manifesto” into Irish. His most recent book is the bilingual (Irish-Spanish) account of the contribution of the Argentinian-Irish Bulfin family to the cause of Irish independence.

Apart from its roots in the 20th century Gaelic poetries of Ireland and Scotland, mainly Máirtín Ó Direáin and Somhairle Mac Ghill-Eathain, Mac Síomóin mentions a range of international influences on his poetry, such as Fernando Pessoa, Nicanor Parra, and Antonio Machado, on his work. The Czech, Miroslav Holub, in English translation was an early influence, his dual vocation of scientist and poet serving as a model for his own life path.

Currently, he is working on a book of translations into Irish of his selection of the Spanish poetry of Antonio Machado: “Ceol an Easa” (Waterfall Music) to be published in 2019. A semi-autobiographical book of memories and musings is still in the forge. An “Interview with the Devil”, a text in Irish (or possibly bilingual), is still in the preparatory stage.

Mac Síomóin has in common with O’Flaherty and others that he writes scathingly, in the great Irish satirical literary tradition, of contemporary neoliberal Ireland and the inhumanity of the contemporary world. This has found its expression in dystopian visions, where hope of emancipation is scant, but extant in some small way.

The plot of Mac Síomóin’s first and longest novel, the untranslated “Ag altóir an diabhail: striptease spioradálta Bheartla B (At the devil’s altar: the spiritual striptease of Beartla B), develops in a rural lunatic asylum, where an inmate (Everyman) is driven to madness by his failure to solve the enigma of woman, in this case, the cyborg Juliet. The tawdry illusions that cloak the idyllic valley in which the asylum is located—essentially contemporary Ireland, are peeled off, one by one.

In his novels, Mac Síomóin presents the reader with imprisoned people. In “The Cartographer’s Apprentice”, they are confined to a certain space and time, which is governed by a menacing theocracy. In “Is Stacey Pregnant”, the prison is a traffic jam, from which there is no escape and that ends in sinister disappearances of people engineered by a new-old breed of Orwellian pigs. Inhuman machinations, willingness to sacrifice people, denial of dignity, lurk everywhere. Such dystopia has its firm and growing roots in our 21st century normality. Yes, it may strike the reader as extreme, but taken as hyperbolic metaphor, it serves perfectly the purpose of highlighting the true and unmasked nature of our times. Mac Síomóin writes with a Swiftian black humour that creates enough distance for the reader to reflect on the text.

Mac Síomóin has no time for “rural idyll” literature. “Thinking outside the box is of the essence of my vocation as a writer” he says. “We inhabit a unidimensional material universe plus its cognitive shadow, our rationalization of that reality. Alternative organizations of experience within this reality are subversive, evil, forbidden by herd wisdom.” Such “dystopian” narratives, fragment a fundamentally amoral reality, laying the groundwork for a radical conceptual re-ordering. Thus, the traumatic car jam of “Is Stacey pregnant?” is an imagined Euro-Ireland in the grip of neoliberalism. A traumatic stress applied to this society dissolves its previous ideological superstructure and social cohesion. “The Cartographer’s Apprentice” relates the need of all coherent societies to guarantee conformity to their norms. Signaling dysfunctionality is part of the creative destruction that must always precede the new”, he says.

Intriguingly, Tomás Mac Síomóin adopts a different voice in some of his poetry. Here, we encounter the same interests but a different handling of the material, a separate tone. Mac Síomóin equates poetry writing, for simplicity’s sake with painting, where all the infinite and ever-evolving resources of language, rhythm, metaphor etc. are available to the poet to create whatever effect he wishes, whatever image he wishes, or feels impelled to create, for example.

Tomás Mac Síomóin continues a glorious tradition. The generation before him produced authors with a social conscience and political understanding, writing in Irish. Among these are such outstanding political activists as O’Flaherty and Mac Grianna, members of the CPI; Ó Conaire, former IRA member, trade union activist and socialist, once contesting an election; Pearse, cultural nationalist and leader of a military uprising against British imperialism in 1916; Ó Cadhain an IRA member, socialist and political prisoner.

All contributed significantly and lastingly to Literature in Irish, unafraid to creatively generate new linguistic forms, contributing at this level, too, to the growth and renewal of the Irish language. It hardly needs pointing out, that this is the natural way for a language to expand in its contemporary registers, not by bureaucratic decree.

In this sense, Tomás Mac Síomóin - through the pioneering nature of his Irish language literature as well as his political understanding and contribution - is very much in the tradition of O’Flaherty, Ó Conaire, Pearse, Mac Grianna and Ó Cadhain.

Tomás Mac Síomóin, who turns eighty on 19 February, has stood firm against those who would rather he wrote of thatched cottage idylls or middle-class, mid-Atlantic, midlife crises. He shows us the world as it is and invites the reader to see it as incommensurate with humanity`s ideal. In order to change the world one must first understand it. As Liam O’Flaherty wrote:

And the censorship of literature was imposed, lest men like me could teach the Irish masses that contact with dung is demoralizing, that ignorance is ignoble and that poverty, instead of being a passport to Heaven, makes this pretty earth a monotonous Hell.

Terry Eagleton’s comment in his article “Only Pinter remains” (The Guardian, 2007), that “For almost the first time in two centuries, there is no eminent British poet, playwright or novelist prepared to question the foundations of the western way of life” applies equally to Ireland, if ‘eminent’ means known to the general reading public. In Ireland, too, the literary-political establishment suppress any serious challenge to the status quo. This is why we need writers such as Tomás Mac Síomóin.

Let me end with one of his poems, about Victor Jara, the great Chilean communist poet and singer, who was brutally murdered by Pinochet’s goons after they had destroyed Salvador Allende’s socialist Chile on September 11th 1973. Jara's weapon was his guitar. During the extended English genocidal campaigns in Ireland, Gaelic poets and harpists were systematically hunted down and murdered.

They heard a harper
Boldly strum
On the floor of their hell;
Weaving the dawn
Through the words of his song
They smashed his fingers
One by
One

But untouched
By nimble fingers
Each chord sang
Its song of the dawning,
Of mankind’s hope,
Of the wretchedness of our days

They ripped each rebel chord
From its wooden bed.
‘Viva la muerte’ howled
Those sons of Cain.

A rebel hand drew back
the grave`s stone lid
In the dawn’s bleak light
The grave is empty;
That selfsame angel proclaims again
To the selfsame deaf man
That this harp shall never be silent
From now to the crack of doom.