Black Lives Matter, slavery, the Beerage and beer in 2020

They Stream Movies Don’t They?

The global drug pandemic, police supremacism and the corruption of film-makers

Adam Stoneman works in museum education. He has written for Jacobin, Open Democracy and Novara Media.

“Great monuments are erected like dams, opposing the logic and majesty of authority to all disturbing element; it is in the form of cathedral or palace that Church or State speaks to the multitudes and imposes silence upon them.” - George Bataille

Over 55 statues have been toppled, removed or slated for removal in the United States and 12 in the UK since the protests over the murder of George Floyd by police in Minneapolis began in May. Pedestals are still littered with protest signs and covered in graffiti: Portland stone, cooling from the heat of battle.

Upon these empty plinths there are proposals to erect new monuments to figures worthy of commemoration such as Charles Hamilton Houston, Paul Stephenson,or even Missy Elliott. But before the bronze is cast, it is worth reflecting not only on what we want to memorialise as a society, but how.

There is reason to be wary of repeating the anachronistic aesthetics of the ‘heroic figurative statuary’, as David Olusoga terms it, with a new cast of historical characters. Monuments signify majesty and authority, casting subjects into the canon of History, beyond contestation or reproach. They disavow history, and bestow a sense of permanence — carved into the rock to appear as a natural feature, Mount Rushmore, Trump recently declared, ‘will stand forever as an eternal tribute’. As Henri Lefebvre wrote, monuments ‘mask the will to power and the arbitrariness of power beneath signs and surfaces which claim to express collective will and collective thought.’

Upon its plinth, the statue of Edward Colston claimed its place immemorial in British History. Residing now in Bristol Museum, after a brief spell at the bottom of Bristol docks, it can be properly understood as a historical object — with a relatively recent and controversial history, erected as it was a century and a half after Colston’s death.

Laura Mulvey and Mark Lewis’s film Disgraced Monuments, made for Channel 4 Television in 1994, examines the fall of the USSR through the toppling of Soviet monuments. The aesthetic of monumentalism deployed by the Tsar was reappropriated by Stalin as a ready-made language that could promote loyalty for the Soviet state, with statues and busts in every town square and public building. ‘The cult of the Tsar returns’, notes Mulvey, with Stalin’s cult of personality embodied in monuments; ‘He was a Gorgon Medusa, everything in sight immortalised in stone’. But by leaving the aesthetic regime of monumentality intact, the statues, which represented the authority of the state, eventually fell victim to the forces of popular revolt. In a park above the Kremlin, a statue of Lenin is replaced by a monument to Alexander II, returning to the very spot from which it had been displaced 70 years before.

There is a memorable interview in the film with a sculptor who works in a small Moscow factory, which until recently had made busts of Stalin, Lenin and Marx. Since perestroika the public contracts have dried up and now he produces kitsch figurines of classical sculptures — “whatever people will buy”. Resnais and Marker’s film Statues Also Die also explores this move to commodified production of tourist statuettes in an African context.

To find an alternative vocabulary of commemoration, one that is adequate for dealing with Britain’s legacy of empire, slavery and racism, we must look instead at the practice of memorialisation in the global south and formerly colonised nations, to reconsider memorials to empire from those who suffered under it. 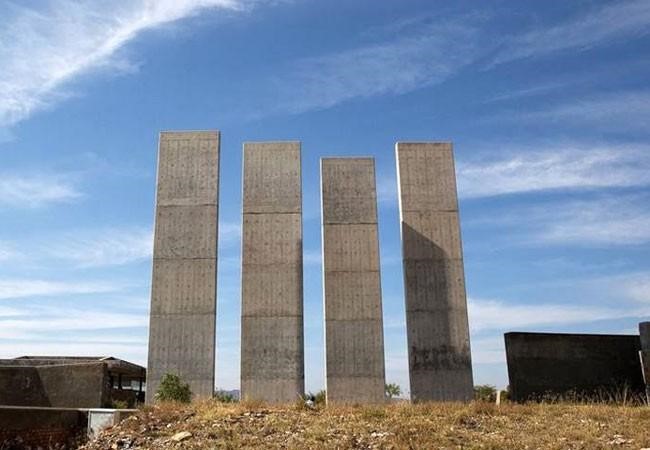 In a remembrance garden in the town of Cradock in South Africa, four vertical slabs of concrete bear witness to four anti-apartheid activists murdered by secret police in 1985. Conventions of Western monumentalism are shunned in the use of plain and everyday material; these were four ordinary people, two school teachers, a railway worker and a childhood friend who was with the group by chance, shot down in cold blood. The monument is stark and insistent, it does not demand reverence or veneration but stands upright in indignant rage at a brutal injustice.

At the foot of Croagh Patrick, in Mayo, Ireland, lies The ‘National Famine Memorial. A bronze ‘coffin ship’ rigged with skeletal figures, it commemorates the Great Famine of the 1840s, ‘and the victims of all famines’. In representing the horror of the famine through symbolic and expressionistic elements, the sculpture does not make a simple indictment but opens up a space for a more complex process of collective mourning and loss. 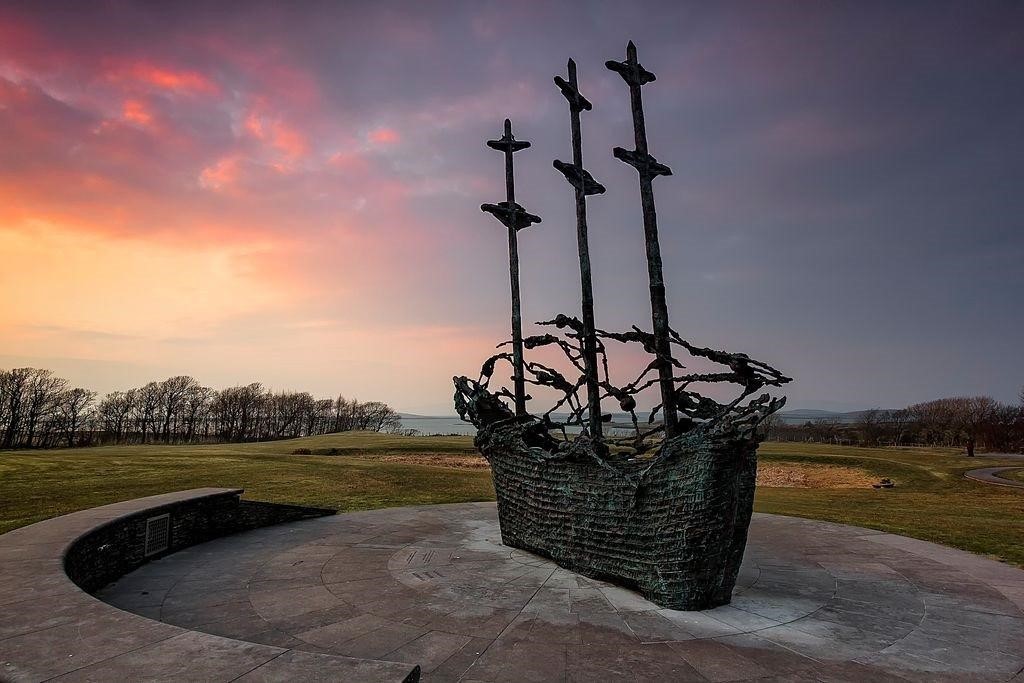 On 22nd May in Martinique, Emancipation Day, two statues of the French abolitionist Victor Schoelcher were pulled down and smashed in the capital of Fort-de-France. “Schoelcher is not our saviour’’ sang the crowds. Though Schoelcher negotiated the bill that abolished slavery in the Caribbean in the 19th Century, he also decreed that slave owners be financially compensated to the sum of over one and a half million francs for the loss of their human captives.

Away from the fray, in a quiet field on the south west coast of Martinique a triangular arrangement of fifteen hunched figures look out onto the sea, at the spot where in 1830 a slave ship sank with 40 slaves shackled on board. The very site of Anse Cafard Slave Memorial encourages contemplation — this is not the municipal site of power of the town square; visitors are encouraged to walk among the eight foot statues. The sculpture focusses on the dignity of the lives who were enslaved by traders like Colston and ‘freed’ by men like Schoelcher. 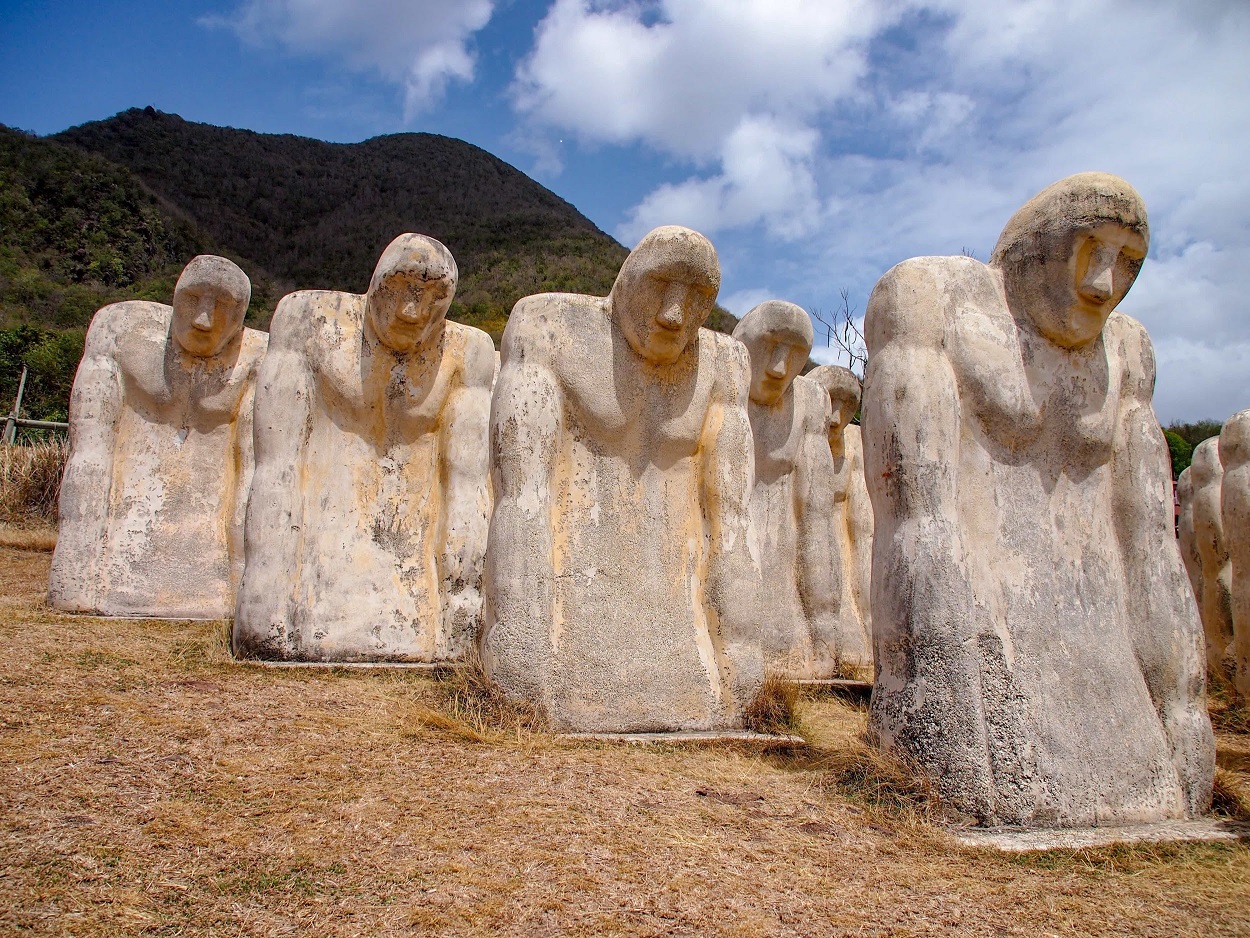 The examples above provide an alternative vocabulary to memorialise the incommensurable violence and suffering caused by colonialism and empire. They emphasise the collective over the individual, contemplation over veneration, human loss over heroic triumph.

Occupying the symbolic realm, statues help us frame and interpret the material world we live in. Over time they tell us which stories and which lives matter. The appropriate aesthetics for this historic moment are not those of triumphalism and heroism, based on historic delusion, but memorials which encourage reflection and confrontation with Britain’s imperial past.