Now, at this point when most series TV has moved online and the autumn TV season is a thing of the past, a relic of - what did your parents used to call it? - oh yeah, network TV.  That quirky period of television history where three behemoths strode across the TV landscape forever locked in a death grip that mostly yielded copies of whatever was the latest hit on the other channel.

Yet another nail was driven into the coffin of this kind of traditional television, as opposed to boutique pay-by-subscription streaming television, at this year’s Emmys. For the first time, Netflix beat even pay cable TV favourite HBO by a margin of 44 to 19 – a score that would be labelled a rout on a football field.

In addition, the streamers, supposedly free of network TV restrictions, have initiated what amounts to their own subscription drive, with each attempting to outdo the other in big special event series that also brand the company.

The greed and murderousness of drugs companies

There is Apple TV+’s celebration of the wonder of technology within a declining empire, in Isaac Asimov’s Sci-Fi-classic Foundation. There is the conservative company Comcast’s Peacock with a reactionary “War on Terror” overlay on Dan Brown’s The Lost Symbol, and Amazon with a fourth and last season of David E. Kelly’s Goliath, which rightfully and insightfully attacks the greed and murderousness of drug companies while also nicely tilting the spotlight away from Jeff Bezos and Amazon.

All however fail to match the splendour of the remake of a network TV sitcom The Wonder Years on the terrestrial channel ABC (owned by Disney and part of its “diverse” family strategy), this time with a Black family and set in the revolutionary period of 1968.

It’s hard to overestimate the contribution this remake of the popular series, which began in the late 80s and also was set in the 60s, makes to a deepening and politicization of the standard sitcom. Don Cheadle’s voiceover narration begins the episode, as we watch the 12-year-old Dean Williams peddling home in a middle-class post-segregationist Black neighborhood recounting “the talk,” – not about sex, as might be the topic of the original series about a would-be white writer, but about how to behave in a Black boy’s first encounter with the police.

The somewhat nerdy Dean is positioned in typical Malcolm in the Middle sitcom mode between an athlete older brother and a beautiful popular debutante sister, feeling he will never live up to either. However, the twist here is that he is also positioned between them politically with his absent brother away in Vietnam and his sister becoming radicalized. A photo dropping out of her high school textbook shows her with a gun in a Patti Hearst pose and choosing Eldridge Cleaver’s Soul on Ice over her SAT prep manual, after a momentous event which rocks the family

Also emphasized is that “post-segregationist” America is no less racist. A wonderfully telling scene has Dean, and his Black and Jewish friends at the school water cooler – which a white girl and boy then avoid. In a nod to female emancipation, Dean is about to try to rescue his “crush,” the girl he adores, from an aggressive male bully when she instead grabs the bully around the neck.

The one stutter step in what is a near perfect 21-minute script by sitcom veteran Saladin K. Patterson, has Dean expressing anger not at the further disenfranchisement and futility of a political assassination, but at seeing his crush with another boy.

The sequence is scored to the 5th Dimension’s A Change Is Gonna Come and let’s hope the show will continue to integrate its social agenda with the typical coming-of-age story in a way that makes this series a new take on the old sitcom formula, surpassing the original and aided and abetted by the superb direction of the 80s Wonder Years’ child actor Fred Savage. 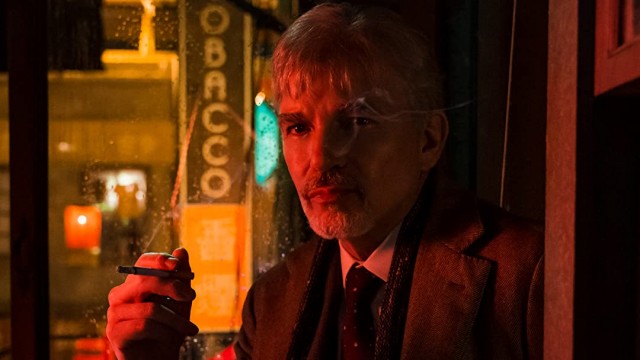 There is a lot of moralizing about the savage viciousness of drug companies such as Purdue Pharma, perpetuator of the opioid crisis, in the fourth and final season of Amazon’s Goliath. It’s all warranted of course, but also works to shine a better light on less murderous worker gaugers – such as the show’s parent company, which this week was revealed has carried its super-exploitation of its employees into Amazon’s space division as well.

Nevertheless, this is an extraordinary final season, that does a superb job of wrapping up this series about a self-destructive, alcoholic lawyer (Billy Bob Thornton in one of his greatest roles) who also happens to be a brilliant legal mind and who enjoys sticking it to corporations.

The series does not focus on the near-peddling of Oxycontin on an unwitting population – though a lead lawyer’s daughter has died from becoming addicted – but rather on an underreported aspect of the crisis. This is the way lawyers on both sides collude to fix a settlement price that amounts to mere peanuts for the companies involved and, in that way, prevent the most damning aspects of company policy from ever emerging in court.

Because there is so little government regulation – a main point that emerges is that the companies do their own drug testing which federal regulators then approve – corporations more than ever fear a jury trial where they will be dragged before the public. Billy, the recalcitrant lawyer, is appalled that over the last decades the amount of civil suits that have gone to court where companies must face the public, have declined from 20 to 2 percent.

Settlement and not airing the companies’ dirty linen is clearly a priority. There is an initial whistleblower who describes the way the drug companies championed sales to doctors, including a lavish musical production number extolling the drug’s painkilling virtues. But this is common knowledge and well covered, especially in Alex Gibney’s two-part series Crime of the Century, part one focusing on drug company creation of Oxycontin, and part two on the creation of its even more dangerous cousin Fentanyl.

The series was created by David E. Kelly, known for his stunning courtroom surprises. The finale does not disappoint, with Billy struck off the case and a stunning summary by a surprise witness sinking the Purdue Pharma and Sackler stand-in company. Billy says of Zax, in his most damning indictment of the drug companies as a whole, “He’s not in the pain relief business, he’s in the addiction business.”

The show also makes cinematic use of San Francisco, with its foggy, shadowy menacing exteriors where everyone is monitored, and with long takes on lavish corporate interiors that are the lush opposite of disjointed life on the streets. It references Rear Window, Chinatown and directly quotes from High Noon and 3:10 to Yuma, while also being an acting compendium with Billy Bob Thornton facing off in a multitude of scenes with his acting mentor Brue Dern.

Peacock’s splashy fall entry is an adaptation of Da Vinci Code author Dan Brown’s The Lost Symbol which contains the Dan-Brown required trap doors, hieroglyphic imprints and shadowy cult villains, in this case the Masons. These old reliables work well enough, but there are two problems. 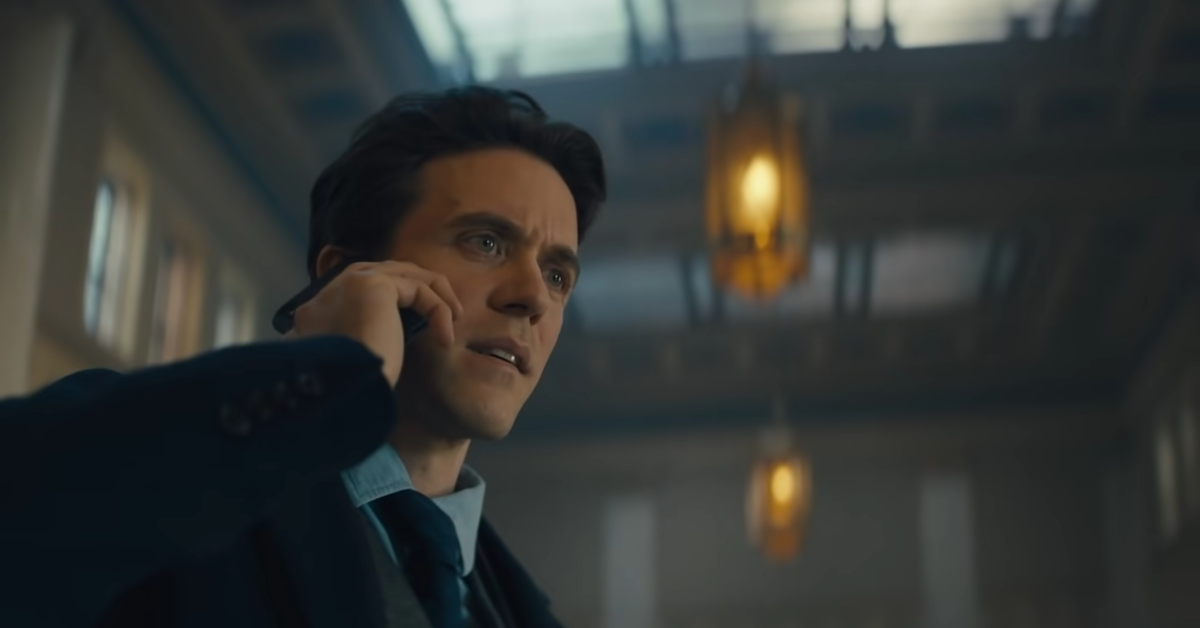 First, Comcast’s overlay of the now outmoded (if ever relevant) “War on Terror” on these shenanigans. The series opens with a reverse Abu Ghraib, with Muslims beating an American prisoner in a Turkish jail, which casts a pall over the series which is never quite dissipated and which feels like an extraneous and conservative sheen on the plot.

The second problem is the actor Ashley Zuckerman, playing  the young Robert Langdon, in a decision to turn back the clock. Brown is famous for his papier mâché characters who decode one symbol and then rush to the next. Even so, this Langdon is extraordinarily lifeless, affectless, boring, and without a trace of humor. At least Tom Hanks in the two films had a kind of smarmy Everyman morality that you could either love or hate, but here the writers completely abandon their job of fleshing out this lifeless Harvard quasi-archaeologist character, who makes Indiana Jones seem like Hamlet (or in the latest iteration, Lear). 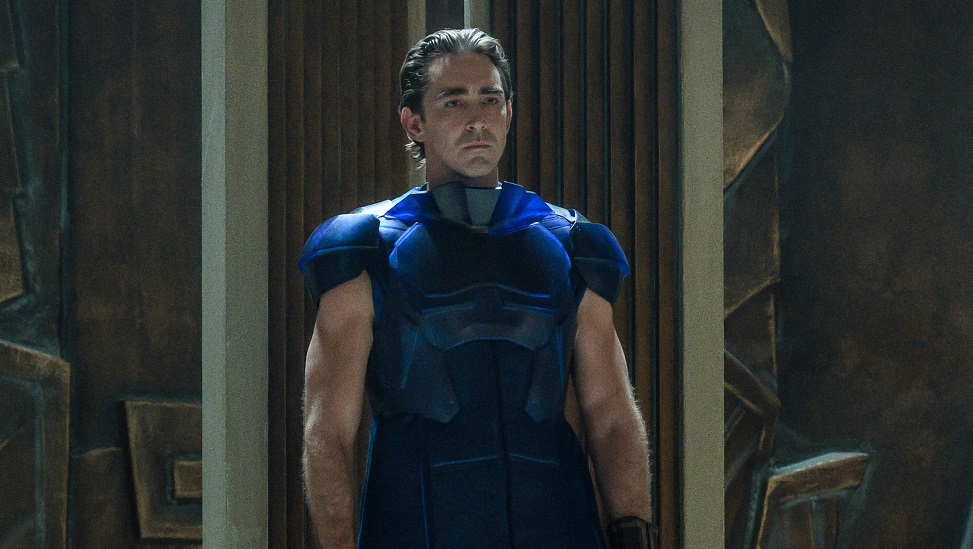 Royals in Space and a third-rate Loki in Foundation

The least successful and the silliest of the major series this Autumn is Apple TV+’s Foundation, based on the Isaac Asimov trilogy, about a future world where algorithms reign supreme. The empire has become a kind of cloned Dupont dynasty, inbred, self-perpetuating, decaying and under attack not by actual rebels who want to overthrow the imperial reign but by mathematicians who predict the empire will collapse and then move to try to preserve it and “civilization” against the self-destructive urges of its incestuously cloned leaders.

What better advertisement for Apple, a Silicon Valley company par excellence, which presents itself as outflanking government in both managing the future and preserving the integrity of its users? The phony British empire overlay – this is The Crown meets Star Trek, or Royals in Space – is heavy-handed, with the ultimate imperial villain, called “Empire,” scene-chewing as a kind of third-rate Loki.

A word about The Crown: “Yuck.” The success of this Emmy darling and British and U.S. fetish, with two actresses winning successive awards for playing various stages of the life of Queen Elizabeth, can probably best be explained as Elizabeth’s ‘grace under fire,” – the way she bears up under the fall of the British empire, as the American empire is itself in the process of crashing. Both sides of the Atlantic lionize an institution whose sell-by date has long since expired and which owns vast estates in the United Kingdom, while working-class tenancies deteriorate and homelessness abounds. The American royal equivalent is Bill Gates, who now owns large amounts of the country’s farmland.

The series does retain some of Asimov’s reverence for science, but often the special effects are gimmicky and leaden – it all adds up to a sort of 2001, A Space Odyssey: The Podcast. Finally, a 9/11-type terrorist attack on the empire with towers collapsing does not have the effect of say the pilot of Battlestar Galactica with everyone having to flee the planet. The main problem here is the ambivalence about preserving what amounts to a fascist empire, the same empire Apple is both building and helping to undercut as it moves itself to outflank all forms of government as it defines “civilization” not as culture but as algorithms.