Rod Stoneman discusses the possible privatisation of Channel 4, and options for democratising and radicalising the channel

Any thinking about the government’s proposed privatisation of Channel 4 should start by linking the future of the station with its past.

In 1982 its guiding precepts were innovation and extending the range of British television – these are still valid principles. Invoking its inception and early years is not an exercise in nostalgia, but begins from an awareness of the entirely different context of broadcast media now and indeed the important changes in British society that have taken place in the last 40 years.

The idea of ‘innovating in the form and content of programmes’ and the remit to ‘reach new audiences not catered for currently by British television’ was underpinned by a unique structure that allowed the new Channel to be funded through advertising, but within a publicly owned company on a not-for-profit basis.

These principles are still valid as audiences undergo a shift towards international streaming and subscriber services, a phenomenon greatly accelerated by the pandemic. There are huge areas of creativity, thought and opinion, style and culture unrepresented in mainstream media – new groups and movements, new generations and perspectives which do not have a voice in a sustained way. The media’s belated address to the climate crisis has a great deal of ground to make up and there are missing contributions to the ‘culture wars’ debates and complex questions of sexuality and gender that are being fiercely argued, but not in the public domain, outside of the highly distorted versions of social media. 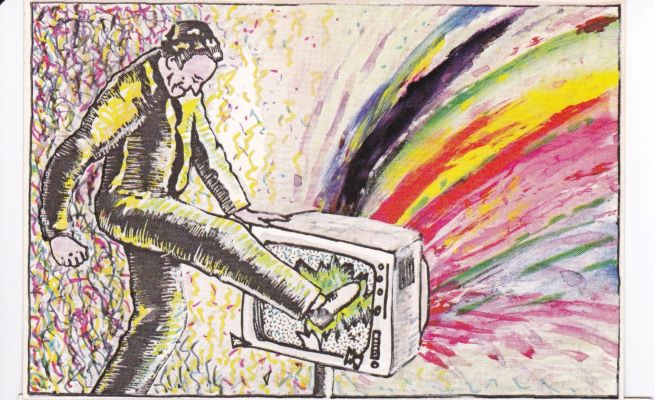 Other groups endure absence and caricature; working-class communities face stereotypical representation and an increasingly uphill struggle to progress in careers in the broadcast media. Jack Thorne’s MacTaggart lecture at the Edinburgh Television Festival this year about the scandalous lack of representation and deplorable prejudice against disabled people is a recent and specific example.

57 channels and nothing on

Culture Secretary Oliver Dowden’s assertion that ‘four decades (after Channel 4) choice is no longer a problem’ is highly disputable: paradoxically, as channels have proliferated choice has narrowed. At many points in the day broadcasters can only offer multi-channel forms of short-term distraction: ‘57 channels and nothing on’, as Bruce Springsteen put it. The notion that television with a market-led approach fulfils audience needs is a dangerous delusion. It is defended by its supporters as democratic, but in fact operates as a self-fulfilling prophecy which gradually closes down the space for public debate.

The possibilities of digital access to other material via the internet is only part of the answer. The internet offers a Hyde Park Speakers’ Corner with the improvised, fragmented shouting of self-appointed experts, and social media appear to be a tower of Babel without structure or coherence. A key function of public service networks is to connect audiences and enable them to find programmes – production and marketing budgets play a huge role in attracting audiences, especially in the epoch of curation by algorithm. There is awareness of this in Ofcom’s ‘Review of Prominence for Public Service Broadcasting’ published in July 2019 with a set of useful recommendations to ensure knowledge of and access to Public Service Broadcasting (PSB) programmes.

One route to a closer relation with the audiences is through a regional presence. Recently Channel 4 announced plans to decentralise its activities choosing to locate bases in Leeds, Bristol and Glasgow. Any future private owners are likely to close down regional offices as extravagant and unnecessary. ITV’s history of regional broadcasting was eroded after the 1996 Peacock Committee proposed the basis for corporate consolidation through the amalgamation of regional companies. When in the 1980s Channel 4 funded a network of 15 regional workshops the underlying notion was one of encouraging ‘direct speech’ initiating a shift of power and participation whereby a community of interest could define and express itself on television with minimal mediation. It is even more important now to counter the global dynamics of the internationalised media economy and ensure some broadcasting is reflective of the regions and nations, rural and metropolitan communities.

The first decade of Channel 4 provided mass audiences with opportunities to encounter experimental film, feature films from Africa, Asia and Latin America, feminist magazine programmes, academic lectures and political views from across the spectrum. And a new version of Channel 4’s role as complementary and exploratory version of public service television can continue in a new context with new forms of viewing. Ian Katz, the present Director of Programmes, reiterated the Channel’s commitment to making

entertaining, mischievous and innovative shows about the big issues and arguments in Britain today… At a time when the room for civilised public debate, for asking the most difficult questions, often seems to be contracting, I hope we are making space for the arguments and issues that others won’t.

A significant shift in programming would undermine the assumed centre of gravity to counter the dominance of escapist distraction in television culture. Screening a variegated and pluralist set of programmes which allow the silent voices, including those from south of the planet, to speak directly would extend the range of available television and enliven the airwaves.

These issues have been brought into focus by an open invitation to respond to a Government consultation on the privatisation of the station. The basis is clear – the Government’s preferred option is to ‘facilitate a change of ownership of Channel 4’. One is tempted to invoke the Scottish poet and conceptual artist Ian Hamilton Finlay who elegantly formulated the limitations of liberal democracy’s freedom of expression in one of his ‘Detached Sentences on Revolution’:

For many organisations, including the government, the whole process of ‘public consultation’ has now become a process of ‘softening up’, or at best ‘education’, before proceeding with a predetermined course of action. First they decide what the answer is … and then devise a process of consultation in order to arrive at that answer.

We could also imagine and propose that Channel 4 explores forms for the democratisation of television. Its new regional basis could be the starting point for input from ‘communities of interest’: diverse producers, workshops, viewers. It clear that digital technology opens new possibilities for access and creativity from an enormously wide range of groups and individuals. Productions with radical content made with minimum budgets could hold their own through invention, style and imagination. The pervasion of traditional notions of ‘professionalism’ often presents barriers and unnecessary exclusions.

The renewal and strengthening of Channel 4’s remit is timely at a moment when public service broadcasting needs to reimagine and reinvent itself. The BBC approaches its 100th anniversary and PSB needs the complementarity of a more manoeuvrable, agile station, a catalyst with a dynamic effect on the ecosystem of broadcasting – to ensure, in the government’s own words, ‘the country has a diverse, free and pluralistic broadcasting landscape’.

At the risk of stating the obvious, it is especially important that there is a healthy broadcasting ecology in Britain at this time of such rapid and turbulent change. Channel 4 can reinvigorate mainstream television by making a risk-taking contribution of more imaginative, more politically responsive and aesthetically daring forms of programme making.

The privatisation proposal is part of a bigger process; in 1992, while I was working for Channel 4, I wrote that:

the Conservative government tends to construct haphazard legislation designed to release market forces which themselves, in the longer term, led to new, more congenial and conservative configurations. This is a subtle, British way of reshaping broadcasting in an ideologically more amenable form.

Thirty years later I’d like to think that a concerted campaign can reverse this Government’s destructive move.

Rod Stoneman was the director of the Huston School of Film & Digital Media at the National University of Ireland, Galway. He was previously the CEO of the Irish Film Board and a deputy commissioning editor of the Independent Film and Video Department at Channel 4.