Anthony Padgett is an award winning writer and artist and a North West Representative for the Artists' Union England.

“Hold tight” I call as we ride on my vintage motorcycle through the steep terraced streets of Lancashire towns. My last day of freedom as I lose all my work to the Coronavirus crisis. We pass the tall spires of a church converted into carpet shops. A few streets onwards, glimpse the copper dome of a newly built mosque, and a few streets more. We head past factories converted to student flats. On, into the countryside, where signs point to stately homes. Enjoy your tourist’s trip. And look for the ghosts.

The seventeenth century priesthood controlled the Bibles, written in Latin, until the printing presses were used to spread translations far and wide. And so the Protestant Reformation began. George Fox and the Quakers around Cumbria and Lancashire, an example of the new following of individual conscience and freedom of belief.

See there, on that Morecambe Bay headland, my sculpture, the “Praying Shell” (2013) a figure which kneels in prayer as its shell-like body opens to the spiritual.

The eighteenth-century factory owners of the Industrial Revolution controlled the machines. Many of the journeymen weavers of the Lancashire cotton industry worked piecework and were against the introduction of machines that took their jobs away. So they became Luddites, smashing the new inventions to protect their livelihoods. Before long they were forced to move into the cities to work in factories. There they began to organise into unions and collectively bargain for better hours, pay and conditions, and the right to vote. The founding of the Trades Unions Congress in Manchester in 1868 was a move to protect workers’ rights and conditions.

See there, on the sands where the “Praying Shell” points, where 23 Chinese cockle pickers died in 2003, after working in worse conditions than one hundred years before.

Enough seriousness. Let’s go to the cinema. That Art Deco building, that’s now a DIY shop. We can buy tins of paint while we reflect on the twentieth-century media barons’ control of culture through records, film, and radio.

In “Dream World of Mass Culture” Susan Buck-Morss said that cultural critic Walter Benjamin proposed that the world of images produced by consumer society has a limited life, and is continually replaced by newer fashions and images. This change opens up the idea of radical, rather than just superficial, change that lies at an unconscious, mythic, level. This was not to return to a pre-industrial nature but make a radical reconstruction of the fragmented reality of industrial society: (1)

That was all in the 1930s. Let’s get contemporary and go to the art gallery. In that building, the one that looks like a museum, or a bank. It’s full of paintings of the aristocrats, their lives and beliefs. The posters outside promote eighteenth-century English painting, abstract art of the early twentieth century, and radical performance of the 1960s.

Art, that old dinosaur, where wealthy commissioners buy artworks and fund public exhibitions. The nineteenth-century workers understood the representational images they were told to revere and revolted against them. And the 1917 Russian revolution saw a new style of art, where avant-garde abstraction destabilised tradition in painting and in thinking. Kasimir Malevich and Wassily Kandinsky moved away from classical, narrative representation in support of abstractions and political and spiritual revolution (3). Then artists began to copy, to represent abstraction and it became a commodity rather than a breaking of structures.

Mmm, would we prefer the challenge of 1960s body performance around political issues? Where actions, demonstrations and protests were seen as anti-art? Until it was photographed, commodified and turned into the gallery art. I’m sorry if I disappoint you to point out that the photographs are on sterile, white walls. Protest seems to be great, as long as it doesn’t rock the art boat.

We can’t get in the gallery, anyway. So let’s see some public art. 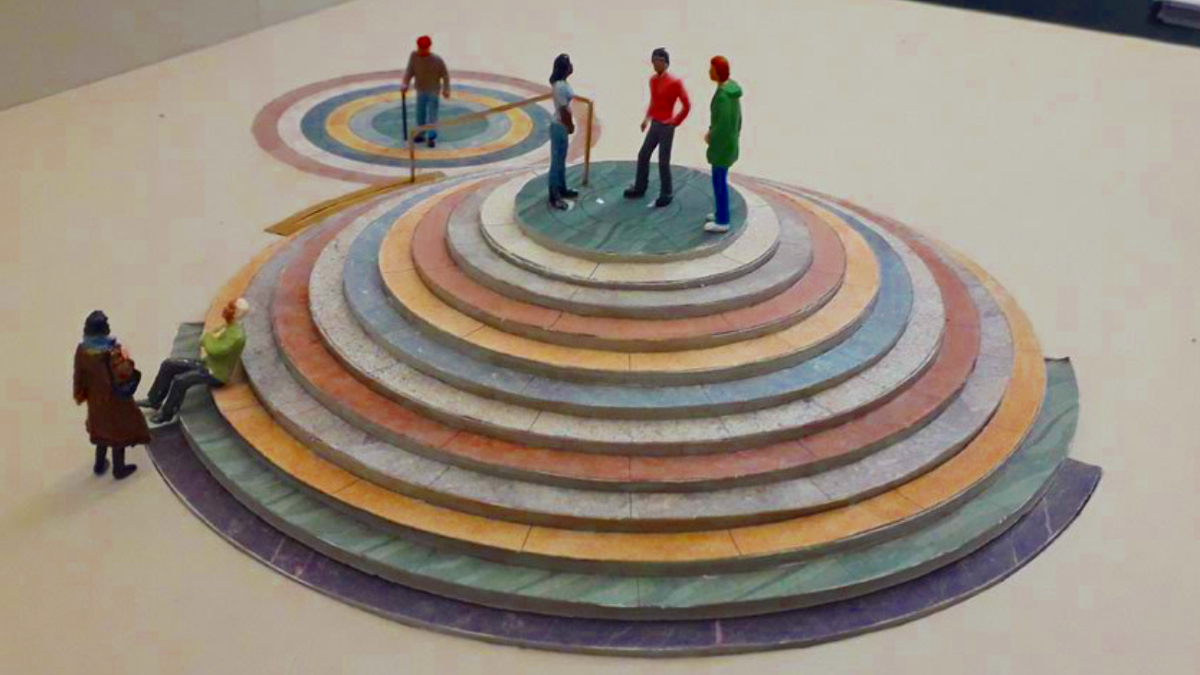 Here we are, at the base of Jeremy Deller’s “Peterloo Memorial” (2019) a series of concentric engraved stone platforms, in St Peter’s Field, Manchester. It marks the 1819 Peterloo Massacre, when 60,000 to 80,000 people (forerunners to the unionists) peacefully demonstrated for the right to vote. And how the yeomanry on horseback killed 18 of them.

Don’t tell anyone, but Deller’s work doesn’t have an access ramp, so disability activist Dennis Queen “called for protest groups to show solidarity with their cause by not going to the top of the monument until they too can access it.” And whilst it seems like the work is a memorial in a language that most people don’t understand, to them it is just inaccessible steps. Deller has created other union-themed work like his “Battle of Orgreave” (2001). Though, to be fair, he has been approached on numerous occasions to join the Artists’ Union of England and has never replied.

I wonder who the work really speaks to? The general public or the art collectors. It seems to be a gesture that no longer has the political power of the avant-garde. Henry M. Sayre wrote about this kind of work, calling it trans-avant-garde, saying that it appears be ground breaking and new but just reinforces old art ideas. And that this is just another commodity in the art market with no deeper political intention. (4).

So would working-class identity art from an upper middle-class artist be an appropriation of the identity and, whatever the conscious political intention, be devoid of political potential? I don’t know. But I do know that I, from a comprehensive, now feel less a voice of the working class than the public school educated Jeremy Deller. Who it feels like has become a voice for me.

Let’s ride past the university you went to. Were you lower-class and became middle-class by education levels? Me too. But I stayed comfortable-class, whilst some of my friend who didn’t go to university became rich-class.

And for a few years I was working-class despite being non-working – a mere government artist “drawing the dole.” And conversationalists in the upper middle class now discredit the title “working-class” by pointing to the fact that they work as hard as anyone. And would certainly think they worked harder than I did.

So how do we get into that upper middle-class gallery system – I wish that the curators would give me some feedback. Or listen to my feedback to them. And whilst these museums of curated corruption and oppression might gently rock, they stand untouched.

With the general defence that “art is subjective”, “it’s just what you feel” all just reinforces the idea of the connoisseur the person with an aristocratic sensitivity who knows better than the rest. The connoisseur’s background gives them this knowledge and insight. But the real basis of art criticism is who you know and what college you went to. Criticism is now used to justify what has already been accepted as good.  If you learn the game of art criticism, which I have tried to, you find this is no way in. Try and object and you will be ignored in a wall of silence. 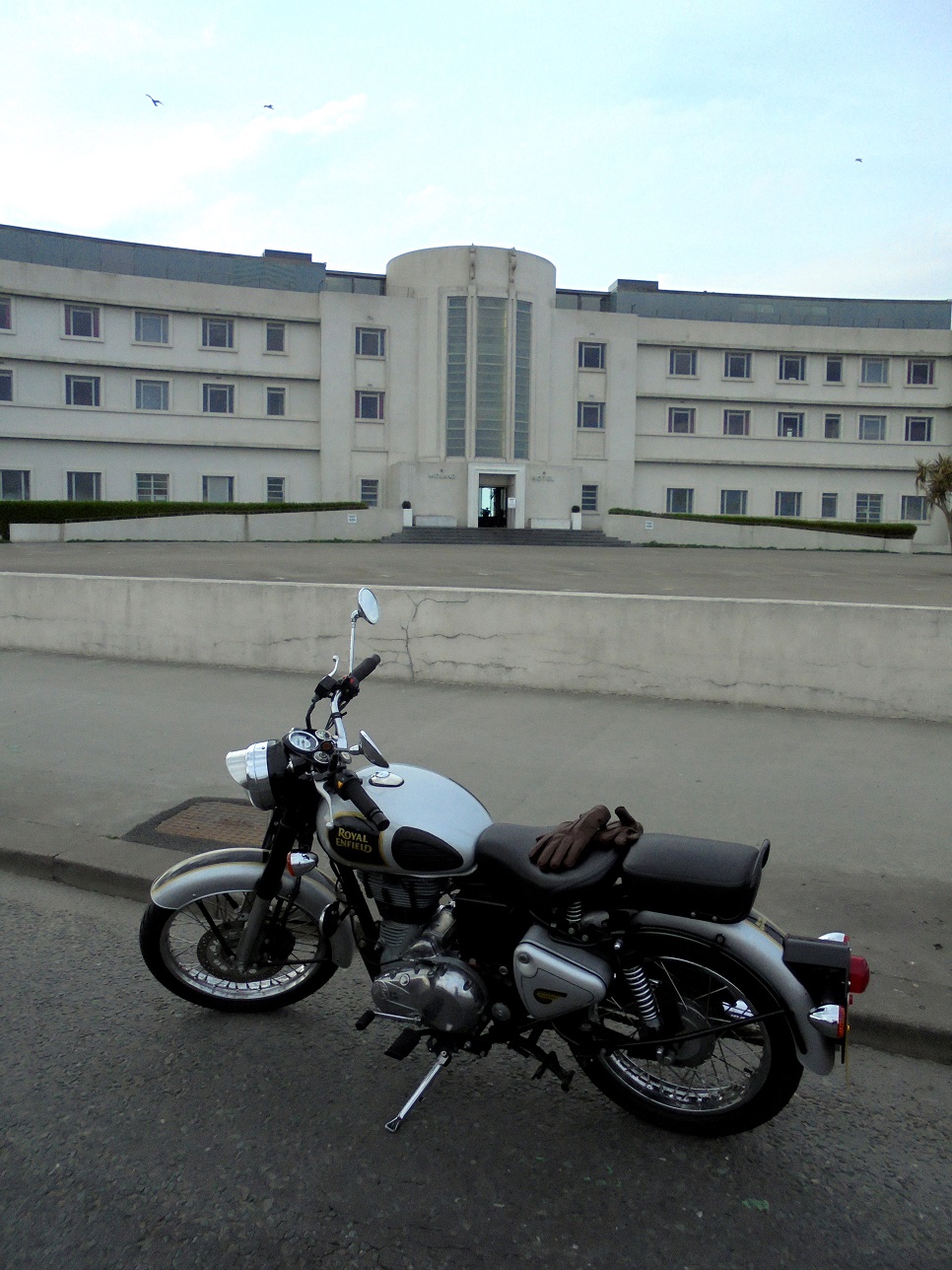 So where to next on the bike? Back home before the Covid-19 curfew. To be stuck inside with our computers when we need to travel out of Walt Benjamin’s Dreamworld. Like the rebels in the film “The Matrix”(5).

We can dream an online possible dream. That united, artists can be valued. And, that if we harness the power of Artificial Intelligence, a union of artists can break through the systemic nepotism and cronyism. Or we can wake up and find we are divided and ignored.  With A.I. controlled by the institutions to reinforce their power structures.

Already A.I. can decide what is quality, innovative and original. It can sort 77,000 images of paintings into historical order based on formal qualities and without any pre-knowledge of that historical order (6). It can determine if artworks are fakes based on brushwork (7). And paintings done by computers have been found indistinguishable from the work of professional artists (8).

This machine painter is a source of threat to artists who, after their disbelief, may secretly fear that they will be replaced. And want to be a neo-Luddite. But it cannot be ignored.

If the eighteenth century technological development brought social alienation and led to the death of God, then maybe in the 21st century it will bring a new community and the birth of a new God. But if we remain stuck in a technological dreamworld then that God might be Hal – not Hal Foster the art critic (9), but Hal the self-conscious computer from the film “2001: A Space Odyssey” (10) programmed to further reinforce the already biased and oppressive structures endemic in the art-world of the rich and powerful.