Michael Jarvie reviews the Norman Cornish exhibition currently on at the Bowes Museum, Durham, and takes in the Silver Swan as well

The Norman Cornish exhibition at the Bowes Museum is a retrospective, marking the 100th anniversary of his birth, and is spread out over three adjacent rooms. There’s a certain degree of irony involved given that fact that the Bowes family were mine owners whereas Cornish was a pitman painter from Spennymoor in County Durham. Moreover, during his lifetime he was subjected to class snobbery from those occupying a more elevated position in the social hierarchy – certain artists, for instance, didn’t want their work displayed next to his. 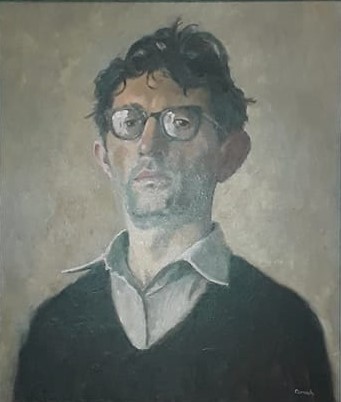 There he is on the left near the entrance in the ‘Self Portrait with Spectacles’. Wearing a V-neck sweater, his shirt collar is dramatically flung open to reveal blue-black stubble, which accentuates the paleness of his skin. Beneath a mass of tousled hair, his angular features are rugged as any rock formation.

Given the high ceilings and airy spaces of the museum, I’m immediately thrust into a cramped and claustrophobic environment in terms of the subject matter. ‘The Pony Putter’ is a case in point. The putter is the man – or more often the boy – who is in charge of the pit pony as it hauls a tub of coal along a stretch of track inside the mine. Cornish himself left school at the age of fourteen in 1933 and was initially employed at the Dean and Chapter Colliery in Ferryhill as a ‘datal lad’ before becoming a putter four years later. He therefore understood what it felt like to be hunched up in a tunnel, riding on one of the pony’s wooden shafts.

Coal mining, with its constricted spaces, has always reminded me of the trenches in World War One. I recall how those skills were drawn upon in that conflict with specialist gangs tunnelling through no man’s land to lay devastating mines beneath the enemy positions. 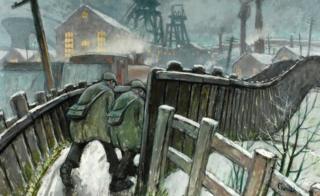 As I wander from room to room ‘The Pit Road’ is an ever-present theme in its various iterations. The distortions in the contours of the landscape are due to subsidence, and the crooked telegraph poles are reminiscent of a crucifixion scene. The men plodding along this familiar route are, as it were, making their way towards their own Calvary. Another nocturnal version of ‘The Pit Road’ pays homage to the work of Vincent van Gogh and his ‘Starry Night Over the Rhône’.

Despite the iconographic importance of the industry in which Cornish worked for well over thirty years, more carefree activities also feature amongst these sixty-odd paintings and sketches. Particularly poignant are scenes from the artist’s home life – of his son and daughter, and of his wife sewing, knitting or simply peeling potatoes. Although he employs pen, pastel and oil paint, charcoal seems the perfect medium given its kinship with the material that was so vital to him in his working life. 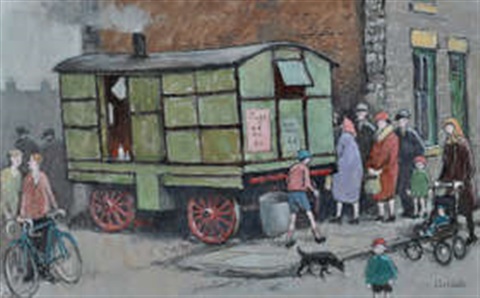 All in all, a sense of community is splendidly realised throughout these paintings. ‘Berriman’s Chip Van’ for instance has a real warmth and vibrancy to it. This horse-drawn chip van, with its coke-fired pans, used to be a feature of the Spennymoor streets where it sold chips and fish cakes. Chips 6d and 8d as the writing on the side of the van proclaims.

Then there are the archetypal images of men playing dominoes and darts, or leaning against a public bar with glasses of beer in front of them and whippets standing docilely behind them. In ‘Busy Bar’ the beer has the same rich hue as the wooden counter on which the glasses are congregated. As I pace from one painting to the next what strikes me is an obsession with the human form as seen from behind.

Outdoor scenes tend to have a chilly feel to them. The sky is predominantly muted grey in colour, never bright blue. Despite the weather there’s always plenty of activity – whether it’s a man riding a bike or kids playing football, and in the back yards of the terraced houses lines of washing hang out to dry.

With my visit to the exhibition at an end, I decide not to hang around until two o’clock to witness the silver swan performing its daily routine. I’ve seen it on a number of previous occasions. Besides, there’s a bus due in half an hour. 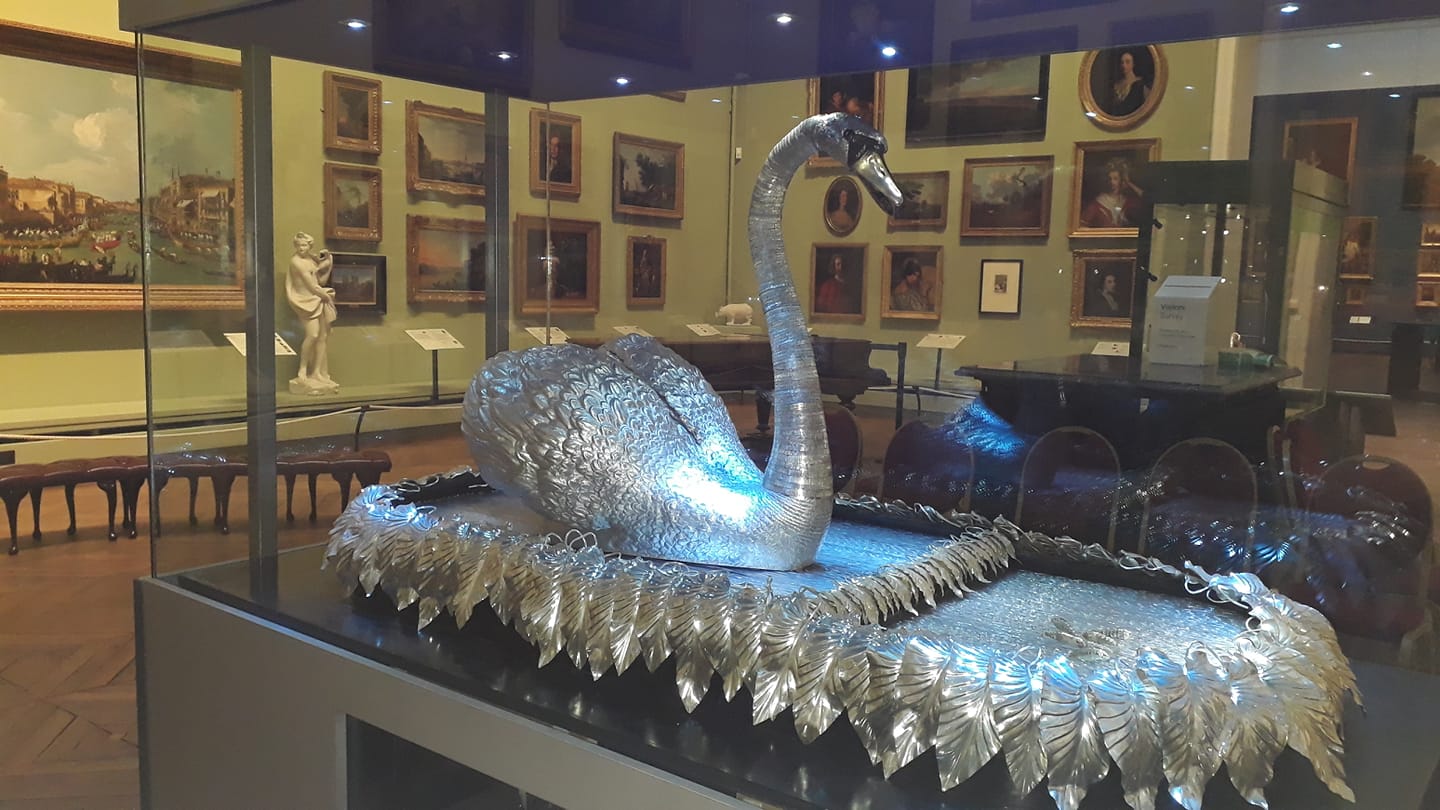 In case you are not familiar with the silver swan, it dates from 1773 and cost John Bowes £200 – over £22,000 in today’s money. Made by skilled artisans and constructed from solid silver, it’s a life-size automaton. It dominates its glass display case and is the embodiment of the natural world sanitised for the benefit of the spectator, not like the ‘nature red in tooth and claw’ of Tennyson’s In Memoriam. The average coal hewer would have needed to work for 500 years to earn that sort of money, and yet Bowes could afford to squander the sum on what is, despite its beauty and exquisite craftsmanship, essentially a frivolity. It’s a clockwork-operated automaton of the kind you might have expected to encounter in J.F. Sebastian’s cluttered apartment in Blade Runner.

Although possessing no concrete evidence, I suspect that the man-hours devoted to its manufacture were grossly undervalued, even taking into account the cost of the materials such as the solid silver for the body of the swan and the leaves that encircle the pond. In total there are three clockwork mechanisms controlling the various movements and a musical box that plays seven tunes.

When after thirty seconds or so the swan reaches into the water, represented by rotating glass rods, and retrieves a silver fish, which it then swallows, we are being offered no more than a conjuring trick. All the while the fish was concealed inside its beak.

The mute swan is therefore the embodiment of the rich man feeding on the defenceless minnows of the working class and living off the surplus value of their labour. In many ways this automaton is the perfect simulacrum of the capitalist – a body without a soul.

The exhibition of Norman Cornish paintings is on at the Bowes Museum, Barnard Castle, Co. Durham, till 23rd February.

Michael Jarvie is a working-class writer from Darlington in County Durham. He is the author of The Prison, a collection of short stories, and Black Art, a novel.