In need of saints

no one else to share my slanted fate. god was
routine unrelenting splendour; too fine and far
a thing to help. nervous and compelled between
the corridor, the alleyway, or any place a slack
luck failed. pain like tearing paper; pain
like biting through a glass. spasm, cramp. on
days that paled to finite shine in ugly towns
of bleak taboo beside the sea. terrible things.
this secret snow inside the globe of me. learnt
to defer to a four-letter word, to the force
majeure of shame. girls conform to the lock-
jaw logic of tetanus – dread for days. afraid
to say, afraid to name, afraid of speech. girls
untongue their stunting curse with silence,
cannot pray. god was an unbodied brilliance
loose in the room, too bright and wide a thing
to help. and christ as pure as a blank page,
the standard hush of libraries. no one else to
share recession’s stink, insomnia, this bare
and complex dark without design. unsteadied
and expendable, where flesh is ghettoed, got,
in bruising schools or trapped in airless rooms
on truant afternoons. a twisted mess of pleats
and seams our stammered lot. and god is
good, but god’s too good, and god aghast
is, faberge and satellite – beaming his gold
nonplus in tempered waves. on days you need
a human hand, a human heart. and what is
prayer? in the ear or in the air? in between
each doubt and grounded wish. the intelligent
shape of noise. what is prayer? a hope you hold
becalmed in the bowl of your own hearing?
insensible shell, the ear that makes an ache
of all my straining for sound. to be received,
just once. it was rita and mary magdalene,
lucia, agnes and Theresa who pulled me up
from joyless aural dystrophy: lost in abject
static – the directionless spite of words
unheard, halfheard, unsaid. to be received.
somewhere, by women like myself, but strong.
saints, our better engines, our comrades,
our sorority. they were my own sleek coping –
there in my mildewed bedroom, coming
and going, a tiered light in their hair, as fast
as doves or monkeys, as tangible as cats. 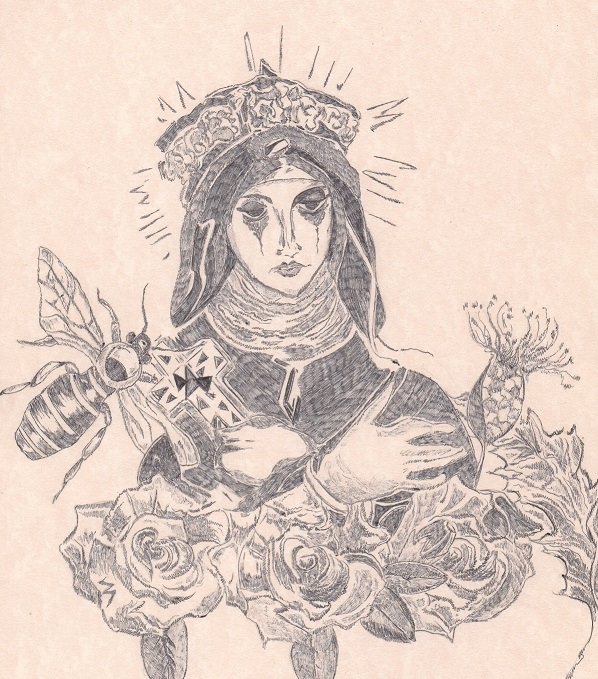 Rita of the White Bees

To Saint Rita of Cascia, Patron Saint of Impossible Causes, and of abused women.

pray for us, for the girls like green splinters, their pierced
reveal unfolding in small towns running on skeleton crews;
for the pageant-hearted girls who burst like bright ideas into
backseats, bikinis, the blessable dream of being human; for
the too skinny stay-awake girls, living on rice wine and red
light, whose home is the typical elsewhere of exiles; for the
lip-glossed gonzo girls, those high femme fatalists, all cried
out; for the lost girls, giddy and groped on, coked to their
stoic ponytails, shiny and slick and swinging like whips; for
the headlong girls, barefoot and bracing themselves in a bus
lane, smiles like Saint Laurent scarves on fire, manic
and vampire; for the girls who went waning in wraparound
glasses to clinics and vigils; for the pub-crawled girls in
packs, in parks and lanes, alive with the loitering joy
of foxes; for the girls who fuck like stray cats come to
sad anatomical terms in the spongy summer nights of cities;
for the girls in ravenous warp speed, spinning, spun, till tears
collect in their cartwheeled eyes like sparks; pray for us, for
wasted girls with workshy serotonin, whose trestle cheekbones
grind on air; for the peep-toed girls with broken heels
and fake eyelashes, trafficking tears at a photo shoot; for
the lookbook, look back angry girls, whose bad day is
a black dress that goes with everything; for the bitch fight
girls, their raw collided atmospheres on fire, all cellulite,
venom, and celebrity perfume; for the girls whose hairdos
are stairways to heaven, whose pigments shiver in vintage
frocks, whose song is a storm in a borderline thought, who
tend their fetishes like flowers; for the girls, most of all,
who are their own witching hour, their jaundiced drama
dragging them down in the bump and grind of a tightening
gyre; for the girls whose vertigo is not the fear of falling, but
the fear of jumping; who are so entirely sick of this mingy,
yelping ethic men call love; for the girls who are no longer
young, whose unmade faces are empty airports; whose
bodies are the quarrels they are having with themselves;
for these girls, their madness lasting them out like a sensible
pair of leather boots. Patroness of Impossible Causes,
pray for us, that we might flip a decade’s deadweight
like a mattress; gather our Godspeed, walk away from
ourselves.

Fran Lock is a poet, illustrator, and political activist. She has written several collections of poetry, the most recent being 'Muses and Bruises', published by Culture Matters.